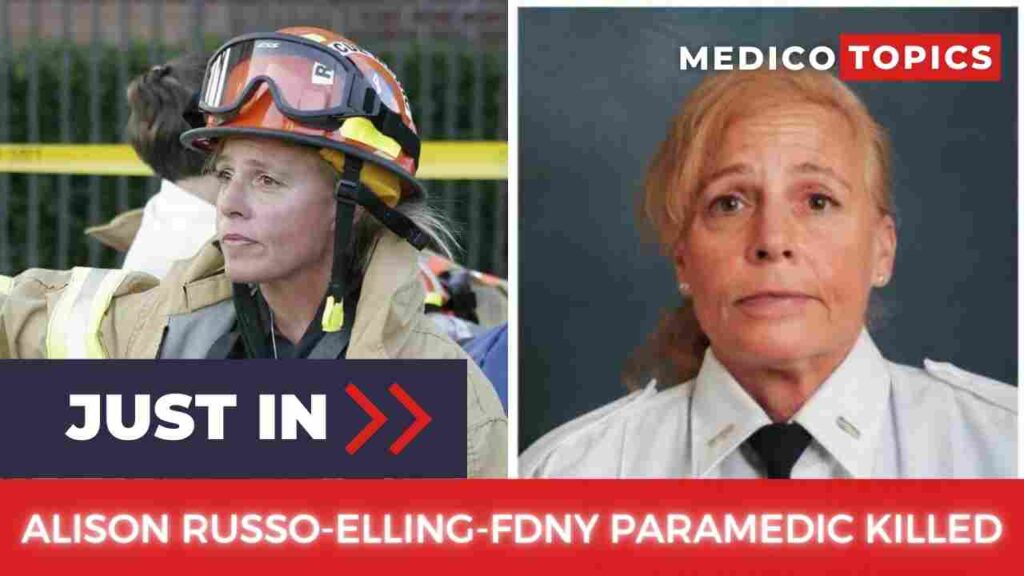 A Lieutenant of FDNY EMS was fatally stabbed in Queens and the suspect was taken into custody. Let’s see what happened to Alison Russo-Elling and who was the suspect in detail

What happened to Alison Russo-Elling?

After a 61-year-old FDNY Emergency Medical Services lieutenant was fatally stabbed in Queens on Thursday, a suspect has been taken into detention.

According to our sister-station WABC, the incident took place in Astoria at about 2:15 p.m.

Police claim that while on duty and waiting outside FDNY EMS Station 49, the deceased, EMS Lieutenant Alison Russo-Elling, was fatally gored.

They claim that the guy, who was dressed in a light grey t-shirt, stabbed Russo repeatedly while brandishing a knife.

When she arrived at Mount Sinai Queens Hospital, she was declared dead.

According to police, the suspect left the area and ran to 19-80 and 41st Street, where he barricaded himself inside an apartment on the third level.

The suspect was persuaded to leave the building by members of the emergency service unit and hostage negotiation team.

What did the witnesses describe?

He was led across the street by police. His face lacked any sign of emotion.

His neighbors describe him as a loner who they frequently saw going around the neighborhood without making any facial expressions.

He appeared to follow a schedule, according to Camilla Groth, a neighbor. “Simply strolling around the block, or perhaps a two or three-block radius, never using his phone, never conversing with anyone, and just being extremely self-contained. I became aware of that.”

He is now, however, charged with shocking violence and an unwarranted assault on a public official.

He was arrested, and charges are pending.

Who was Alison Russo-Elling?

She worked at several EMS facilities throughout the city, including Stations 20, 17, 16, 45, Queens Tactical Response, and 49, where she had been employed for the previous 12 months.

The lieutenant has training in providing pre-hospital emergency medical care and had experience working as a rescue paramedic.

New York Community Mayor Eric Adams said, “We lost one of our heroes. She performed a service to the city for over 24 years. Her assailant has been captured and will be held accountable for his acts.”

Outside the hospital, there was a flurry of sympathy and sorrow.

Members of FDNY EMS met at the hospital to console one another and express their grief. After learning that an EMS lieutenant had been attacked while on the job and had died.

A prayer circle was led by the acting fire commissioner, Laura Kavanaugh, and an FDNY chaplain beside the entrance to the hospital for ambulances. Hugs and tears were abundant.

On Wednesday evening, FDNY officers in uniform were there when Russo’s body was taken from an emergency room.

“The heartbreaking loss of Alison Russo serves as a reminder of the risks that all FDNY and uniformed military personnel must take.

Every FDNY employee is saddened by her terrible death. We bend our heads in unison with our Departmental brothers and sisters and promise to always be there for our FDNY family at this unbearably trying time.
We send Alison’s family, friends, and coworkers our sincere sympathy and condolences.”

Flags at half-staff to pay Respect

On Thursday night, Mayor Adams issued an order for all city buildings to fly their flags at half-staff.

Flags should be flown at half staff from Friday morning until after Lieutenant Russo’s funeral, according to New York Governor Kathy Hochul. The exact date has not yet been announced.

The Russo family will receive a $50,000 financial aid payment from the NY Police and Fire Widows’ & Children’s Benefit Fund, popularly known as Answer the Call.

How did Shehzad Azam die? Pakistan Cricketer cause of death Explained