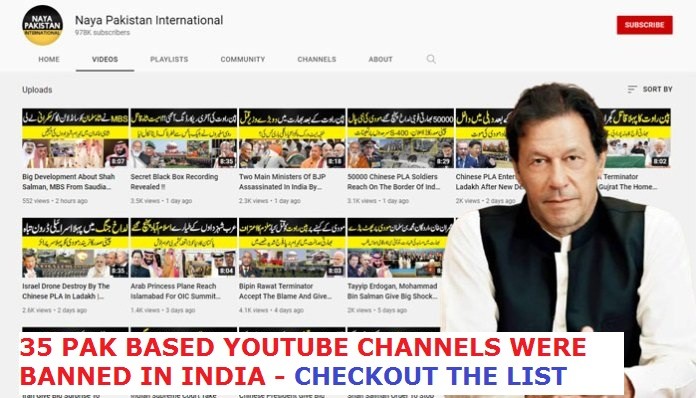 Why Pakistan channels and websites are banned?

After receiving intelligence inputs against 35 more YouTube channels a month after invoking its new powers under the Information Technology (Intermediary Guidelines and Digital Media Ethics Code) Rules, 2021, the Information and Broadcasting Ministry issued orders to ban 35 more channels on YouTube on Thursday.

According to ministry authorities, these stations had over 1 Billion views and were “engaged in propagating anti-India false news in a coordinated way across digital media.”

Five different orders were sent to restrict the websites and YouTube channels, according to the Ministry, and “Indian intelligence services were closely monitoring these social media accounts and websites, and alerted them to the Ministry for urgent action.”

The 35 accounts banned by the Ministry of Information were all based in Pakistan and were part of four coordinated disinformation networks, according to the ministry, which named the Apni Duniya Network, which operates 14 YouTube channels, and the Talha Films Network, which operates 13 YouTube channels. “All of these networks looked to be run with the same objective in mind: to propagate false news to an Indian audience.”

The channels, which were all part of a network, shared hashtags, and editing techniques, were run by regular people and promoted each other’s material. Anchors from Pakistani television news networks ran some of the YouTube channels.

“The stations broadcasted programming that encouraged secession, divided India along religious lines, and stoked enmity among Indian society’s diverse segments.” Such material was thought to have the ability to inspire the audience to commit crimes that would jeopardize the country’s public order,” according to the statement.

According to the government, these channels and accounts were spreading “toxic” and “anti-India” information. On Thursday, the I&B Ministry received intelligence concerning them, so it claimed emergency powers and ordered them to block immediately.

I&B Secretary Apurva Chandra told media on Friday that the channels together have 1.2 crore subscribers and over 130 million views. These were “extremely, very toxic channels,” according to Chandra, and they were all situated in Pakistan.

He described it as a “war on the country.” “A misinformation war.”

The I&B Ministry utilized Section 69A of the Information Technology Act of 2000 to have them disabled.

He said that after obtaining intelligence inputs, the government suspended 20 YouTube channels and two websites in December 2021. On Thursday, “further intelligence inputs were obtained by the government,” he stated. The prohibited channels all had one thing in common: “they operate out of Pakistan and promote bogus anti-India propaganda.” He stressed that the content dealt with “important problems” such as “obsession with Indian Armed Forces, Jammu and Kashmir, India’s foreign ties, separatist thoughts,” and the country’s first Chief of Defence Staff, General Bipin Rawat, who died recently.

“Intelligence agencies are now aware of this issue,” he said, adding, “I’m sure more and more similar lines will be closed now that this process has begun.” He even requested that people provide information to the government for any channels or websites that are participating in spreading such content.

When asked about the role of intermediaries like as YouTube and Facebook, Chandra responded that they are equally responsible and that such content “should be identified in their system.” The ministry, on the other hand, has had a “really excellent reaction” from the intermediaries, he said. When the latest such order was given in December, they carried it out within 24 hours and banned them “at the worldwide level.”

The channels have been ordered to be closed, and emergency powers have been invoked. However, Joint Secretary Vikram Sahay noted that all of these instructions would be reviewed by an inter-departmental committee, which will convene next week. Representatives from the ministries of home, military, external affairs, electronics and information technology, women and child development, as well as members of the Bar Council of India, the Press Council of India, and industrial organizations such as FICCI and CII, are on the committee.

When they got intelligence inputs in December, Chandra said that not all of the routes that the intelligence agencies had identified were closed. After reviewing the content of those channels, ministry officials made a decision, leaving a handful of them off.

Who did Lahore market Terrorist attack? – Reason behind the Bomb Blast

Why can’t you just ignore Omicron as a typical cold? COVID vs Cold vs Flu symptoms