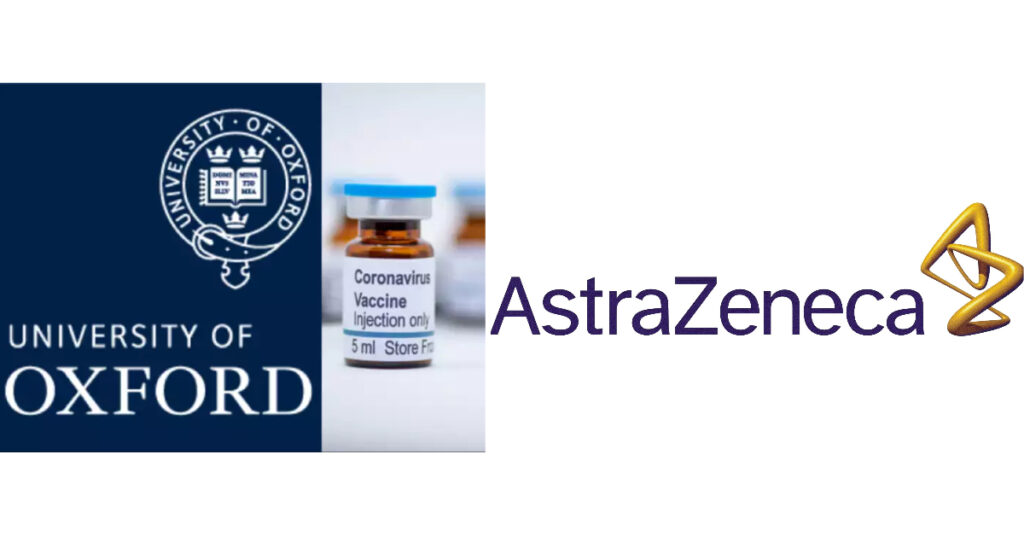 The clinical trial is being conducted across the UK in collaboration with several companies. The University of Oxford made an agreement with the UK-based bio pharmaceutical company AstraZeneca for the further development, large-scale manufacture and potential distribution of the COVID-19 vaccine that currently being trialed by the University.

Oxford researchers are using this vaccine carefully and quickly in clinical trials. The oxford research team called on journalists and activists to remain calm and co-operate as this important work is currently underway.

How did Oxford vaccine develop?

The news was reported to the World Health Organization when a cluster of people was infected with pneumonia caused by an unknown cause.

The eruption was declared a public health emergency of international concern on 30 January 2020.

On 11th February 2020 The disease caused by SARS-CoV-2 was officially named COVID 19.

On 11th March 2020, the WHO declared the disease pandemic.

Many companies around the world have begun to develop vaccines for this disease. This includes the Oxford team which also started working on it.

The vaccine uses a chimpanzee Adenovirus (ChAdOx1) vector developed by Jenner of Oxford. This vector was selected by the team because of its ability to form antibodies in a single dose and it is non-replicable. It is noteworthy that the chimpanzee Adenovirus vaccine vector has previously been used in the preparation of vaccines for 10 different diseases. 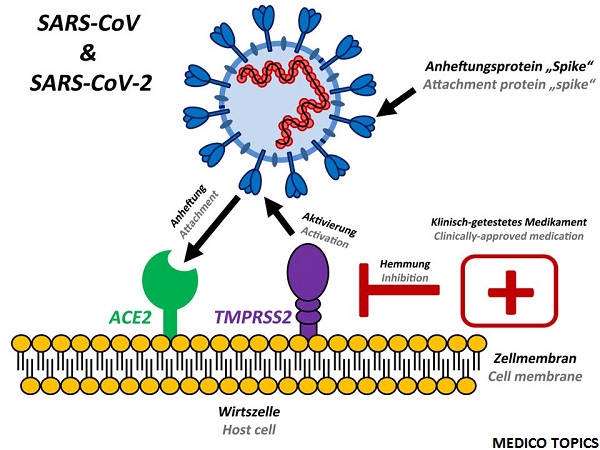 Through previous corona virus studies, Oxford believes that club-shaped spikes in the corona virus may be the best target for vaccines. The genetic code for spike protein in the oxford vaccine is stored inside ChAdOx1 vector.

After vaccination, spike protein is produced and signals to the immune system to produce antibodies against the corona virus. Proffesor Gilbert, a member of the group, was previously involved in the development of the Middle East Respiratory Syndrome (MERS) vaccine.

Researchers at the University of Oxford are working diligently and urgently to develop a new vaccine for the corona virus. If proven effective, a safe corona virus vaccine can save lives by providing an exit strategy for infection.

How long will it take to get the Oxford vaccine to deployment?

It usually takes up to 5 years for a disease vaccine to be developed, tested in humans and approved for use by the public. But at the current stage it is believed that it can be completed within 12 to 15 months if acted upon quickly.

This short-term development of vaccine involves preparation, production, human testing (Phase I, II, III) and approval. Many of these stages can be overcome quickly in the absence of unexpected roadblocks. The University of Oxford uses all strategies to make a vaccine available as soon as possible.

Purpose of this study was to whether healthy people can be protected from COVID-19, whether safety aspects of the vaccine being good, whether vaccine gives enough immunity against Corona.

ChAdOx1 nCoV-19 was the vaccine which was made from a common cold virus (Adenovirus) that causes infections in chimpanzees. This common cold virus was genetically modified and thus it couldn’t infect human. And the genetic information for the Spike protein from Corona virus was injected to the vector. Normally Corona virus’s spike protein is the one which binds with ACE2 receptors on human cells to gain entry to the cells and cause an infection. While vaccinating with the ChAdOx1 nCoV-19 vaccine one could gain the immune power against the Corona virus. 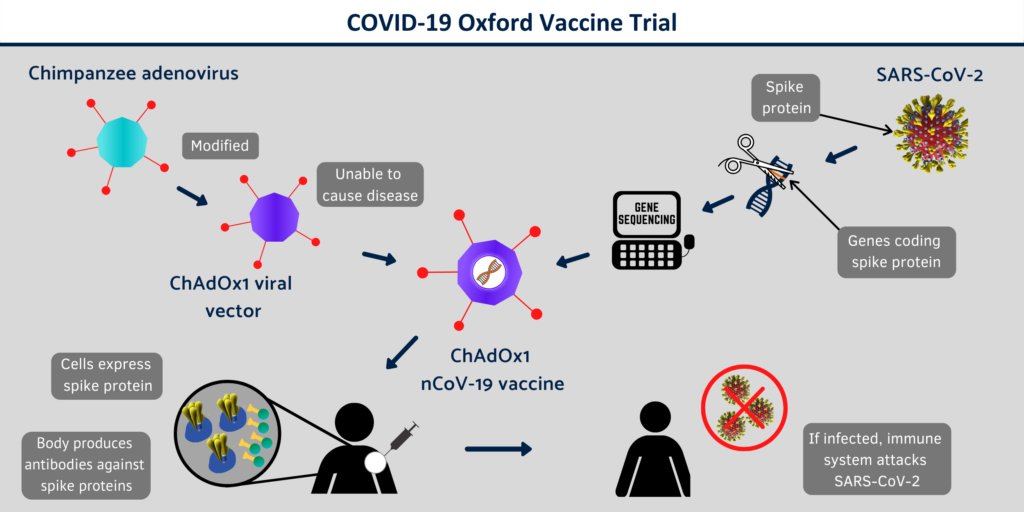 MenACWY is a licensed vaccine which has been given to teenagers in UK from 2015 to protect against from meningitis and sepsis. They chose this vaccine instead a Saline control because it provided same side effects as the Corona vaccine.

After vaccination volunteers were given an E diary to note their symptoms experienced for 7 days. Later they were also recorded their symptoms in the following three weeks.

Purpose of this study will access how people of different age groups could be protected from COVID-19, whether safety aspects of the vaccine being good, whether vaccine gives enough immunity against Corona.

Vaccine test on animals is going on in Australia and UK. Also the collaborators at Rocky Mountain Laboratories (NIAID/NIH) doing vaccine test in the rhesus macaque model.

In total the study involves 10,260 adults and children from UK. Phase II part of this trail involves testing people of different age group. 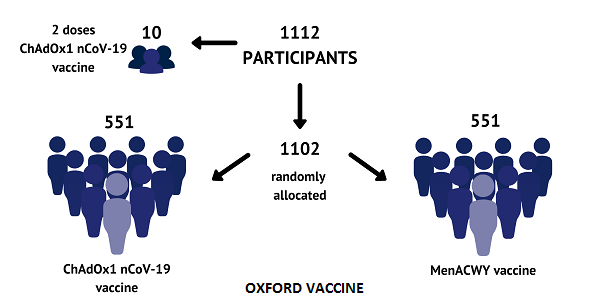 The phase III part of the study involves assessing how well the vaccine works to prevent people from becoming infected with COVID-19 and how the vaccine works in a large number of people over the age of 18. This phase II/III clinical trials held between May and June and the results. Officials from Oxford vaccine group said the results of this trial will be released within 6 months.

On Wednesday 3rd June, the Brazilian Health Regulatory Agency (ANVISA) approved the inclusion of Brazil in the clinical trials conducted by Oxford University and supported by AstraZeneca. There in Brazil 2,000 volunteers is to be tested under this trial. And on 27th June, the clinical trails started there.

Oxford vaccine got approved by the South Africa government to conduct vaccine trails in there. On Tuesday 23rd June, the clinical trials started there.

One side quantity of antibodies were calculated by ELIZA test between vaccinated people and the corona affected patients. 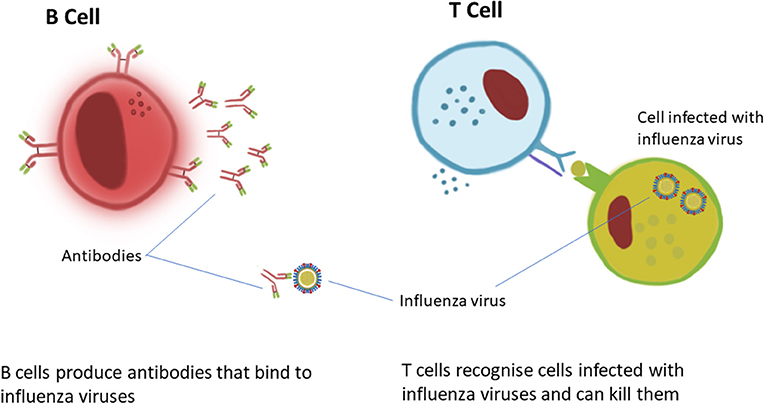 T cells numbers were measured by ELISpot assay. After the 1st dose T cells reached peak at 14 days, Afterwards it sightly decreases. There was no increase in T cells even after 2nd dose after 4 weeks of 1st dose. T cells could be

When will Oxford vaccine be available?

Experts hailed the Phase II / III trial results as “a very important milestone“. It kept alive the hope that a vaccine would be made before Christmas.

Oxford AstraZenaca company made an agreement with Serum Institute of India(SII) to conduct its vaccine trials in India. SII thus named oxford vaccine to Covishield and started trails. After this an unofficial announcement came on August 23, Covishield India’s first Govt Vaccine, will be commercialized in 73 days. Vaccines will be provided free of cost to Indians under the National Immunization Program (NIP).

“The government has given us a license to complete the tests in 58 days. The test protocol processes have been quickly identified. Thus, the first dose of the third phase will be given August 22 and the second dose 29 days later. The final test data will be released in 15 days from the second dose. , “Said the Serum Institute of India (SII). The trial began on August 22 at 17 centers, with about 100 volunteers each, among 1,600 volunteers.

Meanwhile, Health Minister Harsh Vardhan said, “a vaccine will be developed by the end of this year.”

What will be the cost of Oxford vaccine?

The University of Oxford has previously announced that in the UK they will provide the vaccine at low cost or without cost as per government guidelines.

The Serum Institute of India, a manufacturing partner for Oxford Vaccine at Oxford University, has announced that it will be available to low- and middle-income countries, including India, for $ 3 or Rs 225. 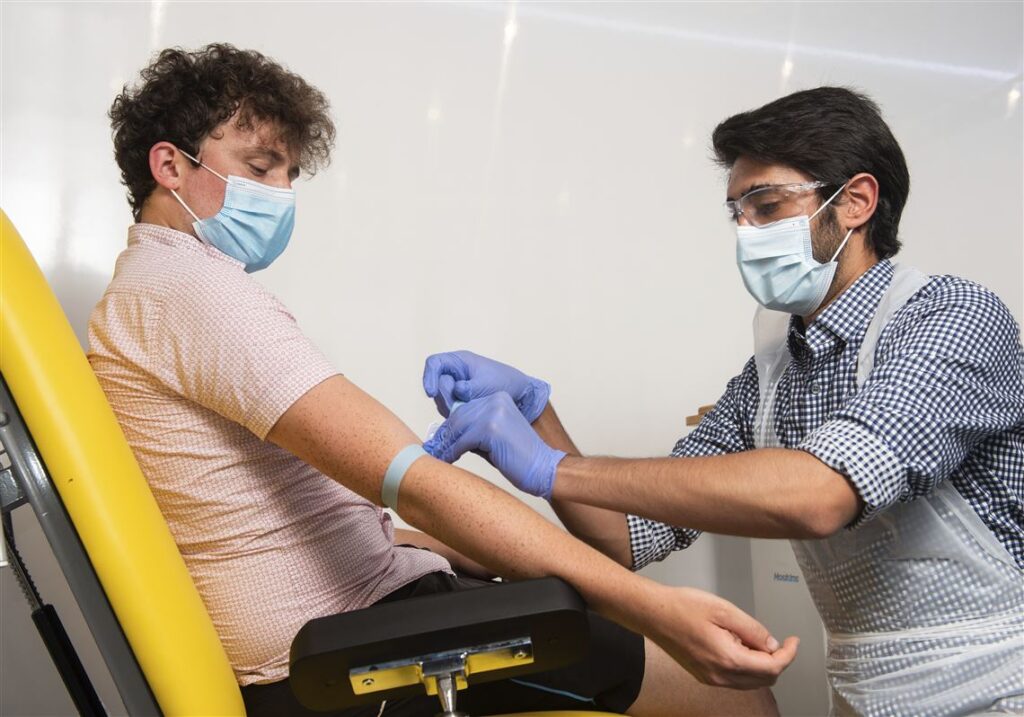 Who will get the Oxford vaccine first?

According to health experts around the world, front-line workers, including health workers and first responders, will be considered first in line to be vaccinated against the disease. However, things can get complicated as there is no direct answer as to who should be vaccinated first.

are considered as the first to start receiving the vaccine doses in the country.