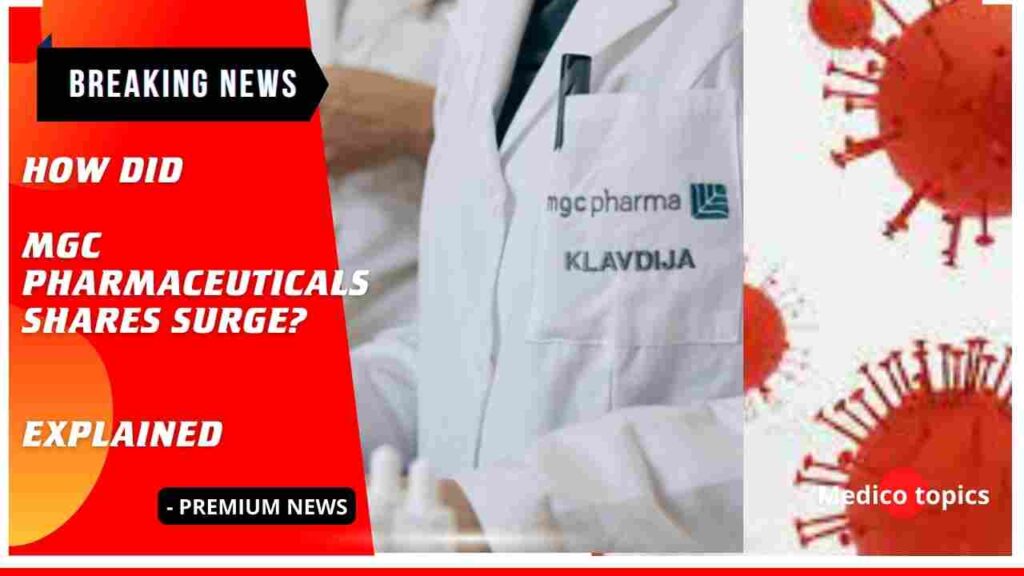 The founders of the MGC Pharmaceuticals Ltd company were prominent actors in the global medical cannabis market.

And the company’s major business plan is to create and sell high-quality medications derived from phytocannabinoids to meet the rising demand in the medical markets in Europe, North America, and Australia.

MGC Pharma has a strong product line that targets the two common medical illnesses epilepsy and dementia, and it also has more medications in the works.

Following the announcement that the company has increased its sales base, investors are driving up the share price of MGC Pharmaceuticals.

As a result, ArtemiC Rescue can be imported, distributed, marketed, and sold in India, providing the business with a new source of income.

Before this, a tiny trial batch had been shipped to its local partner, Carino Water Solutions & Energy, for proof of concept.

The sample received a license from the Food Safety and Standards Authority of India after clearing all necessary regulatory barriers.

Additionally, it satisfied the import restrictions of Indian Customs, which allowed ArtemiC Rescue to be sold all over India.

Given that India has the second-largest population in the world, receiving approval for the Indian market is a major accomplishment.

It has been clinically proven that ArtemiC Rescue helps COVID-19 patients with their mild to moderate symptoms.

The approvals, according to MGC Pharma, mark a significant advancement on the road to ArtemiC Rescue’s international sales.

Additionally, the business claimed that CimetrA, a therapeutic investigational medication, is developing over time.

Under India as well as other national regulatory and medical organizations, an application for Emergency Use Authorization is now in progress.

This includes requesting permission from the Food and Drug Administration (FDA) of the United States to treat patients there.

How did MGC shares surge?

Shares of MGC Pharmaceuticals increased after preliminary findings suggest widespread use of CimetrA as anti-inflammatory therapy.

Results suggest that CimetrA may be used for purposes other than treating COVID-19 symptoms, which has been the main goal of clinical trials up to this point.

According to the company, the study’s objectives include identifying the active component dosage concentrations.

The investigational medicinal product CimetrA has been given a patent by the Slovenian Intellectual Property Office, the business MGC Pharmaceuticals Ltd., listed on the London Stock Exchange, announced on Thursday.

CimetrA is a medication used to treat a variety of conditions, such as inflammation brought on by the flu, viral illnesses like Covid-19, and unfavorable side effects from various cancer treatments.

As a result of modulating the production of pro-inflammatory cytokines, CimetrA has a broad range of applications as anti-inflammatory medication, according to early findings from
a pre-clinical in-vitro study provided to MGC.

The study’s findings suggest that CimetrA may be used for purposes other than treating COVID-19 symptoms.

It was the main goal of current clinical trials and is still being advanced.

CimetrA is being advanced as a proprietary Research Medicinal Product by the biopharmaceutical firm with European headquarters.

They are popular in the development and production of phytomedicines (IMP).

According to the study, CimetrA modifies the transcription factors and gene expression of pro-inflammatory cytokines to control the body’s production of these molecules.

In particular, this study has shown that suppressing the pro-inflammatory cytokine IL-32, which was linked to rheumatoid arthritis, inflammatory bowel disease, asthma, psoriasis, and chronic obstructive pulmonary disease, can be done effectively.

Roby Zomer, managing director of pharmaceuticals at MGC and a co-founder of the company, said: “We have long had faith in CimetrA, and our most recent study on its mechanism of action indicates even more potential applications for the medication.

“This is a significant advancement because more conditions may now be managed by medicine. The fact that these most recent results support the findings of earlier studies is extremely heartening.

Its anti-inflammatory profile suggests that it potentially alters the lives of thousands of patients.

MGC is currently designing the subsequent stage of CimetrA’s clinical pathway in light of these findings and will keep everyone informed. Shares have increased to A$0.019 intraday, up as much as 11.9 percent.

Why did Kardashian and Thompson have baby via surrogacy?

Why did Mark Fleischman committed suicide? Cause of death

0
Reply
Who is Colin Murray? Know more about the host of Countdown show.