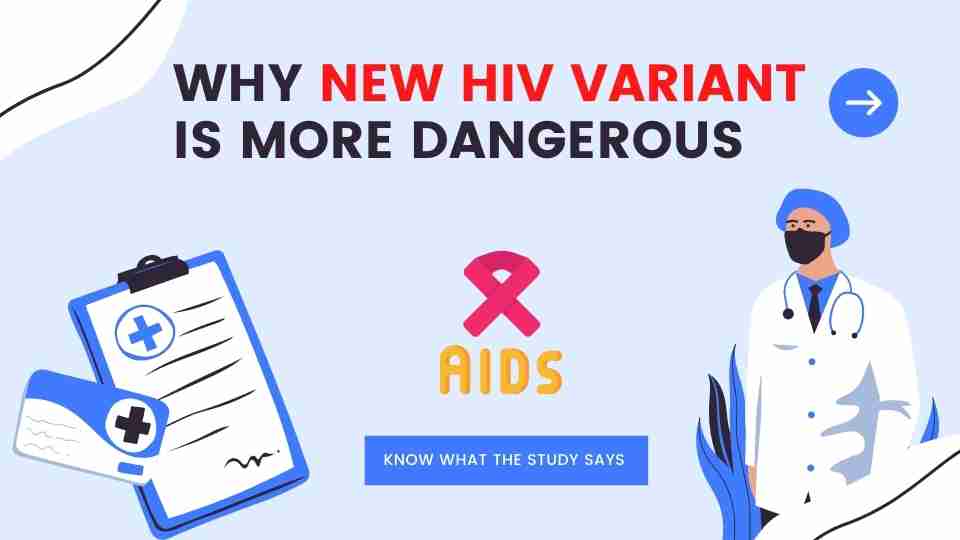 In the Netherlands, a new HIV variant has been detected. The VB variant strain appears to cause more serious illness more quickly. This strain was also associated with a greater viral burden.

The COVID-19 pandemic demonstrated that viral mutations may drastically alter a pathogen’s infectiousness and severity of the disease.

A new study from the University of Oxford has discovered a new variant of HIV, the AIDS-causing virus, that is possibly more infectious and might have a more significant impact on the immune system.

The variant has been found in 109 people so far, the majority of whom live in the Netherlands.

How much is the new strain is dangerous to the population?

The new HIV strain produces disease twice as quickly as the previous one.

According to experts, the new strain, known as the VB variant, damages the immune system, decreasing people’s capacity to fight common infections and diseases far faster than earlier HIV strains.

It also indicates that persons infected with the new type are more likely to get AIDS sooner.

Researchers discovered that VB has a viral load (the quantity of virus identified in the blood) that is 3.5 to 5.5 times more than the present strain, suggesting that it is potentially more infectious.

Damage to the immune system happened twice as quickly

According to the researchers, CD4+T cell loss (an indication of HIV-related immunological destruction) was twice as fast in persons with the variant.

“These patients were prone to contracting AIDS within 2 to 3 years by the time they were diagnosed,” the research authors concluded.

Critically low CD4 cell counts “with long-term clinical consequences” are predicted to occur 9 months after diagnosis in patients in their 30s with the VB variant if they do not receive therapy, they added.

“The potential of the VB variant to enhance transmission, impair the immune system, and stop therapy is a reminder of how clever the virus is becoming over time,” said Anthony J. Santella, Ph.D., MCHES, professor of Health Administration and Policy at the University of New Haven.

HIV testing is an essential tool

When asked what the variant implies in terms of testing recommendations for at-risk groups, William A. Haseltine, Ph.D., head, and president of ACCESS Health International, replied it depended on people’s behavior.

Haseltine, who has written many books, including Variants: The Shape-Shifting Challenge of COVID-19, stated, “I found early in the course of AIDS, human behavior is a lot more changeable than I imagined.”

It depends on your behavior and how many different partners you have, he added, adding that persons with several relationships should be tested more frequently.

Former FDA deputy commissioner Peter Pitts, head of the Center for Medicine in the Public Interest, believes VB isn’t a cause for concern.

He stated, “I believe it is a cause for renewed focus.” “We’ve been able to transform HIV/AIDS from a lethal to a chronic condition.”

He went on to say, “The struggle against viruses is a never-ending battle.” “From a public health standpoint, I believe we should focus on preventative treatment.”

Pitts went on to say that one of COVID-19’s takeaways is that testing is an “underappreciated weapon against viruses,” and that it should serve as a reminder that by testing more frequently, we can build better, more complex, and less expensive tests.

Last but not least

A novel HIV variant known as VB has been found by researchers. Compared to contemporary HIV strains, this variation is more infectious and transmissible.

Experts believe there’s no need to be concerned about VB because current therapies are still effective.

They also claim that using a condom or other barrier device during intercourse and taking PrEP medicine are the best ways to avoid catching or transmitting the virus.

0 0 votes
Article Rating
Subscribe
2 Comments
Oldest
Newest Most Voted
Inline Feedbacks
View all comments
How did Indian singer Lata Mangeshkar die? How did she become the Melody Queen and Nightingale of India?

[…] Why New HIV Variant is more dangerous than last one in causing AIDS? […]

0
Reply
Why Is It Important To Be A Sigma Male? 10 Sigma Male Quotes

[…] Why New HIV Variant is more dangerous than last one in causing AIDS? […]