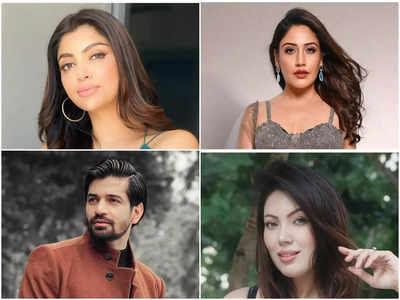 In Bigg Boss 15, 4 bigboss new members are coming to increase the problems of the family, know who are involved

Four outsiders have been sent inside the house to assess the performance of the ‘Bigg Boss 15’ contestants. These challengers will assign various types of tasks to family members, increasing their difficulties. Let us inform you that ‘Bigg Boss 15’ is nearing its conclusion. As a result, the producers are bringing in four celebrities (Bigboss new members) to test the level of the show’s contestants.

Mumbai:The game is becoming more challenging for the contestants as the ‘Bigg Boss 15 challengers’ entry approaches the climax. To add to the family’s anguish, the show’s producers have decided to let in four superstars from the entertainment sector. These four celebrities will appear on the show as challengers, who will put the competitors to the test by assigning them various tasks.

Apart from Munmun Dutta of ‘Taarak Mehta Ka Ooltah Chashmah’ in ‘Bigg Boss 15’, viewers will see TV actress Surbhi Chandna, Vishal Singh, Akanksha Puri as challengers. These four celebs will increase the problems of the family members. According to the Times of India report, the Challengers will be kept in different parts of the house. They will do the task, which the contestants will have to repeat.

Challengers will spend only 1 day in ‘Bigg Boss 15‘

All challengers will spend only one day in ‘Bigg Boss’ house. According to media reports, the four challengers are entering the house on Saturday. For a long time there were discussions about Akanksha Puri’s entry in ‘Bigg Boss’. She has been Paras Chhabra’s girlfriend. Fans will not be able to see him as a contestant, but as a challenger.