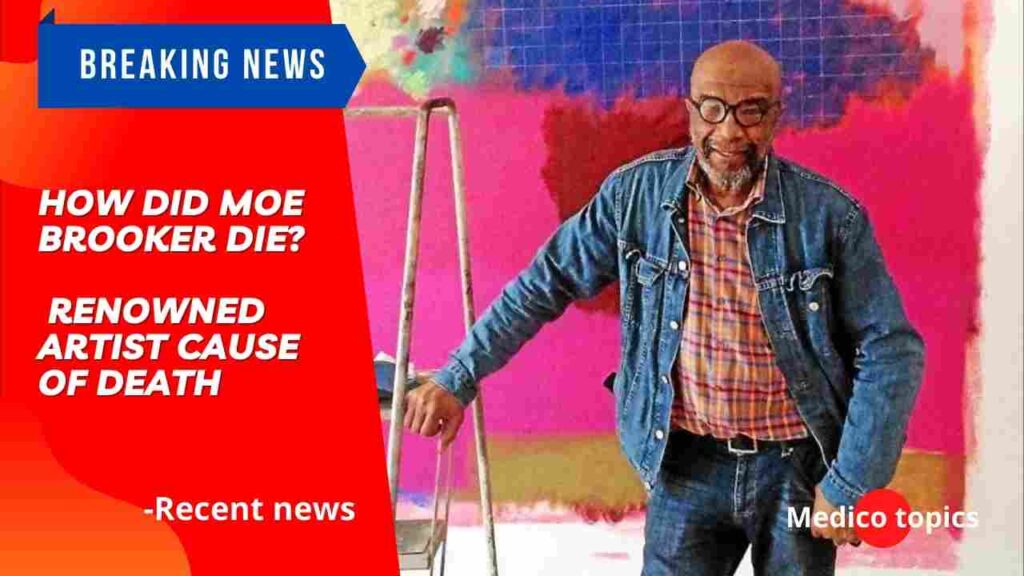 How did Moe Brooker die: Moe A. Brooker, an internationally recognized abstract artist and prominent member of the Philadelphia art community, died on Sunday, January 9, 2022, at Mercy Fitzgerald Hospital following a brief hospital stay. He was 81 years old.

Brooker was born on September 24, 1940, in New York City, to Rev. M.H. Brooker and Lumisher Campbell Brooker. He was the seventh child in a family of seven. He grew up in South Philadelphia, where he shared a home with all seven of his siblings and their parents, as well as his maternal grandmother. Love and devotion to family played an important role in his life and development as an artist.

Brooker attended public schools in Philadelphia and earned a certificate in painting from the Pennsylvania Academy of the Fine Arts in 1963. Tyler School of the Arts at Temple University awarded him a bachelor’s degree in fine arts in 1970.

Brooker joined the Tyler faculty after receiving his master’s degree in fine arts in 1972, launching a long and influential career as a fine arts educator.

Moe Brooker was hired as an assistant professor at the University of Virginia, Charlottesville, in 1974. The following year, he was invited to become an associate professor at the University of North Carolina. From 1976 to 1985, Brooker taught painting and drawing at The Cleveland Institute of Art. In 1985, he returned to his alma mater, the Pennsylvania Academy of the Fine Arts, to teach. Brooker was a faculty member at PAFA when he was invited to teach at the Tianjin Academy of Fine Arts in Tianjin, People’s Republic of China, during the fall semester of 1987.

In 1990, he accepted the position of chair of the Foundation Department at New York City’s Parsons School of Design. In 1995, he returned to Philadelphia to teach once more, this time at Moore College of Art and Design, where he served as chair of the Foundation Department for several years and was awarded the first Penny & Bob Fox Distinguished Professorship in 2011. He retired from full-time teaching in 2012 and was named professor emeritus at Moore. Brooker was a teacher with whom students stayed in touch for years after they graduated.

As an artist, Brooker was a staunch supporter of abstraction as a viable representational language. He created lyrical and poetic compositions using an alphabet of forms made up of brightly coloured and patterned planes, lines, patches, and texture. His forms are inspired by the sounds, arrangements, and shapes of jazz music, while also evoking the spontaneity of graffiti.

Brooker, according to Richard Watson, exhibitions manager and artist in residence at the African American Museum in Philadelphia, was part of a tight-knit group of Black artists in Philadelphia, including Barbara Bullock, Joseph Bailey, James Gadson, and John Simpson.

“I think Moe broke away from the pack of us who were about visualizing and commenting through our art on more immediate social and ethnic situations,” said Watson, who met Brooker when he first arrived at PAFA in 1964.

“When we first started talking about Black arts in Philadelphia, Moe was a step ahead of us in not secularising his art to reflect any different kind of the ethnic point of view.”

“Moe came from a more organic spiritual foundation that embraced his academic exposure to investigating and broadening his horizons for his craft,” Watson explained. “He was very focused on technique.” I would say that the research he put into how he articulated his artistic language was the most important because sometimes we get into a rank-and-file way of expressing our emotions of the time and we negate or overlook the rudiments of what an artist’s persona can be about.”

“Moe’s work style was unique,” Watson explained. “People wouldn’t understand Moe’s style because it was abstract work.” There is a formula for abstract art that is very silently, intellectually based on the theory of associations and relationships of shapes and colors that arise as one uses and experiments with them and begins to develop similarities and dissimilarities toward what they are attempting to express.”

Brooker had a long history of solo and group exhibitions in the United States and around the world, including 36 one-person shows. In 1980, he had his first New York exhibition at the Ruth Siegel Gallery. He was represented by the June Kelly Gallery in New York City and the Sande Webster Gallery in Philadelphia for over 20 years. The Stanek Gallery was his most recent gallery representation.

The Philadelphia Museum of Art, The Cleveland Museum of Art, Musee des beaux-arts du Canada, The Studio Museum of Harlem, The Woodmere Museum, The Kimmel Center for the Performing Arts, General Motors Corporation executive offices, The Montgomery Museum of Fine Art, The Museum of American Art of the Pennsylvania Academy of the Fine Arts, The Lauren Rogers Museum of Art, The Wharton School of T

Brooker gave back to the community by teaching classes at Main Line Art Center, where he also served on the advisory board, by participating in the Senior Art Project at the University of Pennsylvania, and by serving on the Philadelphia Art Commission, which he chaired from 2006 to 2012.

Brooker has received numerous honors and awards, including the 2014 Philadelphia Sketch Club Medal, the 2011 Legacy Award from the African American Museum in Philadelphia, the 2010 Hazlett Memorial Award for Artist of the Year in the State of Pennsylvania, the 2010 Philadelphia Artist Equity Award, the 2009 Philadelphia Art Alliance’s Medal of Achievement, the 2004 Conrad Nelson Fellowship-the University of Millersville, and the 2003 James Van Der Zee Lifetime Achievement Award.

He was commissioned to create an “Absolute Brooker” advertisement for Absolut Vodka in 1992, and he was awarded the Cleveland Arts Prize for Visual Arts in 1985. He was most recently inducted into the Historic Germantown Hall of Fame in 2021.

In a tribute, his family said, “A man of deep faith, Moe Brooker was passionate about art, music, and life.” “He defined what it meant to be a professional fine artist, a caring professor, a devoted son, brother, husband, father, colleague, and friend.”

How did Moe Brooker die?

Moe Brooker’s death cause: Moe Albert Brooker, a beloved Germantown resident and one of Philadelphia’s most renowned artists, died on January 9 after a brief stay at Mercy Fitzgerald Hospital. He was 81 years old.

Brooker had an international reputation despite his gentle and modest demeanor. His paintings can be found in the collections of dozens of major museums, including the Philadelphia Museum of Art, the Woodmere Art Museum, the Cleveland Museum of Art, the Pennsylvania Academy of the Fine Arts, Moore College of Art & Design, the Kimmel Center for the Performing Arts, and many others.

Brooker previously married Virginia Robinson Brooker and then Cheryl McClenney Brooker, both of whom died in 2019.

Public memorial service is being planned.

[…] How did Moe Brooker die? Renowned Artist cause of death […]