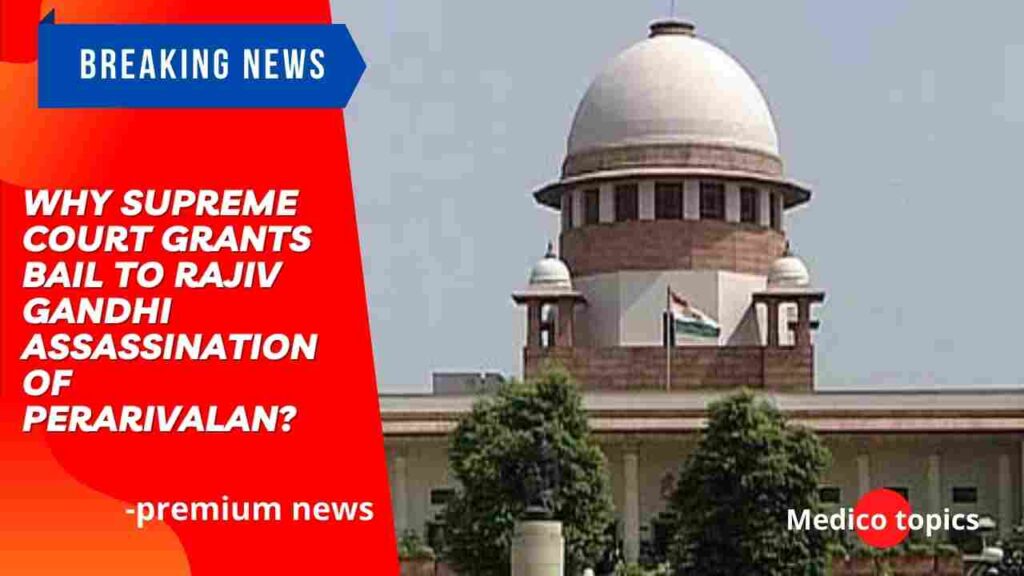 The Supreme Court grants bail to a convict in the assassination of former Prime Minister Rajiv Gandhi.

The Supreme Court granted bail to AG Perarivalan, a convict in the assassination of former Prime Minister Rajiv Gandhi, on Wednesday. According to the Court, he was imprisoned for 32 years and is currently on parole. However, the Supreme Court stated that Perarivalan’s movement is restricted under parole, and he must report to the local police every month.

In its order granting him bail, the court stated: “Since Perarivalan has already served his sentence for more than 30 years, we are of the considered opinion that he is entitled to bail in spite of the vehement opposition by the Additional Solicitor General.”

“Since he has already served his sentence for more than 30 years, we are of the considered opinion that he is entitled to bail, despite the vehement opposition of Additional Solicitor General K M Nataraj,” said a bench presided over by Justice L Nageswara Rao.

The bench, which also included Justice B R Gavai, noted that there is no dispute about Perarivalan having served 32 years in prison and that the court was informed he had been released on parole twice previously with no complaints.

Perarivalan had stated that the Governor had yet to rule on his request for remission, and that the delay was a basis for bail.

In response to his petition, the Centre stated that the President was the proper authority to decide Perarivalan’s request. “In the case of offences to which the Union’s executive power extends, it is the Centre’s right to decide on a plea for release,” it said. It also argued that Perarivalan had already reaped the benefit of a death sentence reduction to life imprisonment by citing a delay in deciding his mercy plea, and that he could not reap the benefit again by citing another delay.

The Supreme Court stated, “In view of the Union of India’s stand that the state government does not have the power to entertain the application, especially after the death sentence imposed on has been reduced to life, the matter will have to be decided finally.” It went on to say that “enough material has been produced by the applicant to prove his conduct during the long incarceration, degree acquisition, and ill health.”

Perarivalan, who was arrested in the case at the age of 19, was sentenced to death in May 1999. He was charged with purchasing the 8-volt battery used to detonate the belt bomb that killed former Prime Minister Rajiv Gandhi. During the lengthy pendency of their mercy petitions, his sentence and that of two others, Murugan and Santhan (both Sri Lankans), were commuted to life in prison in 2014. Soon after, the AIADMK government in Tamil Nadu ordered the release of all seven of the case’s convicts.

While the Governor did not consider Perarivalan’s pardon request in 2015, a Supreme Court order on a related petition in September 2018 clarified that the Governor was “deemed fit” to decide on the pardon. The AIADMK government recommended that all seven convicts be released within three days.