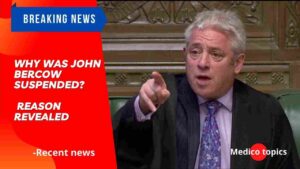 Why was John Bercow Suspended: Former Speaker John Bercow has been administratively suspended from Labour after a bullying investigation finds him guilty and bans him from parliament.

Sky News understands that former Commons Speaker John Bercow has been administratively suspended from the Labour Party pending an investigation.

Earlier today, the standards watchdog found Mr Bercow guilty of bullying House of Commons staff and barred him from holding a pass allowing him access to parliament buildings for the rest of his life.

According to the Independent Expert Panel’s report on the former Commons speaker’s behaviour, Mr Bercow “has been a serial liar” and “a serial bully.”

It goes on to say that his behaviour “fell far short of what the public has a right to expect from any member of parliament,” and that if he was still a sitting MP, it would have been recommended that “he be expelled by resolution of the House.”

“As things stand, we recommend that he never be granted access to the parliamentary estate,” the report concludes.

Mr Bercow, a former Conservative MP, stepped down as Speaker in 2019 after a decade in the role, and he controversially defected to the Labour Party last year.

He has repeatedly denied the allegations levelled against him, claiming previously, “I have never bullied anyone, anywhere, at any time, in any way.”

Speaking to Sky News after the Independent Expert Panel’s findings were released, Mr Bercow accused the panel of using “hyperbolic” language “in pursuit of headlines in a very cluttered media environment.”

“I acknowledge that they have the right to make a decision, but I am not obligated to accept that decision. It isn’t, and I don’t think it is “said the former speaker.

“As far as I am concerned, I have told the truth from the beginning to the end of the investigation.”

Mr Bercow told Sky News that “huge swaths of evidence” were ignored by the “so-called Independent Expert Panel,” and that “hearsay was preferred over testimonies of people present at the time.”

When asked if he would issue an apology in the aftermath of the report, he said, “I don’t believe in phoney apologies.”

Mr Bercow called the investigation into allegations that he acted inappropriately toward staff during his time as Commons speaker “a protracted, amateurish, and unjust process” in a statement released at the same time as the panel’s findings were released.

The former speaker calls the report a “travesty of justice,” adding, “This has been a protracted, amateurish, and unjust process that would not have survived five minutes of scrutiny in court.”

“To refer to what I’ve gone through as a kangaroo court is grossly insulting to kangaroos.” None of the investigators is lawyers, and the commissioner in charge of them has no experience with allegations of bullying.”

Bercow has been accused of ‘abuse of power.’

The findings of the Parliamentary Commissioner for Standards Kathryn Stone were upheld by the Independent Expert Panel, which determines sanctions in cases where bullying complaints have been lodged against MPs.

The parliamentary standards commissioner upheld 21 allegations against Mr Bercow from three complainants spanning the years 2009 to 2014.

Mr Bercow’s appeals over bullying against three people – Lord Lisvane, the former Commons clerk, Angus Sinclair, and Kate Emms – were rejected, and he was accused of “abuse of power.”

According to the Independent Expert Panel, the bullying and harassment policy was “violated repeatedly and extensively by the most senior member of the House of Commons.”

Bercow is the first speaker in over 200 years to be denied peerage.

“It is for historians to judge whether the respondent was a successful reforming speaker of the House of Commons,” the report continued.

“However, there was no need to act like a bully to accomplish that goal.” A great office can be filled with force and effectiveness without resorting to such behaviour.”

Mr Bercow was the longest-serving speaker since Edward FitzRoy, who held the position for nearly 15 years between 1928 and 1943.

He presided over numerous Brexit squabbles in the Commons and, upon his departure, became the first speaker in over 200 years to be denied a peerage.

Former Labour leader Jeremy Corbyn then nominated Mr Bercow for a peerage, which was denied due to the ongoing investigation into alleged wrongdoing.

The complainant describes a ‘consistently upsetting’ time in her career.

Ms Stone said in a statement, “I am grateful to the Independent Expert Panel for their detailed and considered report regarding Mr Bercow’s conduct.”

“Their report upholding my findings demonstrates my ongoing commitment to ensuring that the investigations under my supervision, and the decisions I make, as a result, are independent, impartial, thorough, and fair.”

Ms Emms, one of the complainants, stated that she was “extremely glad to be vindicated by the report.”

“The effects of the only truly horrible, undermining, and consistently upsetting period of my career have spread into all areas of my life,” she explained.

“Stress, anxiety, and a lack of confidence sent me home on sick leave, affecting how I saw myself and how I felt I was perceived by family, friends, and colleagues.”

Downing Street hopes that Mr Bercow’s conviction for bullying staff will encourage others at Westminster who is subjected to harassment to come forward.