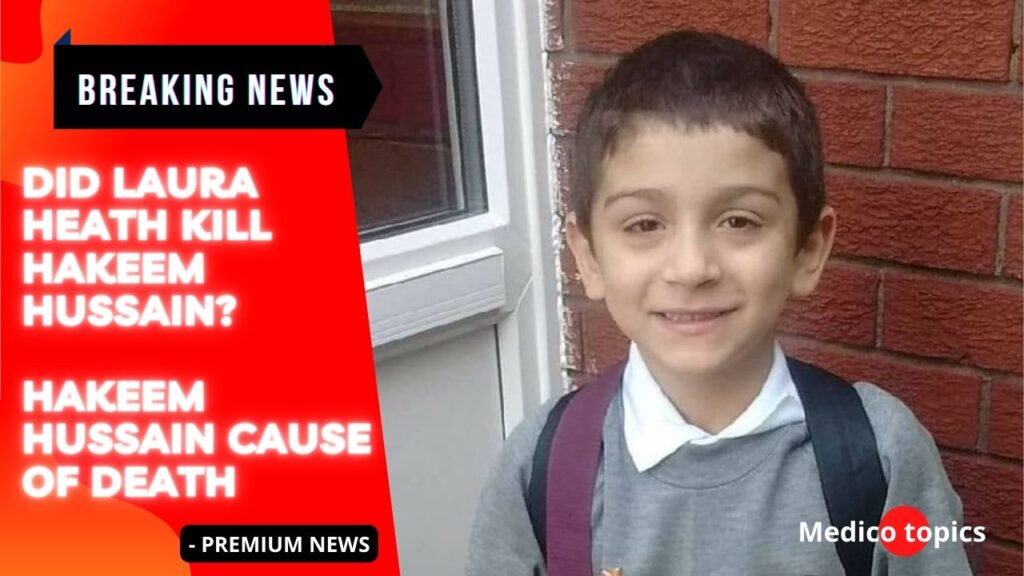 The mother of a boy discovered dead in a chilly garden after an asthma attack has been sentenced to 20 years in prison. Let’s see how did Laura Heath kill Hakeem Hussain.

What really happened that night?

In November 2017, seven-year-old Hakeem Hussain was discovered dead at his home in Birmingham.

Laura Heath, the court heard, had prioritized her drug and alcohol addiction over caring for him.

At Coventry Crown Court, the 40-year-old was found guilty of manslaughter by gross negligence and admitted four counts of child cruelty.

Hakeem, who was known to authorities, died alone and “gasping for breath” in the garden of the property where his mother was staying, according to the trial.

Her drug addiction had worsened in the months leading up to his death, to the point where she was spending £55 per day on heroin and crack cocaine, which she paid for in part through sex work.

The jury was also informed that she had repurposed one of his inhalers as a crack pipe.

Heath had smoked heroin the night Hakeem died before passing out on the same mattress as him.

Hakeem had an asthma attack during the night, which was most likely exacerbated by the impacts of second-hand smoke.

Unable to wake his mother, it is believed he went outside for fresh air, where he was discovered the following morning.

Hakeem Hussain Cause of death

Mr. Justice Dove, in sentencing Heath, stated that Hakeem’s death was a result of Heath’s “catastrophic and deplorable” parenting.

Did Laura Heath kill Hakeem Hussain, Hakeem died as her life “entered a drug-fueled downward spiral into squalor, chaos, and tragedy,” according to the coroner.

“It is clear that [Hakeem] had been a motivation of happiness and affection for people who knew him in his tragically short life,” Mr. Justice Dove said.

“All of that potential for a marvelous and fulfilling life was snuffed out when he collapsed on his own, suffocating, clutching a leaf in the garden.”

“The truth is that Hakeem died as a result of your heinous carelessness.”

His death was “unnecessary, tragic, and the result of your absolute failure as his mother,” according to the judge.

What happened to Hakeem Hussain?

Did Laura Heath kill Hakeem Hussain, Hakeem died of uncontrolled asthma, according to a post-mortem examination, and toxicology evidence showed he had breathed tobacco smoke in the hours before his death.

A hair sample revealed that he had also consumed heroin, crack cocaine, and cannabis.

Hakeem had been struggling with breathing difficulties and asthma since he was three years old, and authorities had been concerned about his medical condition and how it was being mismanaged at home throughout his life, according to the court.

He had not had access to his preventative inhaler for two days before his death because it had been left uncollected by his mother at his home on nearby Long Acre.

Just two days before his body was discovered, a nurse at his school told a safeguarding panel that if nothing was done, he would die “by the weekend.”

The court heard that on the Friday before his death, health, education, and social services voted to act to protect Hakeem and that a conversation with Heath was scheduled for the following Monday.

Laura Heath was found guilty of gross negligence manslaughter in the death of her 7-year-old son Hakeem Hussain.

A mother was sentenced to 20 years in prison for fatally neglecting her asthmatic son, who died alone and “gasping for air” in a garden.

Laura Heath, a drug addict, was sentenced at Coventry Crown Court after being found guilty of gross negligence manslaughter in the death of her son Hakeem Hussain, who died in a freezing garden following an asthma attack.

Hakeem was known to social services, and a serious case review is established to be published in the coming weeks.

Just two days before his death, a nurse told a child protection meeting that Hakeem “could die at the weekend.”

According to the trust, there were “clear missed opportunities” by social workers in Hakeem’s case.

Andy Couldrick, the company’s CEO, stated that Hakeem “was saying some things to people that we should all have heard, listened to, and acted on more quickly and with greater urgency.”

Over the next few months, a serious case review examining the circumstances of his death will be published.

Hakeem’s safety was rated as a ‘zero out of ten.’

Heath’s level of drug addiction amounted to a recognized mental condition, according to defense QC Isabella Forshall before sentencing.

Heath began using heroin in her adolescence, was in treatment by 2002, and was a diagnosed and enrolled heroin addict at the time of Hakeem’s death.

Before the trial, Heath admitted to four counts of child cruelty, including failing to provide proper medical monitoring and exposing Hakeem to class A drugs.

A school nurse told a child protection conference on November 24, 2017, just two days before his fatal collapse, that “he could die at the weekend.”

Hakeem’s safety was rated “zero” out of ten by Nurse Melanie Richards and a family outreach worker at Hakeem’s Nechells Primary School, both of whom were present at the meeting.

“There were no safety or protective factors, and Hakeem was at significant risk of harm,” said Neelam Ahmed, the school’s family outreach lead.

A thorough investigation into all agencies’ interactions with the child and his mother prior to his death is expected to be completed within the next few weeks.

However, following the trial, the head of Birmingham Children’s Trust, which took over child social care in early 2018, stated that there were “clearly missed opportunities” in the case’s handling by social services.

“Suffering from severe asthma meant Hakeem Hussain needed an observant and loving parent who was always alert to his wellbeing,” an NSPCC spokesperson said.

“Unfortunately, he was completely neglected by his mother as she lost herself in the use of heroin and crack cocaine.”

“It appears that local agencies missed opportunities to intervene and protect Hakeem, with the full details to be revealed when the Child Security and safety Practice Review is published in the coming weeks.”

Heath had lived at Long Acre since 2013, with one visitor describing the conditions as “disgusting.”

The same witness stated that Hakeem claimed he didn’t have a bed and slept on the sofa, while there was proof Heath used an upstairs bedroom for sex work to fund her habit, with a condom basket next to the mattress.

Heath recently moved in with a friend, Timothy Busk, who lived in a flat in Cook Street, a short walk away, which one friend described as “foggy and smoky” inside and a “mess.”

Heath later told police that she smoked three bags of heroin that night, two before Hakeem went to bed at 10.30 p.m. and one afterward, leaving her in a drug-induced coma.

Mr Busk woke Heath up at 7.37 a.m. on Sunday, November 26th, after discovering Hakeem dead in the garden and carrying the youngster’s gaunt body to the sofa.

She dialled 911 and later told police, “Hakeem was freezing and his lips were blue.”

“Hakeem would go out when he was sick and must have dozed off” (when outside).

“I just think he didn’t wake me up, went outside to get some fresh air, and then probably fell asleep.”

A neighbor had heard tapping at his window in the early hours, but when he went downstairs to investigate, he saw nothing in the darkness.

Jurors were told that Hakeem’s father, who was present for much of the trial, was in prison at the time of the boy’s death for an unrelated crime.