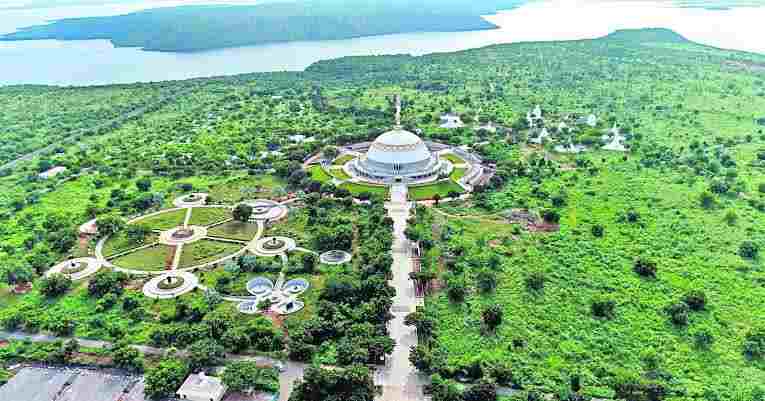 Few people realise that Buddhism was founded in Telangana during Gautam Buddha’s lifetime, before spreading to South India and subsequently across South Asia. A modest beginning has been made in the shape of the ‘Buddhavanam’ project in Nagarjunasagar on the banks of the Krishna in an attempt to resurrect this previous splendour and convert Telangana into a worldwide tourism destination.

The Buddhavanam project, which will be inaugurated by Chief Minister K Chandrashekhar Rao soon, was funded with Rs 65 crore and spans 274.28 acres on the Krishna River’s banks. The project, which is in the process of becoming a worldwide tourism attraction, is an attempt to capture Telangana’s Buddhist past and interpret it for the current generation.

Around 170 acres of land around the Stupa’s core has already been set aside for Buddhist institutions such as colleges, monasteries, Buddhist training centres, meditation retreats, and other international institutions. Buddhist organisations from Sri Lanka and Tibet have taken property for monasteries, retreats, and Buddhist cultural centres, while Vipassana International has already begun its meditation centre.

We’ve already begun discussions with institutions in three Southeast Asian countries about creating educational and spiritual centres. We are expecting to execute deals with them shortly after the project’s launch. Several foreign institutions have already showed interest in collaborating with the government on this,” Mallepalli Laxmaiah, special officer for the Buddhavanam project, told Telangana Today.

The Buddhavanam project (then known as Sriparvata Aarama project) was started during the regime of erstwhile Andhra Pradesh in 2001 and was neglected by successive governments until Chief Minister K Chandrashekhar Rao discovered the historical, cultural, and religious significance of the project site while participating in the 2559th Buddha Jayanti celebrations in 2015. He had established the Buddhavanam project as a special purpose entity and had promptly sanctioned Rs 25 crore. This project has cost around Rs 65 crore so far.

In the project’s centre, a 21-meter-high hollow Maha Stupa with a 24-meter radius is being built to commemorate the ancient Amaravati/Sriparvata Stupas. The Stupa is adorned with sculptures illustrating Buddha’s life and ministry, providing visitors a clear picture of what ancient stupas looked like.A large brass-coated mandapam sits beneath the dome of Maha Stupa, with eight sculptures of Buddha in five poses facing eight directions.

The project’s central space is divided into eight segments to commemorate the Buddha’s eight-fold road (Astangamarga), with each component honouring a different facet of Buddhist history. Five segments have been constructed so far: Buddhacharitavanam (important events in the Buddha’s life), Bodhisattva Park (Jataka Park), Dhyanavanam (meditation park), Stupa park (miniature stupas), and Mahastupa. A Buddhist museum, universities, and monasteries are among the other parts.

Below the Maha Stupa, a comprehensive Buddhist museum, as well as a gallery for Buddhist art and a tiny theatre for speeches and gatherings, is being built. 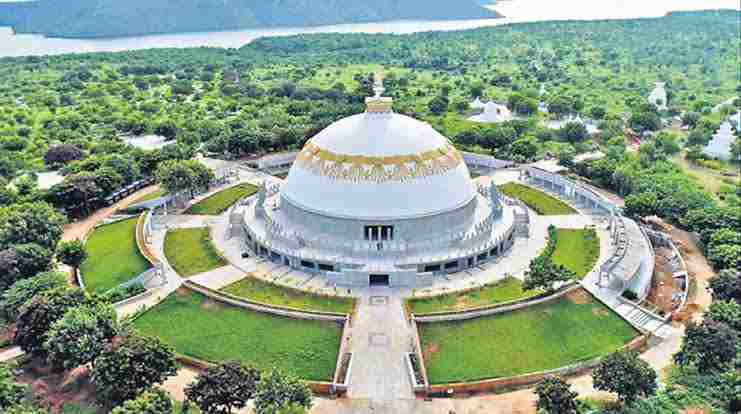 The Buddhist museum will be divided into numerous historic and cultural sections to showcase Buddhism in Telangana and other regions of the country. While certain sculptures and other items now housed at the State Archaeology Museum may be relocated to Buddhavanam, attempts are on to get a few more sculptures and artefacts that were found in Telangana but are currently housed at Nagarjuna Konda in Andhra Pradesh.

Another gem in the project is a Bodhi tree that was established by the Dalai Lama during the 30th Kalachakra initiation conducted in Nagarjuna Sagar in January 2006. Surprisingly, the plant sapling is a descendant of Gaya’s hallowed Bodhi tree, under which Buddha attained enlightenment.

A huge area of land along the Krishna River’s banks is also accessible for tourist recreational activities, including as water sports and amusement parks. “For the Buddhavanam project, we have big aspirations. In collaboration with the Andhra Pradesh government, we hope to convert Nagarjuna Sagar into a significant tourist attraction. I’ve already spoken with my Andhra Pradesh colleague about this, and we’ll be meeting shortly to devise a strategy. Following that, we would implement these projects after receiving consent from both the Telangana and Andhra Pradesh Chief Ministers,” said Tourism Minister V Srinivas Goud.