In Bhopal, a 4-year-old child was attacked and pulled by dogs, and she was taken to the hospital. Latest dog attack news today in Bhopal. 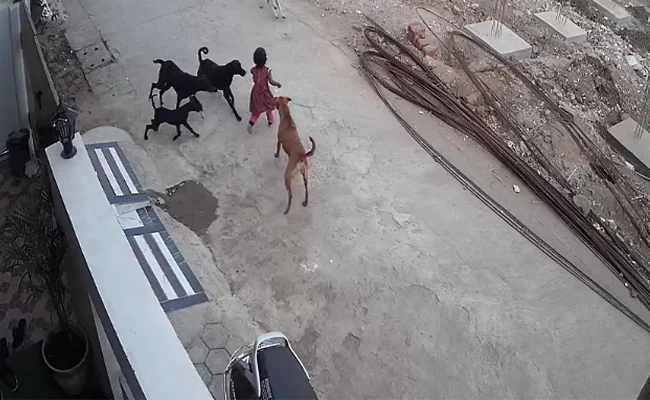 A four-year-old child was chased, pushed to the ground, and then bitten by a gang of dogs in a terrible video taken on CCTV in Madhya Pradesh’s capital Bhopal. Only after being scared away by a bystander did the stray dogs abandon the girl. The toddler was taken to the hospital with serious injuries. The youngster, a laborer’s daughter, was outside playing when she was attacked by the dogs.

The girl, the daughter of a labourer, was attacked by the pack while playing outside her house. As she attempted to flee, the dogs encircled her and bit her on the head, belly, and legs.

The dogs then dragged her to the ground and continued to assault her, according to footage captured by a CCTV camera in BagSewania, Bhopal.The attack lasted a few minutes until a bystander intervened and scared the dogs away.

In Bhopal, street dogs have become a problem.

In the Kohefiza neighbourhood last year, a seven-year-old child was bitten by stray dogs in the sight of her mother.

In 2019, a six-year-old kid was mauled to death in front of his mother by a pack of stray dogs. When the boy’s mother attempted to save him, she sustained serious injuries.

Bhopal, according to sources, has over a million stray dogs. Now a days, ‘dog attack news today’ is getting trend every day.

Horrific! Stray dogs mauled a 4 year old girl in Bhopal a passerby threw stones at the dogs and chased them away. The child has been hospitalized with severe injuries. pic.twitter.com/X4EyruZxra