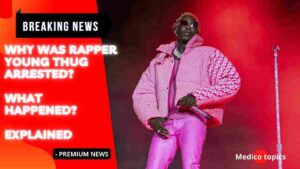 According to jail records, rapper Young Thug was one of 28 people arrested Monday in Georgia on counts of conspiracy to violate the state’s RICO legislation and street gang charges. Let us see why was Young Thug arrested, and what happened.

Why was Young Thug arrested?

Jeffrey Lamar Williams, an Atlanta rapper, was arrested at his residence in Buckhead, a district just north of downtown Atlanta. The Fulton County Jail is where he is being kept.

Young Thug, one of Atlanta’s most popular rappers, was arrested on charges of gang membership and conspiracy to violate Georgia’s criminal racketeering legislation on Monday. The rapper, whose actual name is Jeffery Williams, was named in a grand jury indictment that named him and 27 other persons as members of the same criminal street gang and accused some of them of heinous offenses such as murder and attempted armed robbery.

According to the indictment, Young Thug is one of three founders of the Young Slime Life, a “criminal street gang that began in late 2012” in Atlanta. According to the jail record, the conspiracy charge was filed in 2013 and the gang charge was filed in 2018. Officials claim that YSL is linked to the national Bloods gang. “Preserving, safeguarding, and enhancing the enterprise’s reputation, power, and territory by acts of criminal conduct, including murder, assault, and threats of violence,” according to the charges.

The indictment charged all 28 defendants with conspiring to violate the state’s Racketeer Influenced and Corrupt Organizations Act, or RICO. RICO is fashioned after the federal law most famously employed against organized crime figures. Ms. Willis was a key player in a highly publicized criminal case in which Atlanta public school teachers were accused of cheating on standardized tests. She has also suggested that Mr. Trump and some of his friends may have broken state RICO laws in their alleged attempt to sway the 2020 presidential election results.

“Mr. Williams committed no crime whatsoever,” Young Thug’s lawyer Brian Steel told local media, adding that he will “fight until his last drop of blood to clear him.”
He will appear in court for the first time on Tuesday at 11:30 a.m.
Sergio Kitchens was the real name of Gunna the Atlanta rapper. And wannabe rapper Christian Eppinger, who was already in jail, was also indicted on Monday for allegedly shooting an Atlanta police officer six times in February. Gunna, who is accused of conspiring to violate the state’s RICO laws, was not immediately available for comment.

Young Thug and Gunna posted bail for 30 low-level inmates who couldn’t afford it themselves in April 2021. YSL Records, or Young Stoner Life Records, is Young Thug’s record label. The company refers to its performers as “Slime Family,” and in April 2021, a compilation album called “Slime Language 2” debuted at No. 1 on the charts.

How did Midge Decter die? What happened? Cause of Death Revealed

How did Jody Lukoki die? What Happened? Cause of Death Revealed

0
Reply
How did Bob Lanier die? Cause of Death Explained