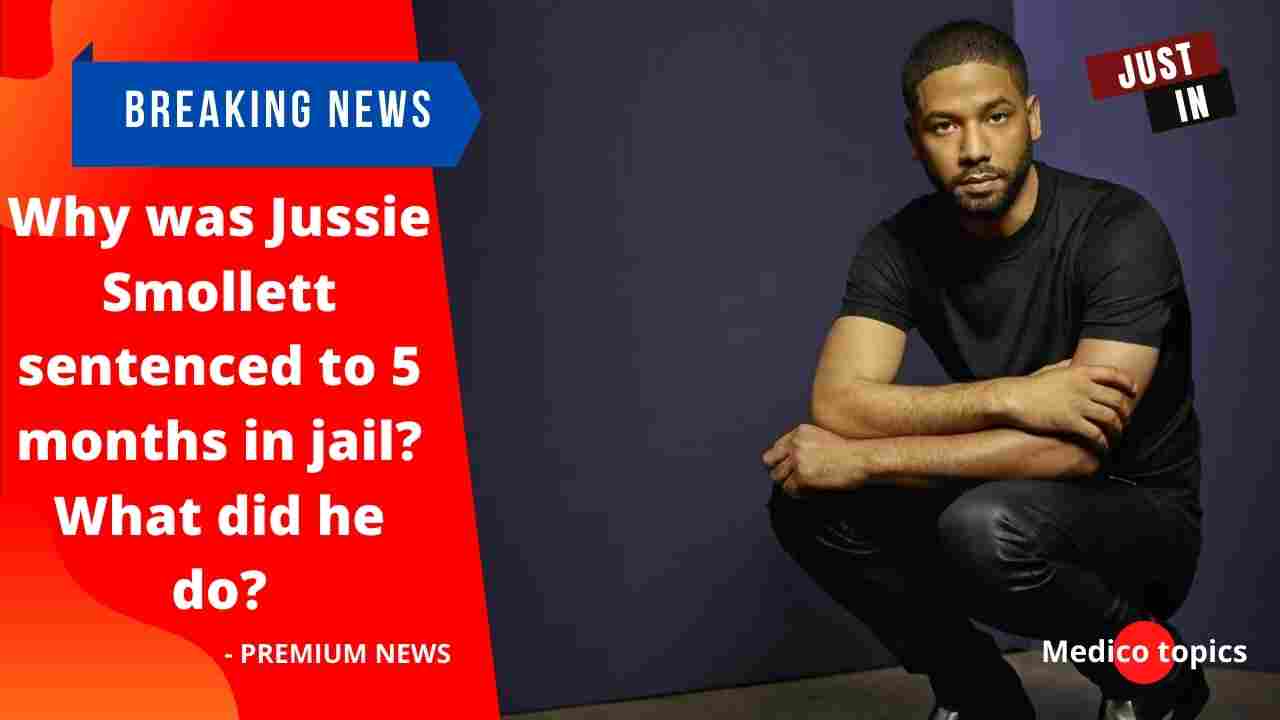 Washington [United States], March 11 (ANI): Jussie Smollett, best known for his role on the hit show ‘Empire,’ was sentenced to five months in prison on Thursday for staging a hate crime in which he told lies to authorities about being jumped by two men yelling racist and homophobic slurs at him.

According to Variety, the actor has been ordered to pay USD 120,000 in compensation to the city of Chicago, as well as a USD 25,000 fine. Smollett will also be sentenced to 30 months of probation.

Who is Jussie Smollett?

Jussie Smollett is a singer and actor from the United States. He was born on June 21, 1982. In 1991, he began his career as a child actor in films such as The Mighty Ducks (1992) and Rob Reiner’s North (1994). Smollett played musician Jamal Lyon in the Fox drama series Empire in 2015, a position that was hailed as groundbreaking for its positive portrayal of a black gay man on television. Smollett has also played Ricks in Ridley Scott’s science fiction film Alien: Covenant (2017) and Langston Hughes in Marshall (2017).

Why was Jussie Smollett sentenced?

For each of the five felony counts, Smollett confronted up to three years in prison. Judge James Linn stated that he will spend the first 150 days of his parole in the Cook County jail, beginning immediately. In addition to the maximum $25,000 fine, he must pay $120,106 in restitution to the city of Chicago.

A motion to reconsider Smollett’s sentence or to temporarily stay his custodial sentence while his counsel filed an appeal was also denied by the judge.

“The wheels turn slowly, but the hammer of justice must fall from time to time, and it is falling right now,” Linn said. “I’m not going to stay here.”

Linn spent a significant amount of time in court on Thursday mentioning the defendant, saying his case has received “unprecedented” attention, the kind he’s only seen for murder trials.

“Let me tell you, Mr. Smollett, there is nothing I can do here today that will come close to undoing the damage you’ve already done to your own life,” he said. “By your misbehavior and shenanigans, you’ve turned your life upside down, you’ve destroyed your life as you knew it, and there’s nothing any sentencing judge could do to you that could compare to the damage you’ve already caused yourself.”

“You’re just a charlatan pretending to be a victim of a hate crime, and that’s shameful,” the judge said at another point.

Linn also described Smollett as “profoundly arrogant, selfish, and narcissistic,” saying he had caused “real harm” to actual victims of hate crimes. He did, however, emphasize that his sentence was not chosen to appease public outrage, but rather was based on Smollett’s priors, testimony, and the response from social justice titans who spoke on Smollett’s behalf.

“You did know this was a nation that was slowly trying to heal historical injustices and current injustices and making a better future for each other,” he said. “And it was a hard road, and you ripped some scabs off some healing wounds for one reason: you hoped to create yourself more famous, and it worked for a while.”

Linn went on, “You were throwing a national pity party for yourself.” Smollett exited the courtroom with his fist raised in the air.

“I am not suicidal, and I am innocent,” Smollett said after at first refusing to speak during the imprisonment. “If I did this, it means I punched a hole in the fears of Black Americans in this nation for over 400 years, as well as the fears of the LGBT community. I respect you, Your Honor, and I respect the jury. But I didn’t do it, and I’m not suicidal — and if anything bad happens to me when I go in there, it’s not my fault. And you must all be aware of this. I honor you, your dignity, and your decision.”

On January 29, 2019, the Black and gay actor reported to Chicago police that he had been the victim of a homophobic and racist attack. He claimed two men followed him down a street late at night, yelling slurs before slapping him with an “unknown chemical substance” and tying a noose around his neck.

During the trial, however, police and prosecutors claimed that Smollett paid Abel and Ola Osundairo, brothers, $3,500 to stage the attack. Smollett allegedly asked the brothers to stage a fake attack, according to their testimony.

During Thursday’s sentencing, Smollett’s defense team asked for his conviction to be overturned or declared a mistrial, citing a previous Cook County prosecutor’s promise to drop his original charges in 2019. Tina Glandian, Smollett’s defense attorney, argued that the re-prosecution was a violation of Smollett’s rights and that several errors were made during the trial.

Prosecutors reacted angrily to the defense team’s claims, describing them as “finger-pointing and scapegoating.”

Linn denied the proposal for a new trial, stating that “the only crime involved in this entire situation was the false police report.”

The prosecution also read a victim impact statement from the Chicago Police Department, which asserted Smollett’s false report cost the department money and time that could have been used to solve crimes, and that it harmed “real” victims of hate crimes. Smollett was also ordered to pay $130,106 in restitution to the department for the cost of the investigation.

Smollett’s defense presented several key witnesses who testified about Smollett’s character as well as his impact as a role model and an actor in the African American community.

“He is a very loving and caring young man,” Rich Daniels, former “Empire” music director, said on the stand, explaining how Smollett gave back to the Chicago society, including visiting students in local schools. “I have nothing but admiration for him.”

Joel Smollett, Smollett’s older brother, also read a statement pleading for mercy on his brother’s behalf, saying, “Jussie Smollett should not be imprisoned. He has always been a kind, loving, and creative person. He poses no danger to the people of Illinois.”

Smollett’s 92-year-old grandma also spoke on his behalf, citing her Jewish heritage as one of the reasons Smollett and his family were so concerned with social justice. She addressed the judge directly, pleading with him to send her to jail alongside Smollett if he is imprisoned.

Following statements from his friends and brother, Smollett appeared to wipe away tears while sitting next to his counsel.

Smollett’s attorneys then read letters from Black Lives Matter, the Innocence Project, and Rainbow Push, as well as Rev. Jesse Jackson, actor Samuel L. Jackson, and actress Alfre Woodard. The letters referred to Smollett’s character and asked the judge to sentence him to probation rather than jail time.

Smollett categorically denied the allegations made by police and prosecutors that he staged the attack.

According to CBS Chicago, while on the stand, the 39-year-old actor claimed that the $3,500 the brothers claimed they were paid to stage the attack was a payment for several practice sessions and an illegal herbal supplement from Nigeria.

He told the jury, “There was no hoax.” “Not a single piece of info has changed.” Smollett’s defense team painted Ola Osundairo as homophobic, implying that the brothers were motivated to attack Smollett.

Smollett also testified that he and Abel Osundairo kissed in a public restroom. Abel rejected ever engaging in sexual activity with Smollett but told police that he agreed to assist the actor with the attack because he believed Smollett would help him advance in his acting career.

The prosecution emphasized police evidence, including a video of Smollett’s car picking up Abel days before the incident and driving to the location where the attack was reported. According to CBS Chicago, Smollett claimed that he and Abel frequently used drugs together, but police claimed that the meetup was a “dry run” for the attack.

Prosecutor Dan Webb also expressed doubts about Smollett’s testimony, claiming that he would not have left out to buy eggs at 2 a.m. on one of the chilliest nights of the year and that the Osundairo brothers would have not been able to ambush him unless they knew exactly where he was. “They knew where he was going to be because they were told,” he explained.

Following the sentencing on Thursday, Chicago Mayor Lori Lightfoot issued a statement in which she stated that the city felt “vindicated” by the ruling.

The statement said, “Jussie Smollett’s criminal conviction by a jury of his peers, as well as today’s sentencing, should send a clear message to everyone in the City of Chicago that false claims and allegations will not be tolerated.”

Why was Jussie Smollett sentenced? What are your thoughts on this…