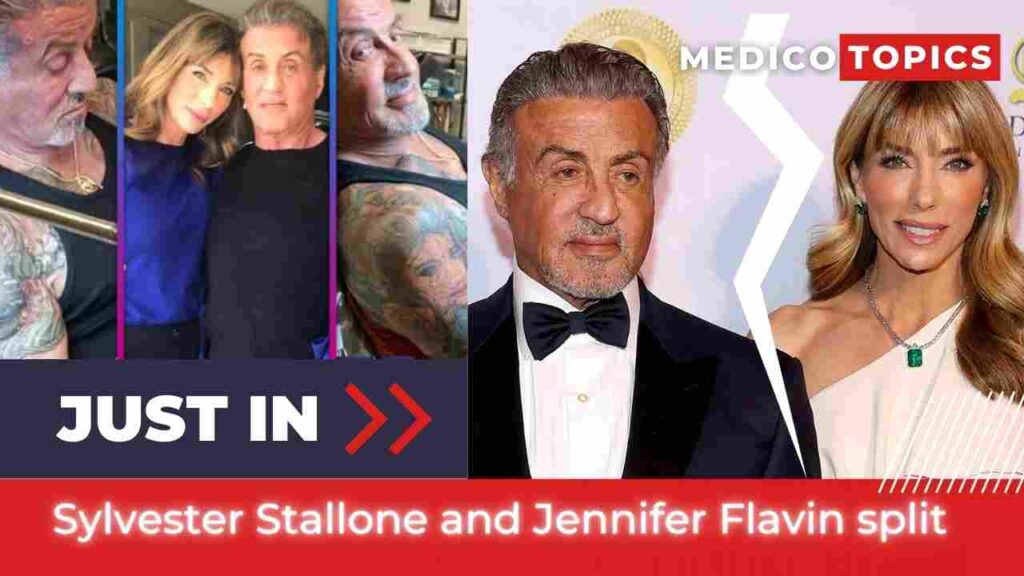 Sylvester Stallone’s Wife Jennifer Flavin Files for Divorce, Couple Splits After 25 Years of Marriage. Let’s look out why Sylvester Stallone and Jennifer split and the cause of separation between the couples in detail

Jennifer Stallone (née Flavin), the wife of actor Sylvester Stallone, filed for divorce from him on August 19,

After 25 years of marriage, the couple has decided to split. On Friday, August 19, Jennifer allegedly filed paperwork in Florida accusing Sly of “transferring assets out of marriage money.”

A few hours after Stallone raised eyebrows with a new tattoo covering the iconic portrait of Flavin’s face on his bicep.

What happened between Sylvester and Jennifer?

Sly was seen having a bullmastiff tattoo on Tuesday, August 23, to cover up the Jennifer face tattoo he had previously on the top of his right arm.

Sly chose to visit Oklahoma City tattoo artist Zach Perez’s studio for his new tattoos when he was there filming the upcoming Paramount+ series, Tulsa King.

The artist displayed his talent in a since-deleted Instagram shot by overlaying a portrait of Butkus, the dog from Sly’s renowned Rocky movies, over the face of Jennifer.

Best day of my career as a tattoo artist!

I appreciate you letting me take care of your tattoo today, @officialslystallone.

In a selfie that Sly shared to his official Instagram account on August 14, it was possible to see the original Jennifer’s face tattoo on The Expendables star’s upper arm.

In the previous design, a picture of the model’s face was framed by floral and vegetal patterns.

When Sly was seen hiding his wife’s tattoo on Instagram, it was assumed that their relationship of more than two decades had already broken down before they officially separated.

Zach Perez discovered that Sly was concealing a huge portrait of his wife that was on his biceps. Sly had it there for many years.

The news channel stated on August 22nd that Sly decided to conceal Jennifer’s portrait on his shoulder with a picture of his rottweiler, Butkus.

However, the spokesperson for the actor at the time disputed it when questioned by the media.
The couple experienced some issues.

In addition, Jennifer left a mysterious hint on her website concerning the state of her union with Sly.

On August 10, Jennifer posted a photo of her and the three kids she shares with Sly on Instagram. Jennifer does not follow Sly on the platform.

Nothing else counts; these girls are my top priority [red heart emoji].

She captioned the picture on Instagram with “The 4 of us forever [white heart emoji] [folded hands emoji] #truth #family #forever.” jenniferflavinstallone 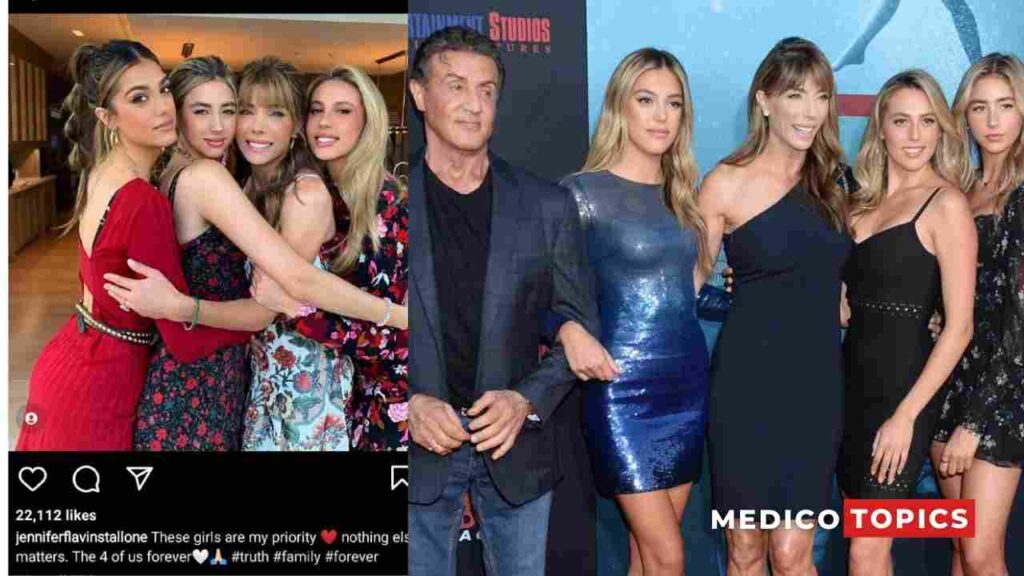 And as he previously mentioned, Sly posted a video on Instagram on July 31 of his entire family celebrating his brother’s birthday.

It’s my beloved brother’s birthday today, he wrote in his signature. wonderful time This dude is incredibly brilliant, inspiring, and entertaining at last!

It is a lovely joy that is unique. We’re fortunate to have similar bloodlines! Our upcoming reality show, hosted by Honest @ Frank Stalone, will debut in December.

As was already mentioned, the Stallone family will have a TV program that will debut on Paramount + in December. And possibly the show will include information on the split.

Sly and Jennifer haven’t publicly discussed their breakup since the news first broke.

We sincerely hope that their broken heart will soon mend!

Sylvester Stallone first met Jennifer Flavin at a restaurant in West Hollywood, California, in 1988. At the time, Flavin was just 19 years old and dining out with a friend.

Jennifer and Sly first met in 1988. Sly was already a huge Hollywood legend at the time thanks to his roles in the movies Rocky and First Blood.

He was divorced twice from his first wife Sasha Czack and his second wife Brigitte Nielsen (1985–1987). (1974-1985). Sage and Seargeoh, his two boys from his prior marriage, were already born.

Since their first meeting, the pair has been dating intermittently. Sophia Rose Stallone, their daughter, was born in 1996. The following year, Sly and Jennifer became husband and wife.

In May, Sylvester and Jennifer celebrated their 25th wedding anniversary. At the time, there were no indications that there would be problems in paradise as he sent a loving Instagram tribute to Jennifer.

There are simply not enough words to express how much this very kind, patient, and unselfish woman has meant to our lives. I only pray they could live another 25 years!

Sly captioned several images of him and Jennifer took over time. “Thank you, my love!”

Jennifer Flavin: Who is she?

She has acted in several reality shows, including “Good Day Live,” “Hollywood Women,” “American Gladiator,” and “The Contender,” in addition to her modeling career.

The reality/game show “The Contender” aired in the United States for several seasons and has subsequently inspired several spin-offs around the globe, including one in Ukraine.

In the original production, Sylvester Stallone was also present.

The Home Shopping Network is currently where the products are sold. She and Mr. Stallone have three daughters together.

The age difference between Sylvester Stallone and his wife:

Sylvester Stallone’s birthday is July 6, 1946. Jennifer Flavin was born on Aug. 14, 1968. Stallone is 22 years elder than his present wife. Comparatively, he is 17 years older than his ex-wife Brigitte Nielsen and just four years more senior than his first wife Sasha Czack.

Stallone has had three marriages. From 1974 through 1985, he was married to Sasha Czack in his first union.

Each of them had two boys.

Sage Moonblood, their oldest child, was born in 1976 and died in 2012 due to a heart issue.
Seargeoh, their youngest son, was born in 1979 and was identified as having autism when he was relatively small. 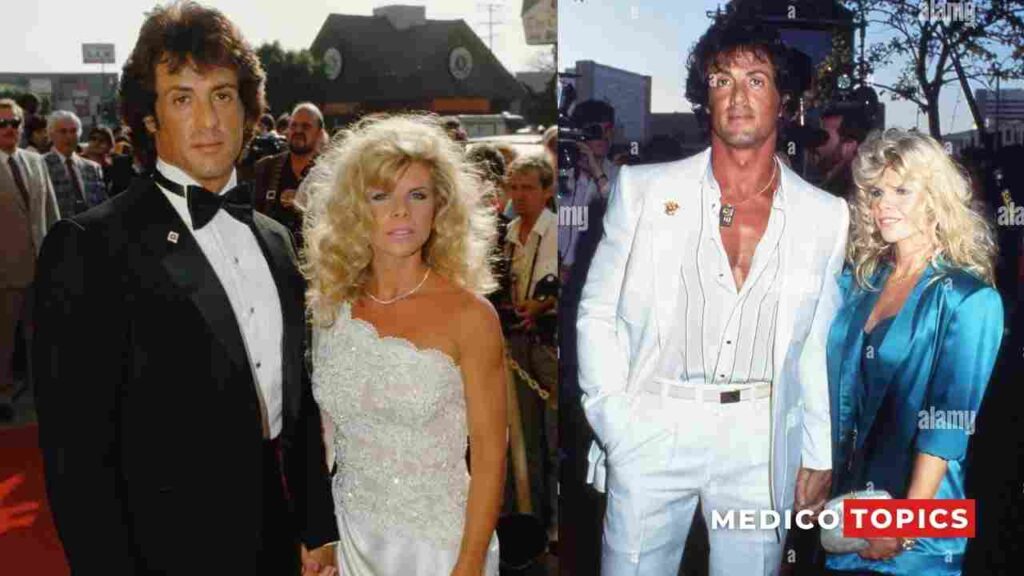 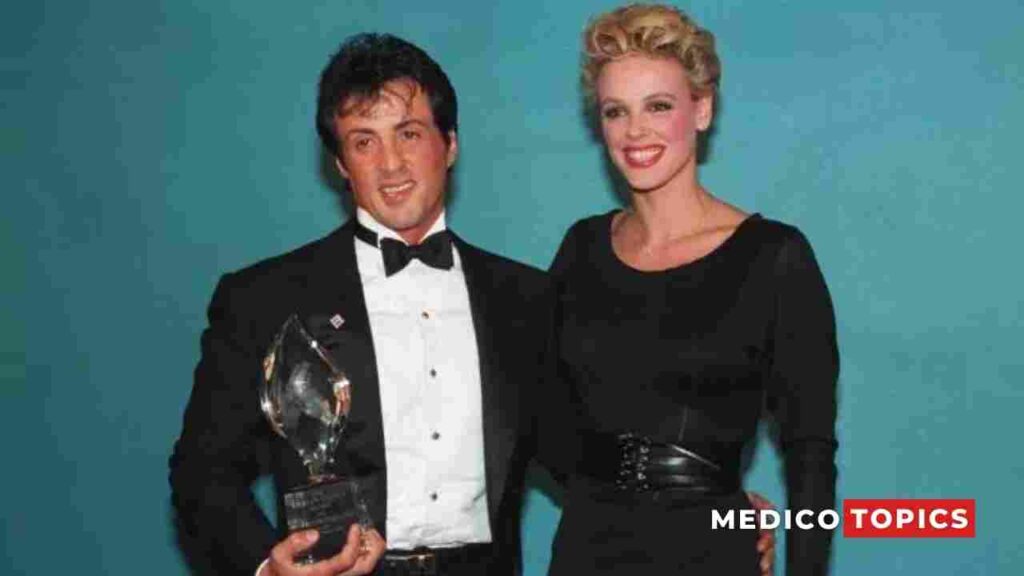 Since 1997, they have been married. Given that she filed for divorce in August 2022, they are currently estranged. 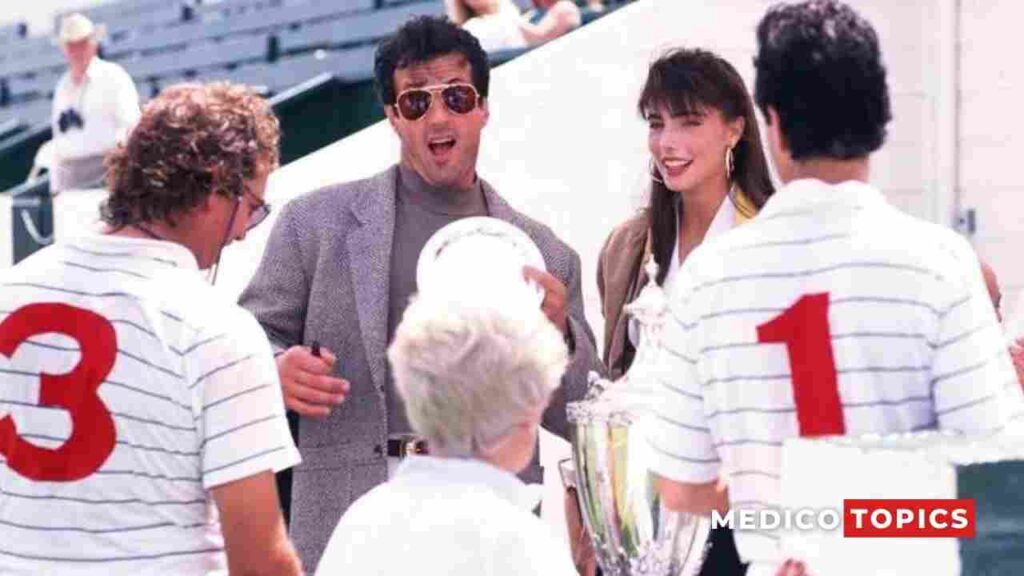 How did Len Dawson die? Cause of death Revealed

How did Jaimie Branch die? cause of death Revealed