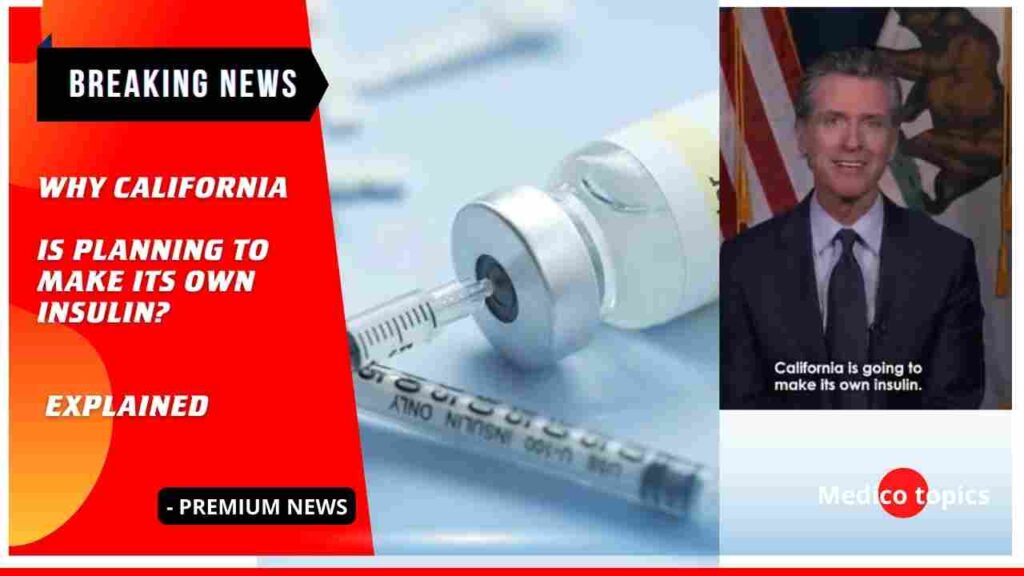 In response to extremely high prices for the life-saving medication that have made it unavailable to certain diabetics, California Governor Gavin Newsom revealed Thursday that he had passed a budget that allocates $100 million for the state to produce its insulin. The price of insulin, according to Newsom in a video he posted, “epitomizes market failings more than anything else.”

Many Americans pay between $300 and $500 out of pocket each month for this life-saving medication. Right now, California is taking control of the situation.”

California is going to make its own insulin.

It’s simple. People should not go into debt to get life-saving medication. pic.twitter.com/yB4mpGjtQO

Who makes insulin for California now?

Eli Lilly, Novo Nordisk, and Sanofi are the three biggest producers of insulin in the world.In the US, there is a lot of competition for insulin.

And the patients are only provided with insulin by Novo Nordisk, Sanofi, and Eli Lilly. Because these three companies cover over 90% of the global market for insulin.

Other companies like Mannkind, Liatris, and several firms sell insulin outside of the US.

Cause of insane insulin Price?

Why is insulin so expensive for patients in the USA and other countries?

Diabetes, a collection of diseases where the blood sugar level is excessively high, affects around 37 million Americans.

A drug based on the naturally occurring hormone that aids in controlling blood sugar is needed by more than 7 million of those individuals. This medication is called insulin.

The rising cost of insulin is one of the main issues facing patients and medical professionals. In the last ten years, out-of-pocket expenses have doubled while the price of insulin has tripled in the US. One in four patients claims to be forced to restrict their insulin due to financial constraints.

when there are only a few suppliers and a high level of demand for a specific medication, producers can raise costs without facing much backlash.

some crucial reasons for this increased price.

The insane price of insulin explained

Colorado just made history by being the first state to cap insulin costs at $100 per month. Most Americans with diabetes already cannot afford these medications’ list prices, which can be over $300 per vial in some situations.

By 2016, the average monthly cost had risen to $450, and that number has continued to grow. As a result, up to one in four diabetics are now skipping or reducing doses that could save their lives.

According to the Health Care Cost Institute, the average cost of insulin, which has been available in various forms since the 1920s, more than quadrupled from approximately $234 per month in 2012 to around $450 per month in 2016.

Since 2016, the price has increased, even more, leaving those without insurance and those with large deductibles in danger of having to restrict their doses and, in some circumstances, forgoing treatment altogether from around $234 per month in 2012 to around $450 per month in 2016.

How much does insulin cost today?

“The unfairly high cost of insulin,” which can cost up to $350 per bottle and which diabetics frequently require two bottles every month.

A patient with diabetes might have paid $175.57 15 years ago for a vial of the long-acting insulin Humulin R U-500 that contained 20 milliliters.

The same little bottle would cost him $1,487 today, according to statistics on wholesale procurement costs from Elsevier’s Gold Standard Drug Database.

A patient with Type 1 diabetes spent, on average, $5,705 on insulin each year in 2016. According to a study published on Tuesday by the nonprofit Health Care Cost Institute, the average cost per patient in 2012 was $2,864, or approximately half that amount.

Why did California Government decide to make its insulin?

Many Americans spend between $300 and $500 each month on insulin.

Gov. Gavin Newsom (D) of California declared on Thursday that the state would begin making its insulin, bringing down the cost of a necessary medication that often costs patients with diabetes years and thousands of dollars to obtain.

The action was taken more than three years after Newsom’s first day in office, when he signed an executive order that, in his words on Thursday, “set the state on the path toward manufacturing its medications.”

He declared in January 2020 that the state will try to develop its own prescription medicine label.

The statement also comes as politicians work to reduce the price of insulin; on Wednesday, Senate Democrats unveiled a plan to reduce prescription costs.

In California, we understand that spending on life-saving medication shouldn’t leave people in debt.

The Los Angeles Times reported last month that the Newsom administration had previously stated that state-produced insulin may reduce insurer costs on the therapy by 70%.

If everything goes as planned, those savings would be distributed to customers.

In those without diabetes, the pancreas is capable of producing insulin, a necessary hormone that aids in the body’s utilization or storage of the glucose obtained from the diet.

However, diabetes interferes with this process. For the 1.6 million Americans who have Type 1 diabetes, the pancreas quits producing insulin, thus patients need to get injections of artificial insulin to keep alive.

Although their pancreases still produce insulin, their bodies don’t always react well to it, so they occasionally require hormone injections.

Over the past ten years, the cost of the four insulins that are most frequently prescribed has tripled.

The free-market approach to medications used in the United States, where drug makers bargain costs with private insurance, is credited by experts with contributing to that increase.

However, Medicare, the government-sponsored insurance for seniors 65 and older and the biggest purchaser of medications in the United States, is not permitted to negotiate over prices.

The cost of creating better versions of the medication, as claimed by drug companies, is what is driving up the price of insulin, although many health doctors argue that these improvements are small-scale and do not correspond to the price increases.

According to Ropka, if California’s new law is successful in bringing down medicine costs, other states may consider enacting similar legislation.

“I would expect that populous states like New York could want to look at this and determine whether they would like to also become a customer for these medicines and get into arrangements.”

KEEP READING,
Who shot former Japanese PM Shinzo Abe? Suspect & Reason Explained
Who is Jose Alba? Bodega clerk who stabbed Austin Simon in self defense
Follow us on Twitter to get instant notifications on the latest news.
lavanya

[…] Why California is planning to make its own insulin? Explained […]