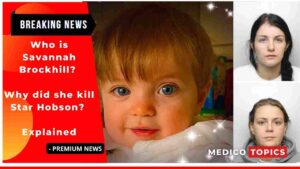 “Savannah has her strange fan club within the prison, and a lot of women appear to like her.”

According to the source, Brockhill has also been bragging about her cell, which has an en-suite, TV, and views.

“It’s situated around forests, so birds and squirrels come and it’s beautiful to see,” she explained.

This week, it was revealed that the killer, from Keighley, West Yorkshire, intends to appeal her sentence after claiming that Star’s mother, Frankie Smith, administered the deadly kick, which was denied in court.

The 28-year-old is serving a life sentence at Cheshire jail for the murder of Star Hobson, her girlfriend’s 16-month-old daughter.

In 2020, she beat little Star to death by stamping on her in an abuse crusade.

What Prison cell did Brockhill receive?

Despite her heinous act, it has been reported that Brockhill is receiving fan mail and cards from ‘admirers’ in her ‘cushy’ prison cell.

She has also had money deposited into her prison account for canteen purchases.

What did the jailer say?

On Sunday, a jail insider informed the Daily Star that the killer is ‘enjoying the attention.’

“It is a sad reflection on society that certain members of the public enjoy writing to a killer like this – and even praising her with gifts,” they told the tabloid.

“A lot of them are from admirers. It’s hard to believe, but Savannah is relishing the attention and considers herself a celebrity and prison pin-up.”

Is Brockhill bulked in prison?

According to the source, Brockhill has admirers in prison as well.

“She’s bulked out,” they said. She exercises out three times a week, doing crunches and press-ups in her cell.

Brockhill was sentenced to a minimum of 25 years in prison for murder in December of last year.

The court heard of her stamping on Star during a campaign of ‘neglect, brutality, and harm.’

Smith, 20, was sentenced to eight years in prison for causing or enabling her death.

Milwaukee bridge death: How did Richard Dujardin die? Cause of death