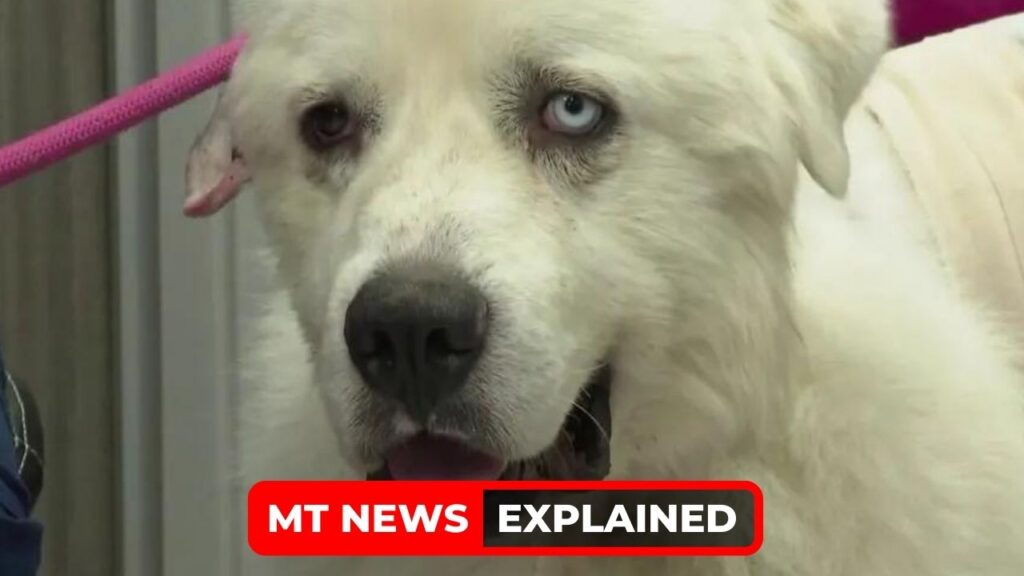 After a gang of coyotes attacked his sheep, Georgia Sheepdog fought back and killed 8 of them. Let’s see Who Casper is and how Sheepdog killed 8 coyotes to save sheep in detail.

A Georgia sheepdog that fought a gang of coyotes in combat, killing eight of them while defending his herd, is now healing from his wounds. 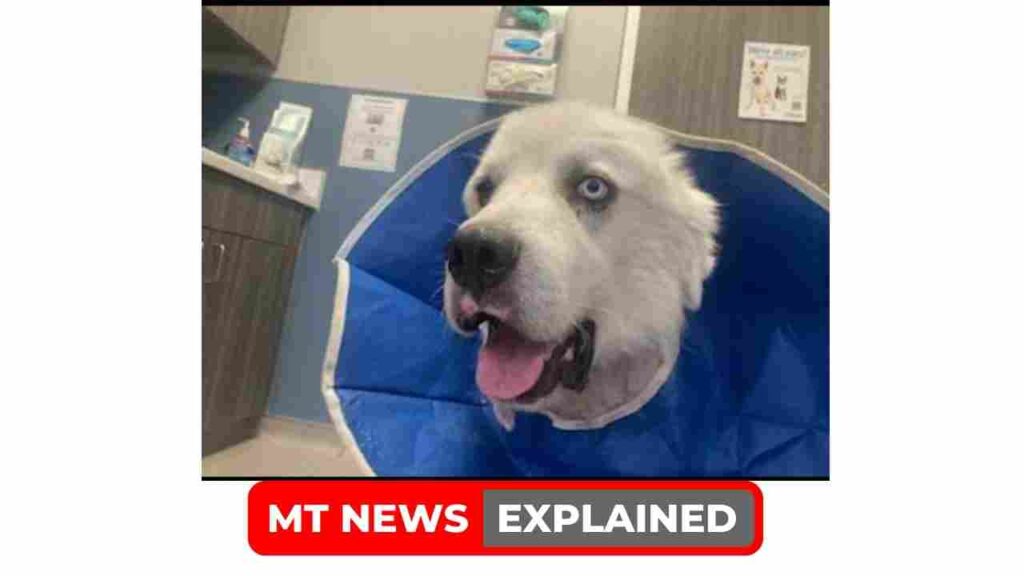 A fight between the more than six coyotes and Casper, a sheepdog who works on John Wierwiller’s Georgia farm, lasted more than 30 minutes, according to WAGA-TV.

According to a report on Thursday by 11 Alive, the incident took place on November 3 when some coyotes approached urban shepherd John Wierwille’s residence.

Owner of Casper, Wierwille, initially chased them away, but when he heard his dogs barking the following morning, he realised that Casper and Daisy had cornered the sheep for safety.

While some coyotes stood around, several had entered the pen. Casper charged into the pack, killing numerous coyotes, knowing exactly what had to be done.

MEET CASPER:) he’s a livestock dog. Casper was badly injured while protecting sheep from a pack of coyotes. @ATLNewsFirst pic.twitter.com/uA8ScpaUXV

Casper raced after the other coyotes as soon as they crossed the fence and fled, killing more of them before vanishing past a creek that bordered the property.

He guarded the sheep and killed eight coyotes, but when his owner was unable to locate him, he became concerned.

Ewe Can Do It Naturally, owned by Weirville, is a landscaping company that rents out flocks of sheep to clear brush-off properties by using the animals’ innate desire to eat that debris. 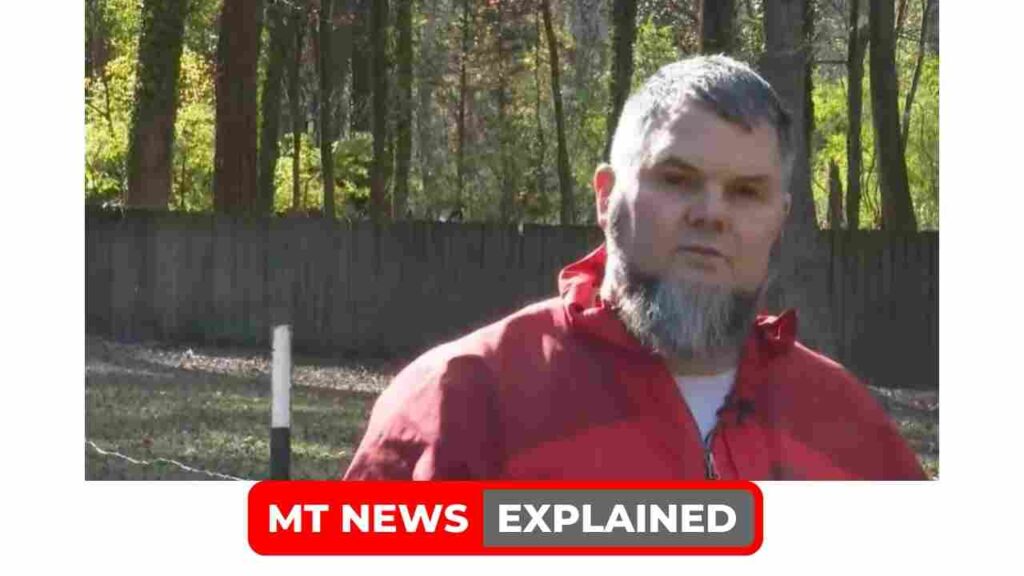 Weirville is a member of the nonprofit group Urban Shepherds, which advocates sheep grazing as an environmentally friendly way to manage the landscape.

It’s obvious how important a dog like Casper is to Weirville given his line of work.

Following the vicious battle, Casper reportedly vanished for two days, according to Wierwiller.

“We knew he was hurt because we found parts of his tail and blood and other things, so we were worried.”

Casper eventually made his way back to the farm, visibly wounded.

“He was kinda looking at me like, ‘Boss, stop looking at how bad I look, just take care of me.”

“looked like a coyote grabbed his skin and peeled it right off.”

Casper’s owner may be seen standing next to him on video footage with him wearing a bandage.

“I can’t even explain how good it is to see him right now, because I feel like there was no way he was gonna live when I saw him.”

Wierwille claimed on social media on Monday that Casper’s neck wound had been closed by veterinarians, making it simpler to manage any infection. 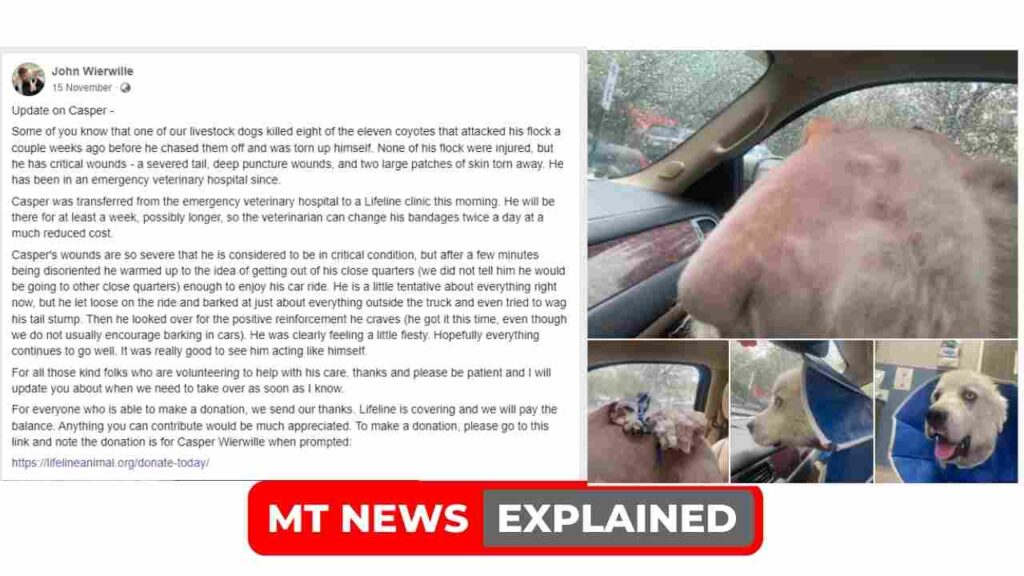 No one will ever forget how Casper performed his duties in the face of peril, even though it’s probable that his days of herding are ended.

The American Kennel Club (AKC) states that the Great Pyrenees breed is renowned for its intelligence, patience, and serenity.

The Veterinary staff at Lifeline Animal Project, where Casper is still receiving treatment more than a month later, was concerned that the dog wouldn’t be able to recover.

Amazingly, Casper has recovered more fully than they could have anticipated.

According to the Atlanta Coyote Project, it’s not unusual to observe a group of coyotes racing together while they are out and about in the metro Atlanta area.

“This is extremely unusual behavior for coyotes, and we suspect that there might be extenuating circumstances,”

said Chris Mowry, a professor of biology at Berry College.

Coyotes live in tiny family groups and are rarely violent, according to Mowry, who studies the behavior of coyotes in the metro area as part of the Atlanta Coyote Project.

“In this particular situation, the only thing that makes sense is if there was a large litter this year and the pups hadn’t yet dispersed,”

“This could potentially make sense if there are lots of resources available, which sounds like it might be the case in this area of Decatur.”

Casper’s medical expenses are being paid for with assistance from ‘The LifeLine Animal Project’, a group whose goal is to stop the killing of healthy animals.

The group started a GoFundMe to raise money to pay the $15,000 hospital cost, but it has already raised more than it expected to, so it will utilize the  extra  money to help save more lives of animals.

People have been praising the dog in social media.

“you’re a good owner man. just keep up learning about dog-handling. it’s an endless lesson but a magnificent and unique one. our shepherds here know NOTHING about their OWN dogs.”

“This dog deserves a new home where he is cared for and protected. You watched him fight coyotes for 30 mins then WENT TO BED. This is so crazy to me.”

“This story made my heart swell. Casper is one tough customer!! What an amazing dog! God bless him. Keep testing him like a king!!”

How did Jim Kolbe die? Longtime Arizona GOP Rep. Cause of death Explained

Move Nightclub death: How did the 16-year-old girl die? What tablet she took? Explained