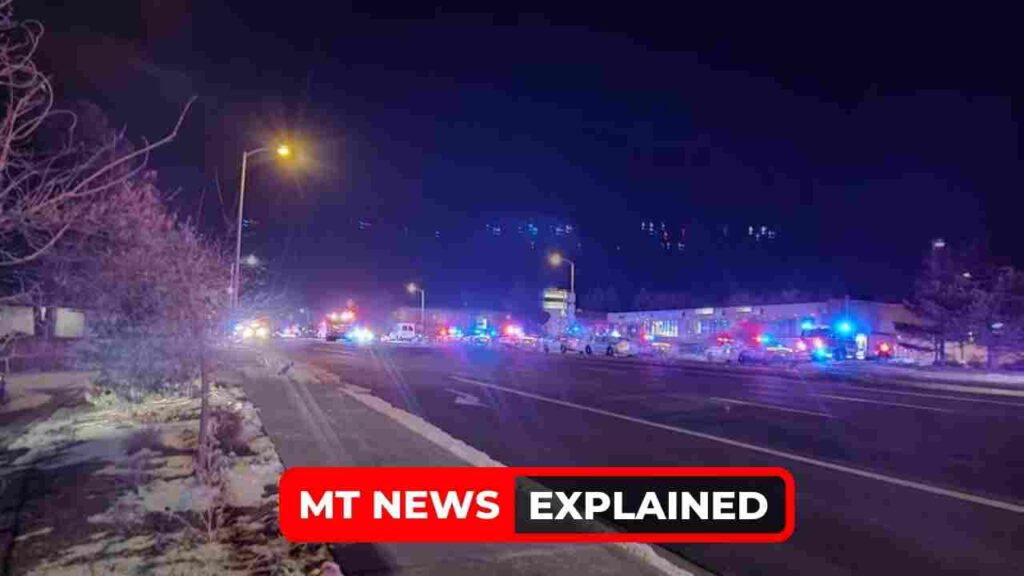 Who is Anderson Lee Aldrich?

Suspect was named by the police within hours after five people were killed and 18 more hurt inside LGBT+ nightclub Club Q. According to Mr. Vasquez, the suspect entered the club and started firing a long gun “immediately.”

Mr. Vasquez said, at least two “heroic people within the club confronted and fought with the suspect.” Mayor John Suthers remarked, “It’s obvious that what they did saved lives. According to a post on the club’s Facebook page, people inside the premises assisted in apprehending the gunman.

The suspect was previously responsible for bomb threats and was arrested with explosives and weapons in June of last year. Anderson Lee Aldrich already jailed for making the homemade explosives.

The suspect entered Club Q and started shooting right away. At least two courageous people inside confronted the culprit and engaged him in combat to halt additional murders.

Two firearms were found at the site, according to law authorities, and the suspect is believed to have used a long rifle during the shooting. Investigators are attempting to ascertain the motive behind the shooting.

A statement on the club’s Facebook page reads, “Our [prayers] and thoughts are with all the victims and their families and friends.”

“We thank the quick reactions of heroic customers that subdued the gunman and ended this hate attack.”

The culprit was later arrested and sent to the hospital with unspecified wounds. After receiving “several” calls reporting an active shooter inside the club, Colorado Springs Police Department spokesperson Lt. Pam Castro claimed that when police officers arrived on the scene at 11.57 p.m.

What happened in Colorado Gay club?

On Saturday night, Club Q had musical performances, including its regular Diva Drag Show. At nine o’clock in the evening, drag act Del Lusional hosted a punk and alternative presentation, which was followed by a DJ and dancing from 11 pm until the early morning hours.

Suddenly, a gunman started shooting, and as a result, 5 people were killed and 18 others were injured.

“I was walking backstage when I heard the gunshots. I only saw the aftermath and even then, I didn’t wanna look,” Del Lusional said on Twitter.

Another person said: “I never thought this would happen to me and my bar. I don’t know what to do with myself. I can’t stop hearing the shots.”

According to a witness who talked with Colorado Public Radio, one victim fled the scene for a neighboring 7-Eleven where they both passed out.

One of the victims had been shot seven times when he ran over here in an effort to seek assistance.
“He fell down. That warning tape is there at the front for a reason.

About 11 ambulances and more than 30 firefighters arrived on the site, and ambulances transferred three victims at a time to nearby hospitals.

According to a police official, they appear to have captured the shooter. “They did locate one individual who we believe to be the suspect inside. At this point in time, the suspect is being treated, but is in custody.” Although the club itself has already referred to this as a hate crime, police have not yet discussed or disclosed the motive. Nearly a dozen ambulances have sped to the area to treat and evacuate the injured while the FBI is already present.

Club Q stated their grief saying, “Club Q is devastated by the senseless attack on our community. Our thoughts are with all the victims and their families and friends. We thank the quick reactions of heroic customers that subdued the gunman and ended this hate attack.”

This attack on gay bars is by no means the first. The worst was possibly in 2016, when an Orlando gunman opened fire at Pulse nightclub, killing 49 people.

What was the people’s reaction?

Pray for my friends over at Club Q. I can’t believe this. The place gave me the freedom to be myself when I was just 17 years old. I went in alone and came out with family. My condolences and prayers go out to all affected by this senseless act of hatred. Spread love to all❤️

I am devastated to wake up to this morning’s news of the mass shooting at Club Q in Colorado Springs last night. There are no words that can express my sorrow, outrage, anger, fear, and devastation. This brings back all the fear and feelings and sorrow I felt on the morning I woke up to hear about the Pulse shooting. As these events pile up each one is worse than the last. Hatred against the LGBTQ community must stop. We have lost too many. I’m sending love to everyone who is grieving today and I am mourning with you.

The Club Q shooting in Colorado Springs was horrific, sickening, and devastating news to wake up to. My heart breaks for the family and friends of those lost, injured, and traumatized in this horrific shooting. I have spoken with Mayor Suthers and clarified that every state resource is available to local law enforcement in Colorado Springs. We are eternally grateful for the brave individuals who blocked the gunman, likely saving lives in the process, and for the first responders who responded swiftly to this horrific shooting. Colorado Gay Club stands with our LGTBQ Community and everyone impacted by this tragedy as we mourn.

This morning I was awakened early to the tragic news of the shooting at Club Q in Colorado Springs. 5 people out for a fun night in what they thought was a safe place will never return home to their families or loved ones. Others remain in critical condition. The suspect was apprehended, and in the hours and days ahead we will no doubt learn more. But no matter what we learn, this horrific act will never make any rational sense and is quite simply an act of evil. This morning I spoke with Mayor Suthers and the club owners, and I expect to speak with the victims families in the near future. My heart is truly broken over this tragedy hitting so close to home in so many ways.

My heart goes out to everyone at Club Q. A lot of my friends go to this club and I am absolutely heartbroken by the news. This was a safe space in our community. I just. I don’t understand, people are sick.

How did Hedi Fried die? Holocaust survivor cause of death explained