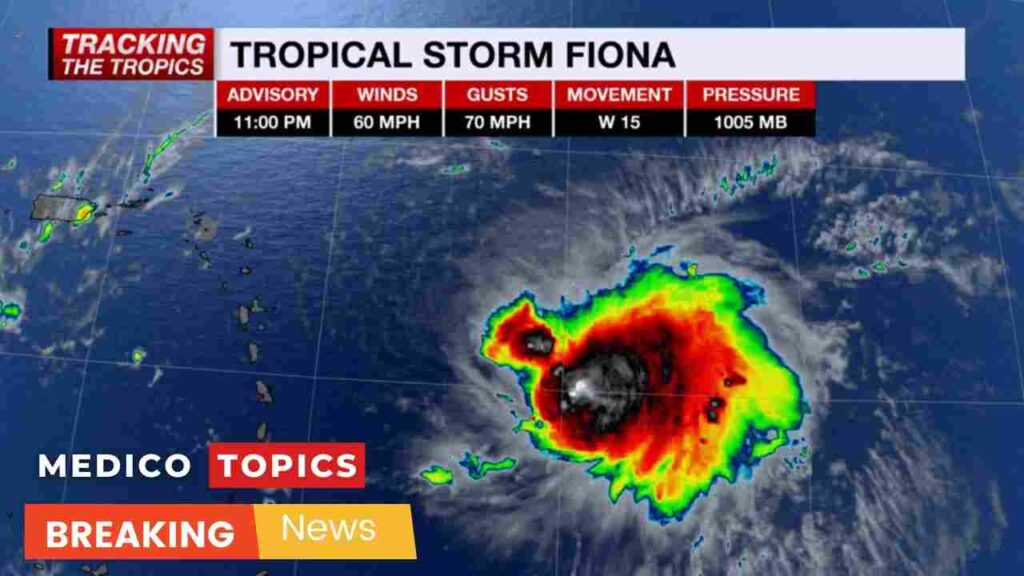 Stormy weather Fiona was predicted to dump a lot of rain on the Caribbean throughout the weekend. Let’s see What is Tropical Storm Fiona and whether it turn into a hurricane in detail

What is Tropical Storm Fiona?

The name Fiona has been used for seven tropical cyclones worldwide: three in the Atlantic Ocean, three in the Australian region, and one in the South-West Indian Ocean.

In the South-West Indian:

On Thursday night, Tropical Storm Fiona was still gaining power as it moved toward the Leeward Islands, where it was predicted to drop several inches of rain on Friday.

Forecasters predicted that Fiona would pass through the Leeward Islands late on Friday before heading into the Virgin Islands and Puerto Rico throughout the weekend.

The storm’s strength was not anticipated to significantly vary over the next few days.  Additionally, the storm was predicted to bring the area a sizable amount of rain.

Where is Tropical Storm Fiona?

Tropical Storm Fiona is centered around 65 miles southeast of Puerto Rico and is producing a large area of showers and thunderstorms on the eastern side of its center of circulation.

A tropical storm is a tropical cyclone that has maximum sustained winds between 39 and 73 mph. Once a tropical storm forms, the National Hurricane Center gives it a name off one of six rotating lists.

What did the National Weather Service announced?

On Thursday, the National Weather Service in San Juan, Puerto Rico, announced that there will be flash flood warnings in place until Sunday for both the island and the U.S. Virgin Islands. According to Jamie Rhome, acting director of the Hurricane Center in Miami, “we are not looking at quick intensification at this point, just maybe a slow and steady rise intensity as it marches towards the Leeward and Windward Islands.”

Hispaniola’s lofty mountains, he continued, “may play a huge factor in where Fiona goes.”

On Wednesday, the St. Maarten administration urged citizens to exercise caution. To ensure that their property is storm and hurricane-ready, officials asked residents and business owners to assess their hurricane season preparations.

On Thursday, the administration added that it was erecting barricades to obstruct or restrict entry in flood-prone areas. Officials in St. Kitts and Nevis issued a similar warning.

According to data from a plane designed to study storms, the storm experienced stronger gusts on Thursday afternoon, according to the Hurricane Center.

After a record-breaking 30 named storms in 2020, there were 21 storms last year. Meteorologists have run out of names to use to identify storms during the Atlantic hurricane season for the past two years; this has only happened once before, in 2005.

With each passing year, the connections between hurricanes and climate change have become more obvious. According to data, hurricanes have grown more powerful globally over the last forty years.

Over time, a warmer globe may see bigger hurricanes and more of the most severe storms, however, there may be fewer storms overall as a result of variables like increasing wind shear that prevent weaker storms from developing.

Because of the increased water vapor in the warmer atmosphere, hurricanes are also becoming wetter. According to experts, storms like Hurricane Harvey in 2017 produced far more rain than they otherwise would have.

The most devastating component of tropical cyclones, the storm surge, is also increasing as a result of rising sea levels.

Kalani David died at Costa Rica: What happened? Cause of death Explained