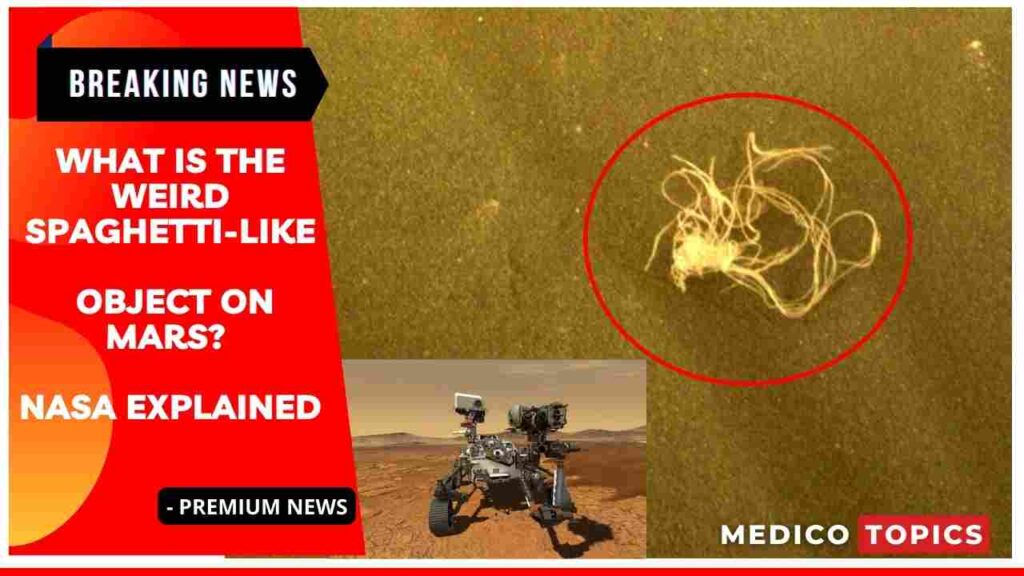 NASA released a picture taken by the Mars 2020 Perseverance Rover, which discovered a strange spaghetti-like object. Let’s see what the Weird Spaghetti-Like Object on Mars is and NASA explanation about the image captured in detail

A photograph of a “weird tangle,” which resembles a partially uncoiled ball of string. Also, in some people’s minds, a quite long and thin noodle, has been returned from Mars by NASA’s Perseverance Rover.

What image is this?

In the image, a thread or noodle is seen sandwiched between two flat, smaller rocks on Mars and a larger, more angular boulder on Mars’s left. 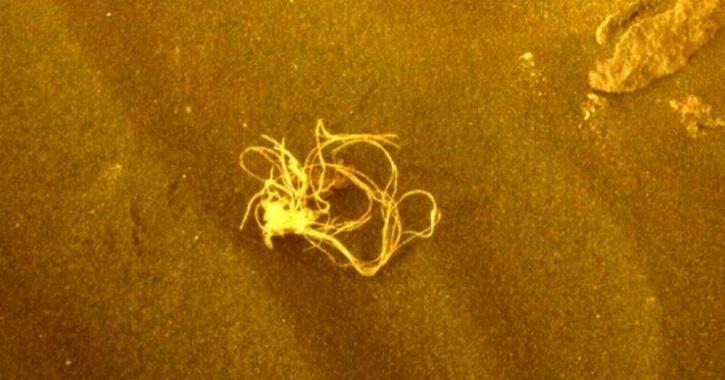 Another zoomed-out shot illustrates the object’s size as it lies near the Perseverance Rover’s wheels and is surrounded by other boulders and a portion of the Martian terrain.

Another zoomed-out view demonstrates the object’s size as it lies near the Perseverance Rover’s wheels. And is surrounded by other boulders and some of the Martian terrain.

When did Perseverance capture the image?

On July 12, 2022, Perseverance captured an image of what some are saying reaches a bit of leftover spaghetti, or possibly a small Martian tumbleweed.

NASA’s Perseverance rover has caught quite a few images during its mission on the Red Planet. People have spotted what appeared to be a small doorway, to a mysterious figure laying on the surface of the planet.

The front left hazard avoidance camera A of the Perseverance Rover captured the picture on July 12.
With the help of its six HazCams, the rover can detect dangers like deep tunnels or dunes as it travels.

What did NASA scientists confess about this image?

NASA specialists have speculated that the object appears to be man-made.

At this point, there is no official answer from NASA on what the object could be, but CNET has conveyed that the most likely answer is it is Perseverance’s landing gear.

It wouldn’t be very unpredictable, considering it was only last month that NASA’s Mars rover spotted the thermal blanket.

Therefore, it is used to protect it on its entry to the Red Planet. And may be a component of the rover’s descent stage.

This makes sense, considering that a similar unusual object that was seen. And resembled a square sheet of foil.  Moreover, it was thought by experts to be a thermal blanket from a jet pack during the descent stage.

The drop stage had hit roughly two kilometers away from the spot the image was taken. Also, they don’t know if it fell this far during the drop or by wind or other factors.

NASA says the spaghetti-like object could be from a parachute-like structure for the descent or some part of the lander.

Exciting news: Not only did I recently grab a new rock core (#11), but plans are coming together to bring these samples back to Earth. A new group of robots (including next-gen helicopters!) could join me for an unprecedented team-up.

What is the Perseverance Mars rover?

What did Mars 2020 Perseverance Rover do?

The Mars 2020 Perseverance Rover’s mission to look for evidence of prehistoric microbial life will further NASA’s investigation into the possibility that Mars ever supported habitation.

The rover has a drill to gather rock and soil core samples from Mars, which it then stores in sealed tubes for collection by a follow-up mission that will return them to Earth for a thorough investigation.

Perseverance will also put new technology to the test to open the door for future Martian exploration by humans.

How did Vin Scully die? What happened? Cause of death Revealed

Tecovirimat (Tpoxx) MonkeyPox drug: When will it be available? Side effects Explained