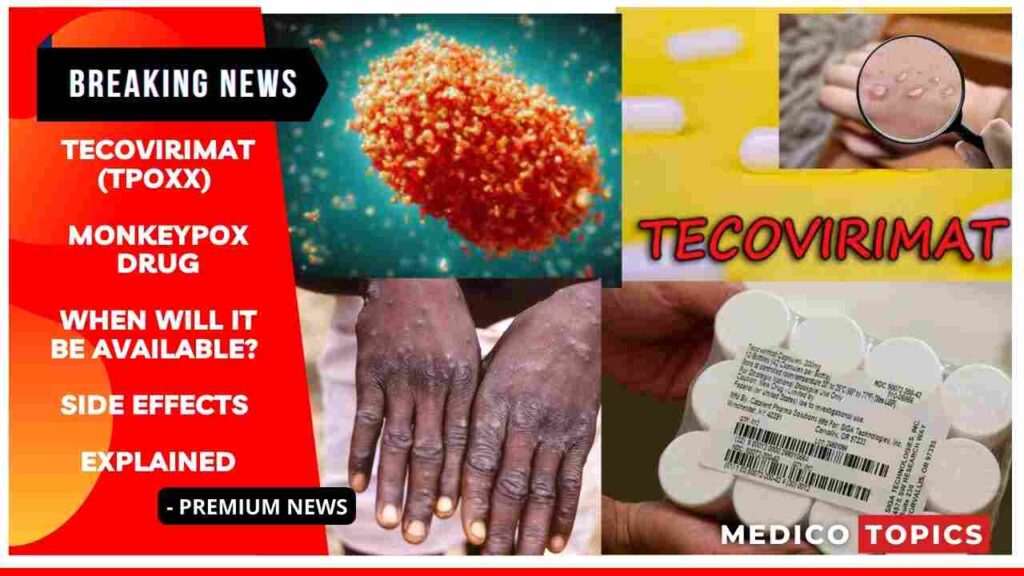 Several groups of monkeypox have been reported starting in May 2022 in several countries that don’t normally report monkeypox, including the U.S. Cases. Tecovirimat is an antiviral medication used to treat monkeypox. Let’s see about the Tecovirimat (Tpoxx) MonkeyPox drug, its availability, and Side effects in detail.

On July 13, 2018, the FDA approved the treatment of smallpox for Tecovirimat (ST-246, TPOXX), an antiviral with in vitro activity against the smallpox virus (variola).

Although smallpox was declared extinct in 1980, it is still possible that there are hidden reservoirs of variola or that the virus may be produced from available genomic sequences.

So it is of great interest that effective antiviral chemotherapy is available.

It has efficacy against all known orthopoxviruses in vitro, including variola,60,61 but not against other recognized viruses.

Moreover, it has been found after screening more than 350,000 different chemicals from a chemically varied library.

The FDA has given Tecovirimat (also known as TPOXX or ST-246) approval to treat both adults and children.
The people have Variola virus-induced human smallpox illness.

However, the FDA has not approved its use for diseases caused by other orthopoxviruses, such as monkeypox.

Because of this, the CDC established a process for enhanced access to investigational novel drugs (EA-IND).

This allows tecovirimat to be used as the primary or only treatment for illnesses brought on by non-variola orthopoxviruses, such as monkeypox, in both adults and kids of all ages. 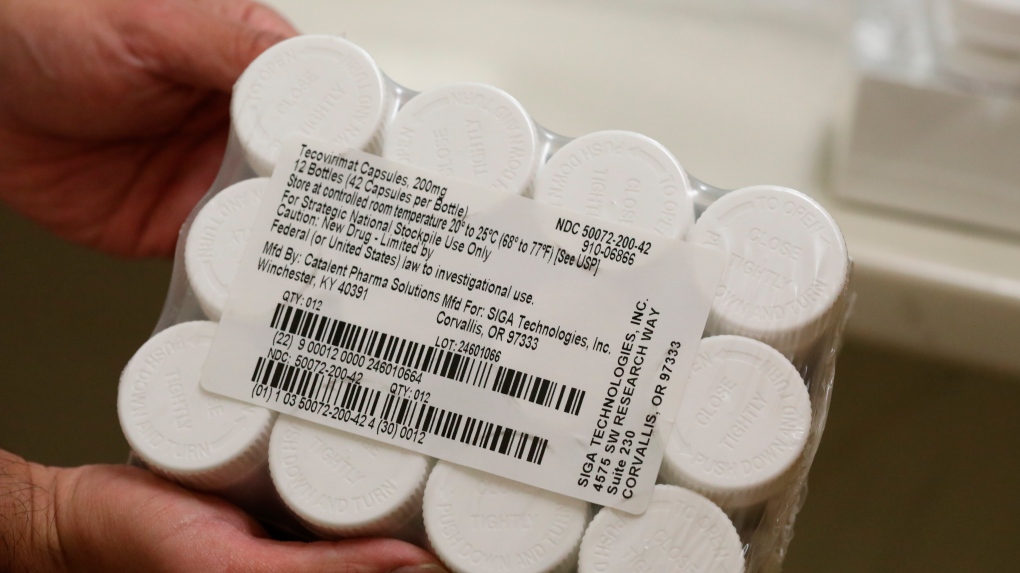 Jonathan Parducho, a pharmacist, holds a box of capsules of the antiviral drug Tecovirimat, a drug to treat smallpox, at ZuckerbergSan Francisco General Hospital on Friday, July 29, 2022, in San Francisco. (Lea Suzuki/San Francisco Chronicle via AP)

What is Tecovirimat (TPOXX)?

As part of an Expanded Access Investigational New Drug (IND) protocol from the Centers for Disease Control and Prevention.

Both oral capsules and an IV formulation are accessible to children and adults.

Tecovirimat has gained success in treating sickness and lowering the risk of death from orthopoxviruses in animal trials, despite the lack of data on its usefulness in treating monkeypox infections in humans.

This medicine is safe in human clinical studies, with relatively modest adverse effects.

When will Tecovirimat (TPOXX) available?

Tecovirimat (TPOXX) is an antiviral drug available through the Centers for Disease Control and Prevention (CDC).

To date, tecovirimat has been prescribed for over 400 patients in NYC.

Recently the FDA and CDC facilitated this protocol so that therapy with tecovirimat can begin upon acquiring informed permission from the patient.

No pre-registration is required and evaluations can be done by telemedicine.

Providers are urged to take the vital steps to prescribe tecovirimat when implied for patients that have a positive test result.

NYC providers who want to prescribe tecovirimat and can stick to the IND protocol can email MPXtherapeutics@health.nyc.gov for information on free delivery to patients or request supplies for a pharmacy at their facility.

For more information about monkeypox, visit the NYC Department of Health and Mental Hygiene’s Monkeypox Information for Providers webpage.

Monkeypox infection outbreak in the USA

The number of cases of monkeypox is increasing in U.S. states, and three governors have declared states of emergency in the past week as a result of the outbreak’s continued global spread.

According to data released on Monday by the Centers for Disease Control and Prevention, the number of confirmed cases of monkeypox has now topped 23,600 worldwide.

The outbreak, which was first identified in Europe in late April, has spread to 80 countries, the majority of which had not previously seen a sizable number of cases of the uncommon viral infection.

According to the CDC, the United States had recorded more than 5,800 confirmed cases as of Monday.

States with a large population are leading the way in terms of instances, with 1,390 cases in New York and 827 cases in California.

How well does the drug work to prevent monkeypox?

An antiviral with activity against orthopoxviruses including smallpox and monkeypox, tecovirimat is marketed under the trade names Tpoxx and others.

It is one of only two medications—the other is brincidofovir—approved for treating monkeypox in the US and the EU, and it is the first antipoxviral medication to receive approval from the US Food and Drug Administration.

The medicine, created by Siga Technologies, has two million doses available in the US as part of the strategic national stockpile in case of a bioterrorist strike.

Side effects of Tecovirimat (TPOXX)?

Serious side-effects of TPOXX include:

Immediately seek medical attention if you experience any of the above symptoms.

TPOXX’s most frequent Side effects include:

Immediately visit the doctor If you experience any adverse effects that annoy you or do not go away.

Not all of TPOXX’s potential negative effects are included here. Ask your doctor or pharmacist for more details. For medical advice about side effects, contact your doctor.

How much dosage of TPOXX is safe?

TPOXX should be taken by adults in doses of 600 mg twice daily for 14 days. TPOXX dosage for children is determined by body weight.

What Ingredients or Supplements Respond with TPOXX?

The drugs repaglinide and midazolam may interact with TPOXX. Give your doctor a complete list of all the drugs and supplements you take.

Is using TPOXX during pregnancy safe?

Before using TPOXX, inform your doctor if you are pregnant or want to become pregnant as it is not known how the medication will impact a fetus.

TPOXX’s ability to cross into breast milk is uncertain. Before breastfeeding, speak with your doctor.

Will India demand the drug?

A small amount of the drug may be needed, according to Dr. Sushil Jain, a consultant pulmonologist at Masina Hospital in Mumbai.

In contrast to COVID-19, monkeypox spreads very slowly, but there is a chance of it doing so, he added.

Therefore, in some circumstances, it may be necessary to administer this medication to immunocompromised patients who get the virus to reduce the risk of consequences, according to Jain.

“Everyone might not need a certain quantity of stock. It will be needed, but not in excess.

He emphasized the necessity for India to retain some stock on hand so that it is accessible to people who require it at the appropriate time.

Jain added, however, that because prevention is more important than therapy, proactive measures should also be considered, such as early detection, prompt isolation, and immunization.

Additionally, Dr. Laxman Jessani, an infectious disease expert at Apollo Hospitals in Navi Mumbai, stated that Tecovirimat is the preferred medication for treating monkeypox and will help treat cases of the disease that have been positively identified.

However, he added, “it is more crucial to concentrate on monkeypox immunization as it may be more advantageous.”

What is monkeypox infection?

A rare condition known as monkeypox, which can infect anyone.

The virus can result in flu-like symptoms, swollen lymph nodes, and a rash that frequently starts on the face and spreads to other regions of the body.

Without close contact, monkeypox cannot easily transmit to people. In the United States, monkeypox cases are currently quite uncommon.

A new, unexplained rash that progresses into a hard, rounded, pus- or fluid-filled skin lesion is how monkeypox is commonly recognized. Other early indications comprise:

Monkeypox typically clears up without the need for therapy in two to four weeks.

Antiviral drugs that have been used to treat smallpox can be utilized even though there is no particular treatment for monkeypox.

Those who have come into contact with someone who has monkeypox may be eligible to receive a vaccine to stop the disease from developing or lessen the severity of the symptoms.

DHS will collaborate with medical professionals to procure immunizations and treatment as needed.

How to prevent monkeypox infection?

Who are Bernardo and Arthur Lima: How the twins got separated? Explained

What is asteroid 2022 OE2? When will it cross the Earth? Explained