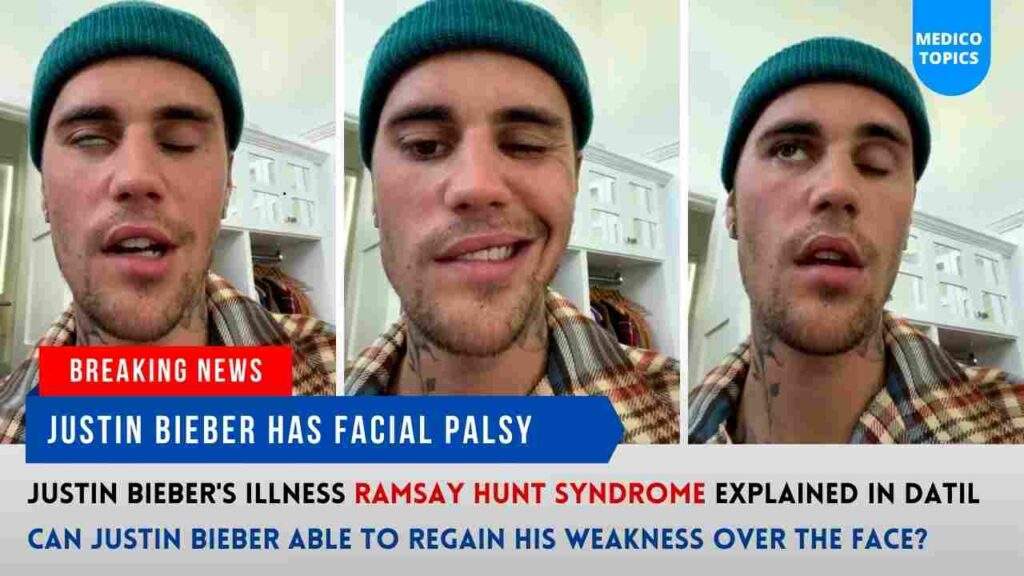 Justin Bieber has stated that he has Ramsay Hunt syndrome, which causes facial paralysis as a result of a virus. The 28-year-old musician recently canceled certain dates on his Justice World Tour and turned to Instagram to explain why. Let’s see what is this disease, and what are the symptoms, signs, and treatments.

‘Hey everyone, Justin here, I wanted to update you guys on what’s been going on,’ he said.

‘Obviously, as you can probably tell from my face, I have Ramsay Hunt syndrome, which is caused by a virus that destroys the nerves in my ear and facial nerves, paralyzing my face.’

Justin went on to say that it was ‘very serious,’ telling followers, ‘Obviously, my body is telling me I’ve got to slow down.’

As a result of the nerve problem, Justin was unable to smile, blink, or flare the nostril on one side of his face.

‘So for people who are disappointed by my cancellations of the future shows, I’m just physically not capable of doing them,’ he added. As you can see, this is a severe situation that I wish wasn’t the case.

‘However, my body is telling me that I need to slow down, and I hope you understand.’

Justin previously said that the upcoming shows on his 130-date tour will be canceled due to a “non-Covid related illness.”

‘Can’t believe I’m saying this,’ he wrote at the time. I’ve tried everything to get better, but my illness is worsening.

‘It pains my heart that I will have to cancel these next few shows’ (doctors orders). I love you all very much, and I’m going to relax and get better.’

Justin went on to say that he was performing facial exercises to recover the feeling in his face and that he was eager to come back to full health.

Ramsay Hunt syndrome – Everything You Need to Know

First of all Ramsay Hunt syndrome is a viral disease and not a disease related to tumors. It is caused by herpes zoster oticus, the same virus which causes chickenpox.

When the herpes virus affects the facial nerve near one of your ears, you get Ramsay Hunt syndrome. Herpes zoster virus, in addition to the painful chickenpox rash, can induce facial paralysis and hearing loss in the infected ear. According to an NCBI study, Less than 1% (5 per 100,000 people per year) of zoster, cases involve the facial nerve and result in Ramsay Hunt syndrome.

The virus remains in your nerves even after the chickenpox has healed. It may reactivate years later. When this happens, it might have an impact on your facial nerves. Justin Bieber should have been affected by Herpes in his childhood and developed chickenpox.

Treatment of Ramsay Hunt syndrome as soon as possible might lessen the risk of sequelae, which can include irreversible facial muscle paralysis and hearing.

Face symptoms on the affected side are, 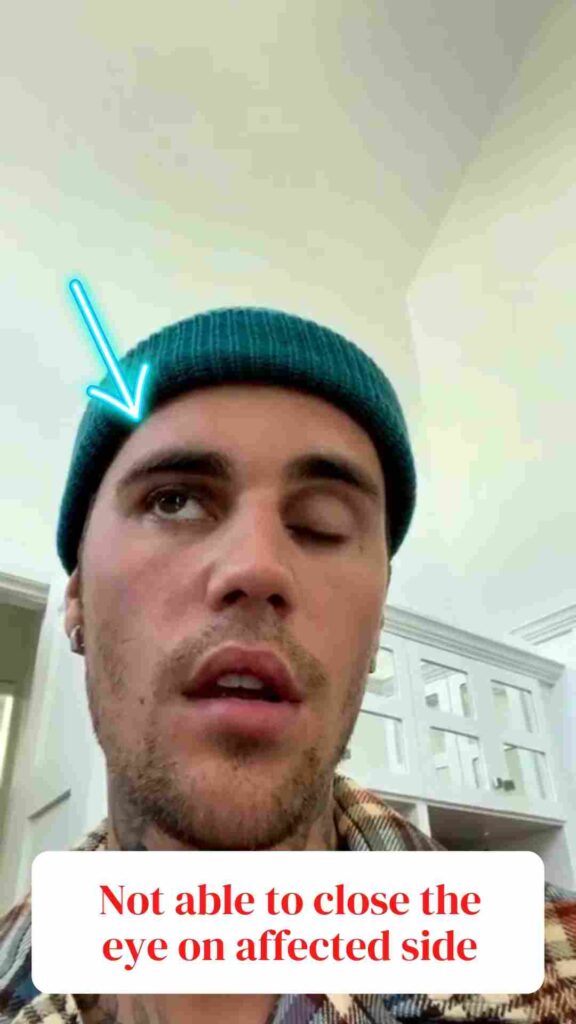 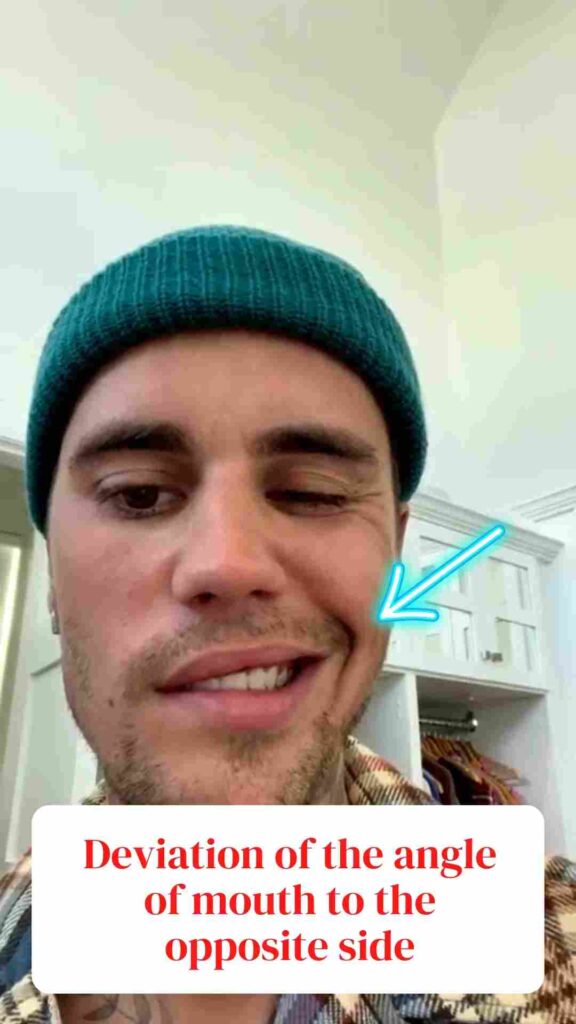 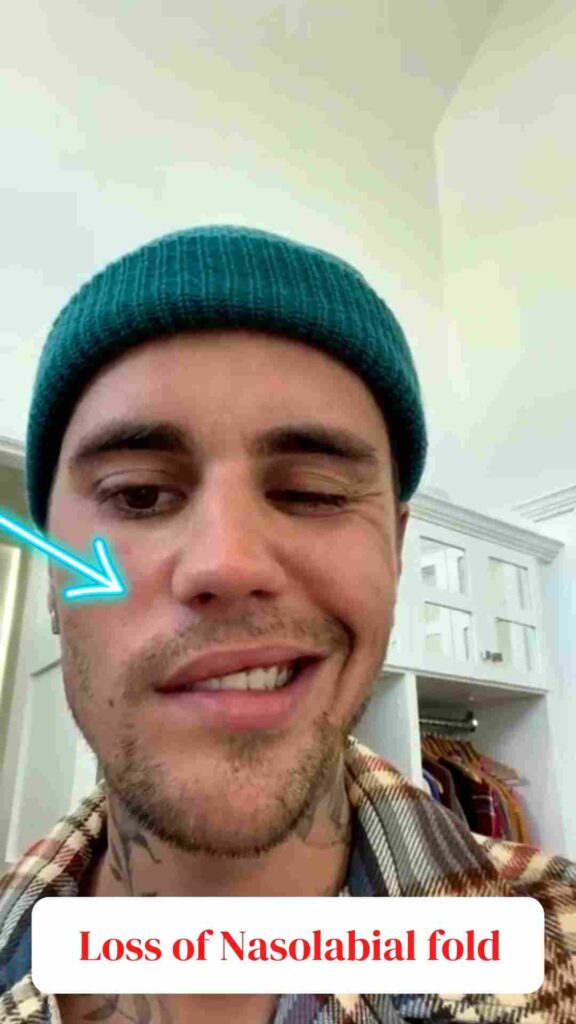 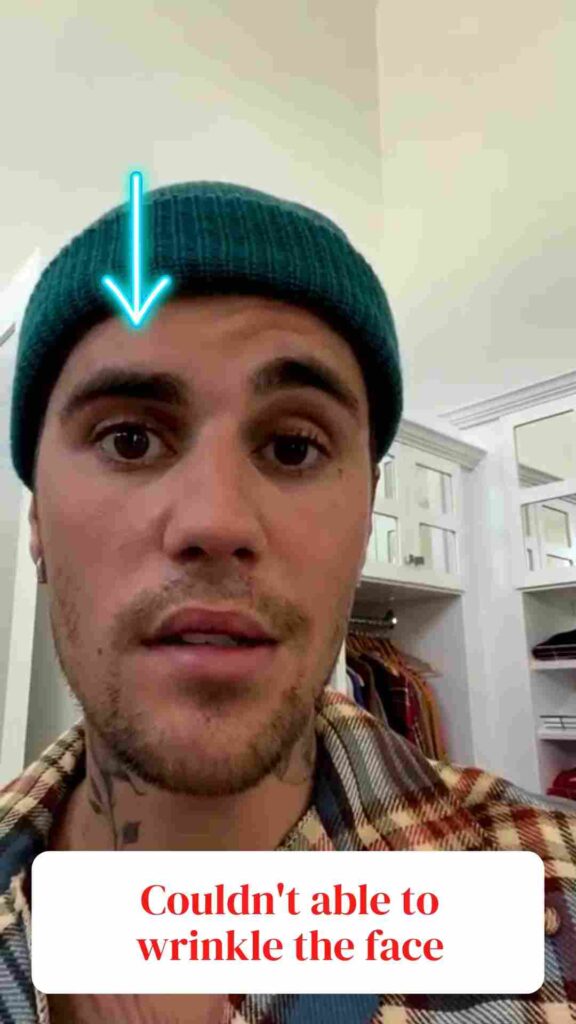 Justin Bieber showed all of his symptoms on his face in an Instagram video, but he made no mention of any ear symptoms.

Bells phenomenon is the typical sign of Ramsay Hunt syndrome. Let’s see what is this phenomenon. You probably observed Justin Bieber make a distinct mix of eyeball movements in his video, which is known as the Bells phenomenon.

Simply said, when you close your eye, your eyeball moves upwards, which you cannot see since your eyelids close the eye. However, because patients with facial nerve palsy are unable to close the eyelid on the affected side, you can very well see the movement of the eyeball. 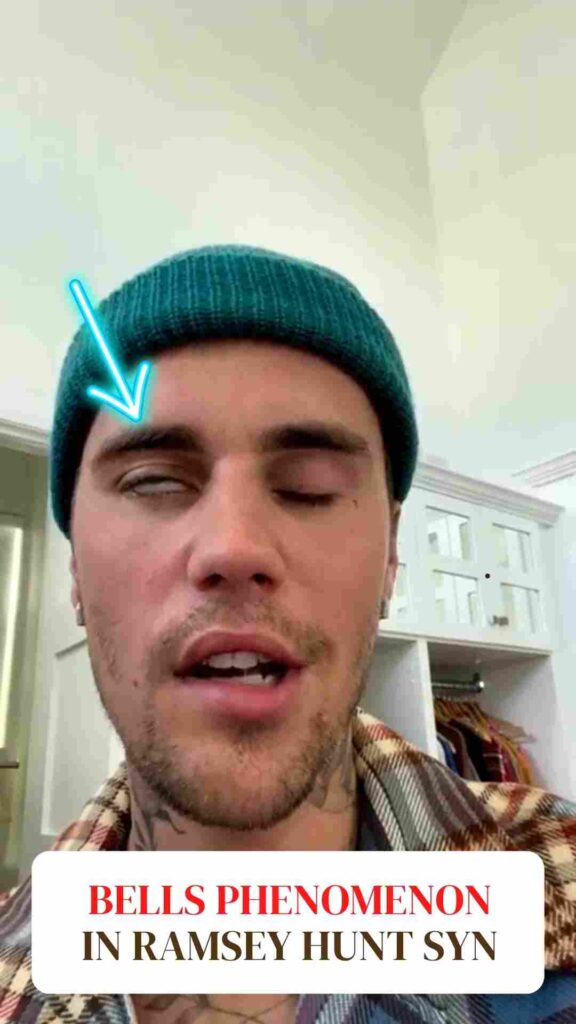 Ramsay Hunt syndrome is a condition that affects persons who have had chickenpox. The virus remains in your body after you recover from chickenpox, possibly reactivating in later years to create shingles, a painful rash with fluid-filled blisters.

Ramsay Hunt syndrome is a kind of shingles that affects the facial nerve near one of your ears. It is also capable of causing one-sided facial paralysis and hearing loss.

Ramsay Hunt syndrome does not spread. Reactivation of the chickenpox virus, on the other hand, can induce chickenpox in persons who have never had chickenpox or been vaccinated against it. For patients with compromised immune systems, the illness can be deadly.

Avoid direct contact with the following items until the rash blisters scab over:

Eye injury, You may find it difficult to close your eyelids due to the facial paralysis produced by Ramsay Hunt syndrome. This might cause damage to the cornea, which protects your eye. Eye pain and blurred vision can result from this injury.

Herpetic neuralgia, When a shingles virus affects nerve fibers, this agonizing disease develops. These nerve fibers’ signals become jumbled and amplified, resulting in pain that may continue long after the other signs and symptoms of the disease have disappeared.

Ramsay Hunt syndrome is frequently identified by doctors based on medical history, a physical exam, and the disorder’s particular signs and symptoms. Your doctor may extract a sample of fluid from one of the rash blisters in your ear for testing to confirm the diagnosis.

Treatment as soon as possible can relieve pain and reduce the risk of long-term consequences. Medications may include the following:

Can Justin Bieber Recover from his weakness?

Ramsay hunt syndrome recovery rate: As per the NCBI study, 70% of Patients who developed facial nerve palsy as a result of Ramsay Hunt Syndrome will be regaining normal or near-normal facial function. Also, the rate of development of facial synkinesis is about 40% after Ramsay Hunt syndrome.

0
Reply
How did Hilary Devey die? Dragons' Den Star Cause of death Explained