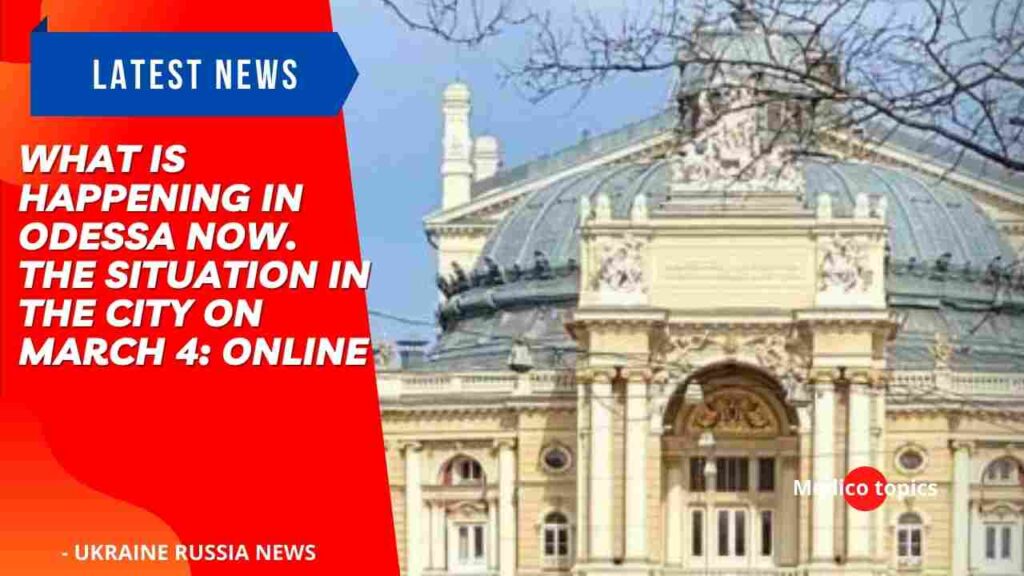 What is happening in Odessa now: Russia’s war against Ukraine has been going on for nine days now. Odessa heroically keeps the defense, like all our other cities. From time to time, the occupiers want to break into Odessa from the sea, but they do not succeed thanks to the Armed Forces of Ukraine and territorial defense.

More information about what is happening in Odessa and the region now, all current information and important news for city residents – in the online text material Medico topics.

Opening hours of public transport – until 17:00

Odesgorelektrotrans reported that on March 4, 2022, 30 trams and 30 trolleybuses were brought to all routes.

15:23 Today, trains to Lviv and Uzhgorod depart from the Odessa railway station. The electric train to Lviv will depart at 19:00. Train to Uzhgorod – at 22:32. Everyone can take advantage of the opportunity to get there for free.

13:50 The Red Cross in the Odessa region has created a special account to which funds can be transferred to help the townspeople.

11:30 The mayor of Odessa, Gennady Trukhanov, in an interview with the correspondent of the French edition of Le Monde, said that there are “no difficulties” with food in the city.

“A lot of help comes from fraternal European countries. Businessmen who worked here give away all long-term storage products. Now all this is taken into account, bases of food stocks are being created,” he said.

07:30, according to the General Staff of the Armed Forces of Ukraine, the enemy continues to prepare for the landing of an amphibious assault in the areas of Zatoka, Chernomorsk.

Check the train schedule at the link .

The situation in Odessa and the region on March 4

According to the mayor Gennady Trukhanov, the Odessa authorities “improve the city’s defense capabilities every minute.”

“Today, the task is to make sure that every meter of Odessa land is under the control of Odessa residents: the Armed Forces of Ukraine, the police, territorial defense, and the citizens themselves. As for the life of the city, all utilities are working. In addition, we are constantly strengthening the warning system,” the mayor said.

Today, the air raid signal in the city is transmitted: by loudspeakers, the official website, telegram channel, television and radio channels, church bells. Notifications are carried out by district administrations and educational institutions.

As of March 4, in Odessa and the Odessa region, a curfew is in effect from 19:00 to 06:00. At this time, it is forbidden for people to be on the streets and in other public places without specially issued passes and certificates.

How public transport works in Odessa

Given the curfew, passenger transportation in Odessa is carried out according to the following schedule:

Some routes have been changed:

All operational and only verified news without Russian propaganda and fakes are in the Medico topics groups in Reddit. Join now!

I hope, I gave what you what to know about What is happening in Odessa now. The situation in the city in March.