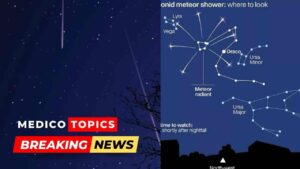 When will the Draconid meteor shower happen?

🔭 Tonight the Draconid meteor shower will reach it’s maximum, and is best seen in the evening just after nightfall

🌕 Be aware, the light from the Hunter’s moon may make it more difficult to see

Check out the forecast below to see where the best chance of viewing is 👇 pic.twitter.com/wrsibn2unb

This month will still have one more meteor shower. The Orionid meteor shower, which peaks between October 21 and 22, is just another meteor shower that can be seen till early November. The Hunter’s Moon, which is the first full moon of October, occurs at the same time as the meteor shower.

Even though the moon may be brighter, the meteor shower will be well visible from places with low light pollution with binoculars or telescopes. The meteor showers will be seen all night long, becoming bright just after sunset.

What is a Draconid meteor shower?

Draconid shower also known as the Giacobinids is the recurring comet from the source 21P/Giacobini-Zinner’. The constellation Draco, from where the Draconids appear to have originated, is the origin of their name.

The Draconids are classified as an “occasional” shower by NASA because they are either in an outburst, have a sizable amount of meteors, or are so infrequent that a casual viewer would not detect them. When the parent comet is in our area, it pours down hundreds of meteors an hour.

Draconid’s most recent occurrence occurred in 2018. Considering the comet’s 6.6-year orbit, a strong shower is not anticipated. However, there can also be some pleasant surprises. A meteor’s brightness is influenced by both its size and speed.

Generally, the Draconids are a weaker and slower shower. They travel slowly with a speed of 40,000 mph, according to NASA, which contributes to their faintness.

The majority of space pebbles will burn up in the Earth’s atmosphere, but those that launch from the Draco the Dragon constellation might fill the night sky with thousands of blazing stars during the meteor storm.

Where to see Draconid’s meteor shower?

According to EarthSky, in ideal dark-sky circumstances, you could be able to view up to 10 Draconid meteors every hour. Even if the full moon makes viewing circumstances less than ideal, it might still be worthwhile to attempt to see some of the dragon’s fire because there have been years when hundreds of Draconids have been observed in a single hour. Tonight, it is expected to see Jupiter’s bright light too.

Find a dark area and bend or lie back to get the widest possible view of the sky to witness the Draconids or any other meteor shower. It will take your eyes about 30 minutes to become used to the dark.

People’s reaction to the Meteor shower on social media

If you live in the northern hemisphere, you’ll be rewarded for keeping your eyes to the skies in October, as the Draconid Meteor Shower can be seen between Oct. 6th & 10th.

Granny Moon tweeted,
The Draconid Shower is also called the Giacobinids. Watch for the short-lived Draconid meteor shower at nightfall and early evening on Oct 8, 2022. But in 2022, the full or nearly Full Moon is in the way.

How did Stacey Jones die? UAFS veteran cause of death Explained