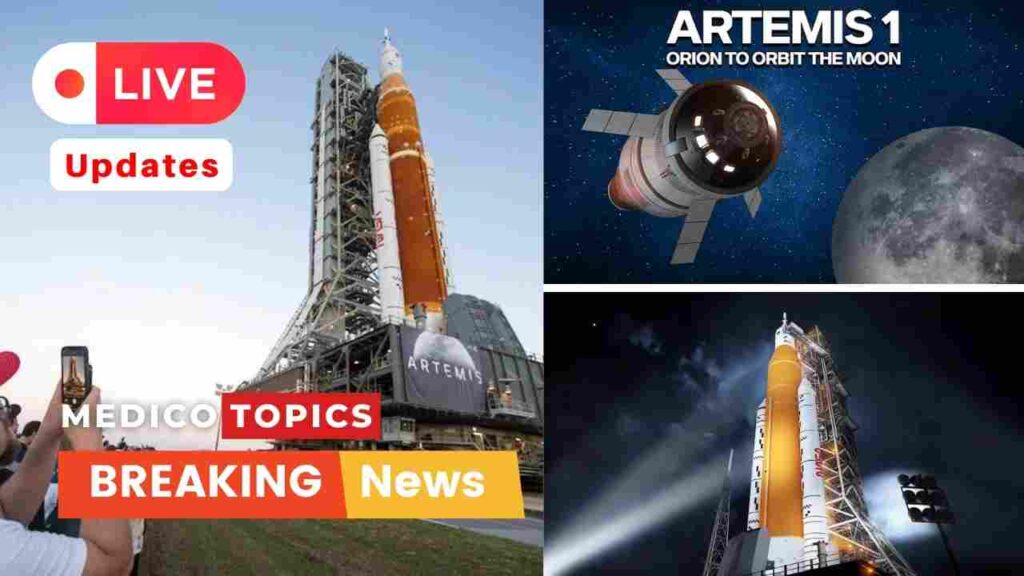 Engineers started preparing the Artemis 1 Space Launch System moon rocket for launch on Monday for a long-overdue test flight to send an unarmed Orion capsule on a 42-day journey around the moon. This preparation came after months of tests, troubleshooting, and repairs. Let’s see about Artemis 1, and a simple guide in detail

The new NASA moon program is on track to break all kinds of human spaceflight records. 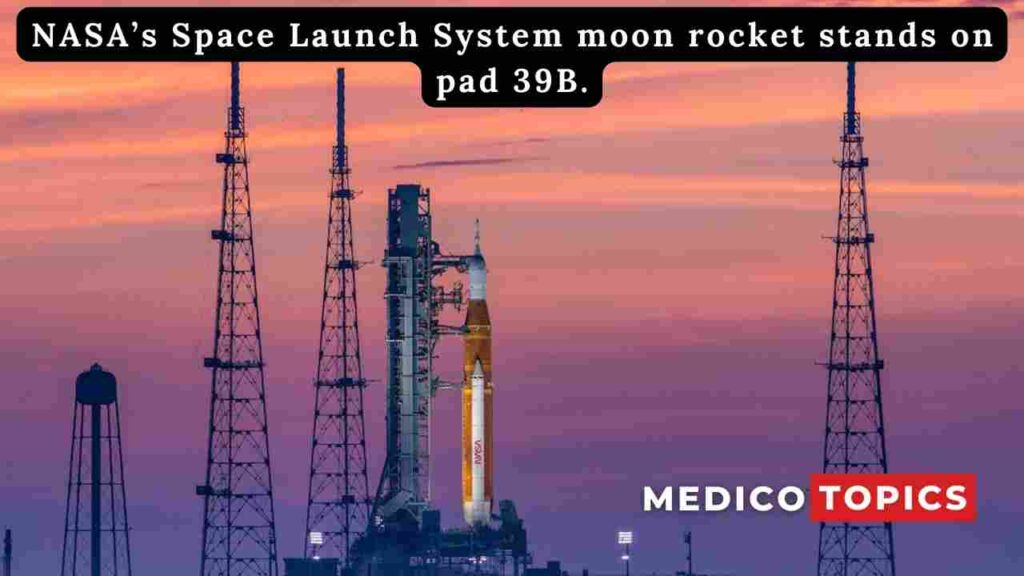 This project, which is named after Apollo’s twin sister, the Greek goddess Artemis, will send a woman and a person of color to the moon for the first time. If everything goes according to plan, these astronauts will be the first people since Gene Cernan and Harrison Schmitt of Apollo 17 to walk on the lunar regolith (also known as the dusty moon dirt) in 2025. The Artemis program will also build the first permanent human settlement on the moon by launching a space station into orbit and setting up a base camp there.  These steps will prepare the way for a future first that will involve sending astronauts to Mars.

However, before all of that can happen, the space agency needs to test its tools with a voyage called Artemis 1 that will set new records. Here is all you need to know about the program generating headlines across the world as NASA’s enormous Space Launch System (SLS) rocket prepares to launch this historic mission.

Running years behind plan and billions over budget, the first Space Launch System — SLS — rocket is finally prepared for blastoff from pad 39B at the Kennedy Space Center at 8:33 a.m. EDT Monday, the opening of a two-hour window. Forecasters are predicting a 70% chance of good weather. Backup launch opportunities are available on September 2 and 5 based on the planned orbit and the ever-changing positions of the Earth and moon. After that, the flight likely would slip into October.

NASA is set to make a record once again on August 29 when it will launch the Artemis I mission to the moon almost 50 years after the last Apollo mission that took humanity to the Moon. The mission is scheduled to launch during a launch window that begins at 6.03 PM IST on August 29.

The Orion spacecraft, which will one day orbit the moon and bring human crew members there, will be put to the test during the 42-day Artemis 1 mission. With September 2 and September 5 as backup options, the unmanned mission will launch from Cape Canaveral, Florida, no sooner than August 29 at 8:33 a.m. Eastern time. Orion will enter the atmosphere in Earth’s orbit and then launch into space using the Interim Cryogenic Propulsion Stage (ICPS), a 45-foot-long, cylinder-shaped vehicle with a single engine. A servicing module provided by the European Space Agency will make any necessary course corrections as Orion glides toward the moon. In lunar orbit, the spacecraft will make up to one and a half rotations, breaking the previous record for the most distance covered by a crew-carrying spacecraft. The moon’s gravity will then help accelerate it back toward Earth at precisely the appropriate moment after it has fired its engines. On October 10, the Orion spacecraft will fly back into our atmosphere at a speed of 6.8 miles per second, the fastest reentry of any human spacecraft.

NASA cannot artificially duplicate these circumstances on Earth, therefore the craft and its heat shield will have to withstand temperatures of 5,000 degrees Fahrenheit, according to Gizmodo’s George Dvorsky.  Orion will splash down in the Pacific Ocean off the coast of San Diego if it survives, given a U.S. Navy ship that will rescue the spacecraft.

The most powerful rocket is SLS.

There is no doubt that the SLS is the most potent rocket ever created. It stands at 32 stories high and is almost 6 million pounds in weight. The rocket’s orange core stage was produced by Boeing, while the engines and boosters were built by Aerojet Rocketdyne and Northrop Grumman, respectively, under a contract with NASA. Some criticized the project’s cost of $23.8 billion as being excessively high. 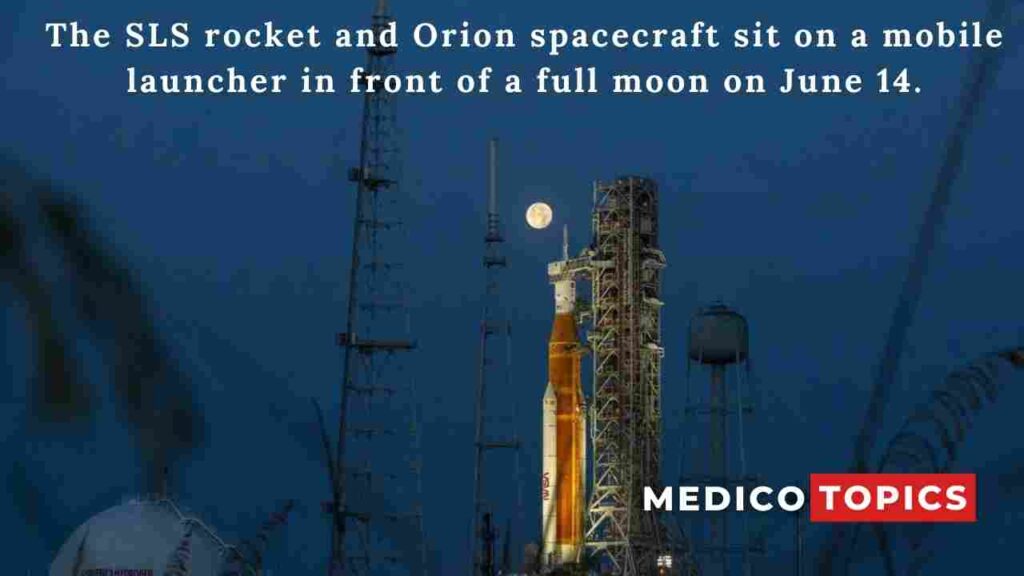 The SLS rocket stands 322 feet tall and will weigh 5.75 million pounds after 750,000 gallons of supercold liquid oxygen and hydrogen rocket fuel are pumped aboard early on Monday. It was cobbled together from leftover space shuttle components, a new core stage, and a modified upper stage borrowed from another rocket. (The NASA SLS Reference Guide has further information.) When the SLS lifts off, four hydrogen-fueled engines from the shuttle era and twin solid rocket boosters with 25% more propellant than their shuttle predecessors will produce a ground-shaking 8.8 million pounds of thrust, providing a breathtaking display for thousands of spaceport employees, locals, and visitors.

NASA Administrator Bill Nelson told CBS News, “I’m worried people think it’s routine.” After the candles go out, things are anything but ordinary. It is an entire high-wire act. This is crucial. And it is lovely. It’s a monster, too! Simply put, the size overwhelms you.

Science contribution behind this mission

Three mannequins will venture into outer space on Artemis 1, even though no humans will fly on it. Their goal is to determine whether future astronauts can safely occupy the Orion spacecraft. According to Paola Rosa-Aquino of Insider, Commander Moonikin Campos, a test subject wearing the Orion Crew Survival System spacesuit, will be in the front of the capsule.

The acceleration, vibration, and radiation that the Moonkin is subjected to will be measured by sensors, providing NASA with information about how its human crew members may suffer. The effects of space radiation on a woman’s body will be evaluated using the other two mannequins, Zohar and Helga. The dummies are constructed from plastic slices that represent soft tissue, bones, and lungs. Each will have 5,600 sensors that will keep track of the effects of radiation on the lungs, stomach, uterus, and bone marrow. Helga won’t be wearing a protective vest, but Zohar will.

This research is essential as NASA gets ready to send the first woman to the moon. Ramona Gaza, science team leader at NASA’s Johnson Space Center, stated in a news briefing that “women, in general, have a higher risk of acquiring cancer as they have more radiation-sensitive organs such as breast tissue and ovaries.”

Ten CubeSats, or tiny satellites about the size of a shoebox, will also be carried by Artemis 1. After launching Orion into orbit, the ICPS will separate from the spacecraft and place these satellites at three different positions between Earth and the moon. One of these CubeSats will go to a nearby asteroid using a solar sail so that it can take pictures of it. A different one has yeast in it to test how space radiation affects living things. The other CubeSats will do additional research, test airbags in a lunar crash landing, image the moon and the spacecraft, scan the moon using a spectrometer, and examine lunar ice.

When and where to watch ARTEMIS-1 LAUNCH?

The virginal launch of the spacecraft is being targeted in a two-hour launch window on August 29. The lift-off is currently scheduled for 8:33 a.m. EDT or 6:00 pm IST on Monday. The mission, which is a trial flight, is aimed at establishing the ability of the rocket to deliver. You can follow all the development related to the maiden launch of the Space Launch System to the Moon at indiatoday. in as we bring to you all the details of the mission. A live telecast of the mission is below from Nasa with the footage as and when it happens.

What next after Artemis?

Following the completion of the Artemis 1 mission, astronauts will return to the moon for the Artemis 2 and Artemis 3 missions. Artemis 2 will take a human crew on a lunar flyby after this initial test mission, entering the moon’s orbit and returning in eight to ten days. The mission will currently launch in 2024. If all goes as planned, Artemis 3 might happen as soon as 2025. For the first time in more than 50 years, a crew of astronauts will go to the moon’s surface during this mission. According to Meghan Bartels of Space.com, NASA this week revealed 13 potential areas for the Artemis 3 astronauts to land on the moon and explore.

All are located close to the lunar south pole, where scientists are focusing their studies. Scientists think frozen water may be present below the surface in the arctic region’s perpetually dark and chilly atmosphere.

Depending on the launch date, one of these locations will be the final stop. The NASA “Moon to Mars” plan, which aims to make the moon a stopover for humans on longer space voyages, is just getting started with the Artemis program. The lunar Gateway, an outpost orbiting the moon that will be built in space and support further exploration, will be established by Artemis.

The establishment of a lunar base camp by NASA will allow astronauts to reside there while on extended missions and test exploration techniques that might be used on Mars. Within 20 years, astronauts could be setting foot on Mars by building on Artemis’ accomplishments.

According to NASA’s deputy associate administrator Cathy Koerner, “everything we’re doing on the lunar surface, we’re doing to investigate for science.” We’re not just aiming for “flags and footprints,” as some people have described [Apollo], but also to test out every mechanism that would eventually be required to lower risks for a human mission to Mars.

NASA has postponed the launch of the Artemis 1 mission due to a malfunctioning core stage engine.

The Space Flight System (SLS) rocket’s RS-25 engine issue has caused NASA’s Artemis 1 launch to be delayed. To condition the engine before launch, it was supposed to be bled with liquid hydrogen and oxygen, however, team engineers discovered that one of the engines was not bled as planned. The following window for launches is on Friday, September 2.

The unmanned Artemis I mission is the first in a line of more difficult Moon missions that will eventually return people to the sole satellite of Earth. NASA will demonstrate the Space Launch System (SLS), its most potent launch vehicle to date, as well as the Orion crew capsule’s performance and capabilities during the trip. SLS and Orion will travel approximately 65,000 kilometers to the Moon and back throughout the mission’s six-week duration.

The most recent mission status updates will be given below.

#Artemis I update: Launch is currently in an unplanned hold as the team works on an issue with engine number 3 on the @NASA_SLS core stage. Operations commentary continues at https://t.co/z1RgZwQkWS https://t.co/mFyoeRMC6q

The countdown clock is on a hold at T-40 minutes. The hydrogen team of the @NASA_SLS rocket is discussing plans with the #Artemis I launch director. Operational commentary continues at https://t.co/z1RgZwQkWS. pic.twitter.com/5J6rHVCe44

Why did Yoo Joo-eun commit suicide? Cause of death Revealed