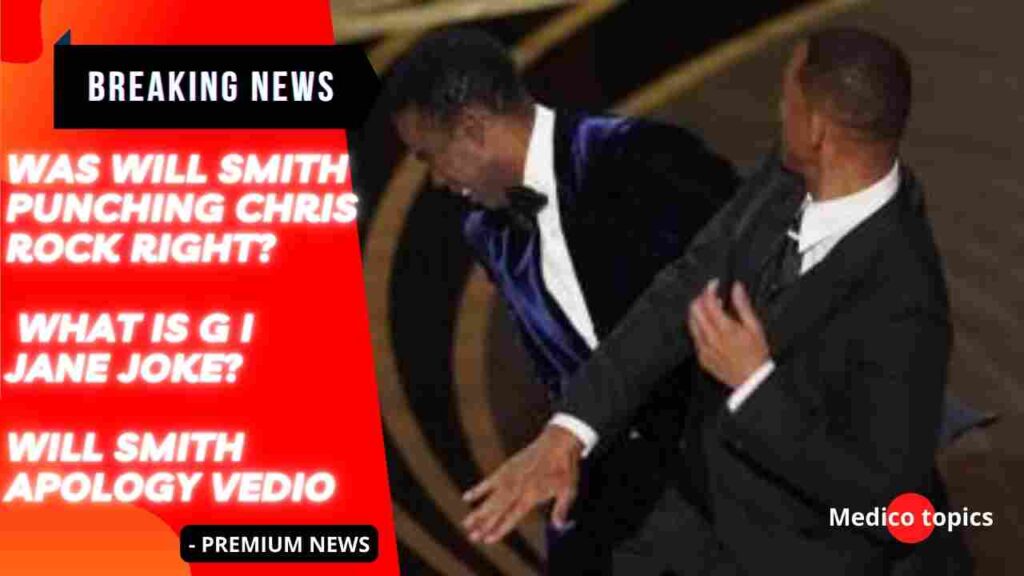 Was Will Smith punching Chris Rock Right? Will Smith punched stand-up comedian Chris Rock in the face for making fun of his wife Jada Pinkett Smith’s appearance in a joke. The incident occurred during the 94th Academy Awards screening at the Dolby Theater in Los Angeles.

“Jada, I love you,” Chris Rock said on stage as he accepted the award for best documentary. “I can’t wait to see you, GI Jane 2.” A reference to Jada’s baldness as a result of alopecia. Smith was so enraged by the remark that he stormed onto the stage and punched the comedian.

“Keep my wife’s name out of your f**king mouth,” the ‘King Richard’ star yelled after returning to his seat. Timothy Burke, a popular Twitter user, shared a video of the altercation.

What is G I Jane Joke?

G.I. Jane is a 1997 film starring Demi Moore as Jordan O’Neil. O’Neil is the first woman to go through Navy Seal training, and she outlives many of her male counterparts after enduring the grueling Seal training. O’Neil deprives herself of her femininity to strengthen her position as a Seal. Moore shaves her head to become the “G.I. Jane” referred to in the title.

So, what did Chris Rock tell Will Smith about Jada Pinkett Smith and the 1997 film? According to Decider, Rock was presenting on stage at the Oscars 2022 when he joked that Smith could play the next lead in G.I. Jane. He said this because Pinkett Smith is currently sporting a bald hairstyle as a result of her alopecia. This resulted in Smith’s infamous on-stage slap of the comedian.

Jada Pinkett Smith has previously spoken about her alopecia.

Jada Pinkett Smith mentioned her alopecia before Chris Rock and Will Smith’s altercation and the G.I. Jane debacle. According to Billboard, Pinkett Smith posted a video on Instagram in December 2021 saying she was starting to embrace the disorder that causes hair loss.

The video, which Pinkett Smith posted on Instagram, shows her fingers through her hair at the time, drawing attention to the balding areas. “Y’all know I’ve been dealing with alopecia, and then one day, look at this line right here. “Take a look at that,” she said.

“So it just appeared like that, and this is going to be a little more difficult for me to hide,” she explained. “So I figured I’d just share it so no one asks any questions.”

“Mama’s going to have to take it down to the scalp so nobody thinks she got brain surgery or something,” Pinkett Smith wrote in the caption of the post. I’m going to be friends with this alopecia for the rest of my life!”

According to Us Weekly, Rock publicly mocked Pinkett Smith for boycotting the Oscars in 2016. She was boycotting the event because of the nominees’ lack of diversity.

Rock joked at the time, “Jada said she’s not coming.” “I thought, ‘Isn’t she on a TV show?'” Is Jada going to skip the Oscars? Jada’s boycott of the Oscars is akin to my boycott of Rihanna’s pants. “I didn’t get invited!”

And if Will had just told Rock to STFU or better yet, tweet about it or call him out on TV the next day, you’d have a point. But instead, he physically assaulted someone during the Oscars, which despite its decline in popularity, is still the most prestigious award ceremony for his industry. All for an insult.

Shows all kinds of lapses in judgment and was completely disproportional to the offending remark.