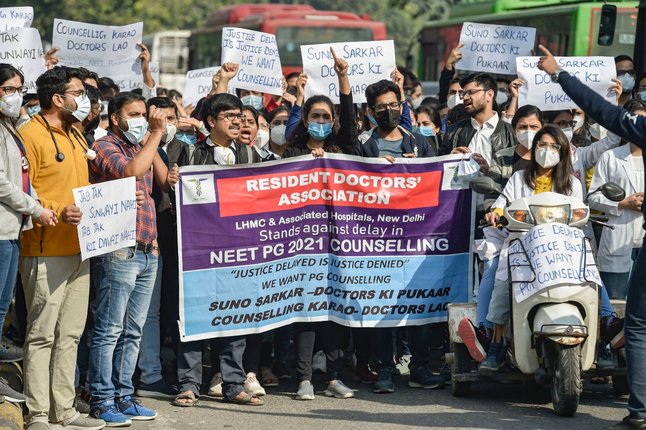 Around 5,000 resident physicians in Delhi will resume their protest on Friday, December 17, 2021, in protest of the NEET postgraduate counselling procedure being delayed.

Residents at Delhi’s three government-run hospitals continued their protest on Friday, boycotting all services, including emergency, over the NEET-PG 2021 counselling delay, after a brief respite.

Residents at the Ram Manohar Lohia, Safdarjung, and Lady Hardinge hospitals announced that their strike will resume because the government had made a “false promise.”

They cited a “acute scarcity” of resident doctors throughout the country, citing the fact that NEET PG 2021 batch counselling has already been postponed by eight months.

Following the health ministry’s commitment to accelerate court hearings and, as a result, fast-track the counselling process, resident physicians announced on December 9 that the agitation, organized by the Federation of Resident Doctor’s Association (FORDA), would be suspended for a week.

FORDA, on the other hand, has told Union Health Minister Mansukh Mandaviya that the protest will resume on Wednesday.

“It appears that the pain of overworked and weary resident physicians went unnoticed by authorities, who are unconcerned with the scarcity of healthcare workers caused by the refusal of new resident doctors to be admitted.”

“With a third COVID-19 wave on the horizon, the authorities should have done more to expedite the counselling and subsequent admissions process – instead, there is inertia and a lack of urgency on the problem.” As a result, beginning December 17, 2021, resident doctors will be required to withdraw from all services (regular and emergency) at healthcare institutions. The government has responsibility for this regrettable scenario hurting healthcare services, according to FORDA’s message.

In a letter sent on Wednesday, the Resident Doctors’ Association at Safdarjung Hospital said that they had been waiting patiently since the agitation was put on pause.

“However, the ministry has taken no action in the previous week, in sharp contrast to its bogus pledges and deceitful guarantees,” the letter said.