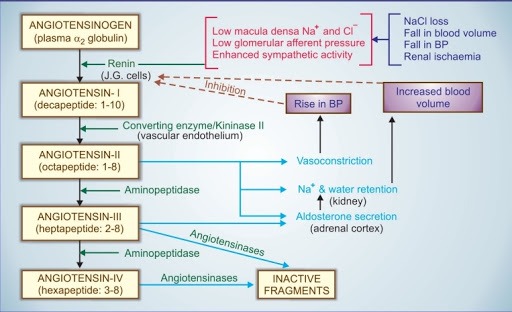 The amount of renin in plasma acts as the limiting factor for Angiotensin II generation. The plasma t½ of renin is 15 mins. It converts Angiotensinogen to Angiotensin I and The biological potency of Ang I is only 1/100  that of Ang II, but it is rapidly converted into Angiotensin  II by ACE which is a dipeptidyl carboxypeptidase. Circulating Ang II has a short t½ (1 min). The first degradation product from Angiotensin II is Angiotensin III and the second product produced is IV. Both this transformation is by Aminopeptidases. Angiotensinases converts Ang III and Ang IV to Inactive fragments

(concentration of prorenin and renin in circulation = 5 to 10 : 1 )  Prorenin is activated by Enzymatically and Non-enzymatically.

Enzymatic activation – proteases like proconvertase-1 and Cathepsin B cut off the ‘propeptide’ to produce renin. This makes catalytic exposion of renin. This is a irreversible activation. 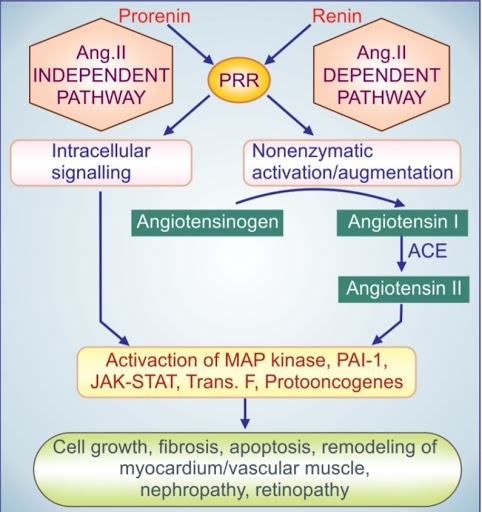 2. Blood volume, pressure and electrolyte hemostasis:
Changes that lower blood volume or blood pressure, or decrease Na+ content induce renin release by three mechanisms.
Continues release of Renin leads to an increase in Angiotensin II this inturn cause rise in BP by Vasoconstriction and also causes Na+ and water retention. Then renin release is decreased internally by