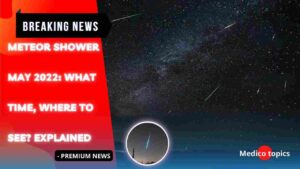 When To Look For 1000 Shooting Stars In The Sky During The Tau Herculids Meteor Shower 2022. Let’s see Meteor Shower May 2022: What time, and where to see it.

What is Meteor Shower?

When the Earth travels through the debris trail left by a comet or asteroid, a meteor shower ensues. Meteors are shards of rock and ice ejected by comets as they travel around the sun. A meteorite is a meteor that reaches the earth’s surface.

The constellation in which a meteor shower’s radiant is located gives the shower its name. Perseids is derived from Perseus, hence the name. Comets continue to discharge material as they orbit the sun, replenishing the shower meteoroids.

Each year, approximately 30 meteor showers are visible to observers on Earth. Some of these showers have existed for over a century. For example, the Perseid meteor shower, which happens every year in August, was first noticed and documented in Chinese chronicles some 2000 years ago.

Meteors can leave red, yellow, or green trails behind them. The colors come from the ionization of molecules, such as oxygen, which appears green. A fireball is a meteor with a brightness greater than Venus. According to radar, there are 12,000 meteors the size of a grain of sand on any given night. The International Space Station is protected from meteorites up to an inch in diameter via shielding.

How many times has the Meteor Shower happened?

Stargazers in North and South America may be treated to a “surprise” meteor shower on Tuesday, May 31, courtesy of a comet that split off 27 years ago and is still disintegrating.

If the conditions are just right when Earth passes through a concentrated stream of frozen particles left behind by this comet, a “meteor storm” could occur, a phenomenon not witnessed since the early 2000s.

“Meteor showers are notoriously temperamental, but we’ve been waiting for anything like this for a long time,” said Hayden Planetarium Associate Joe Rao, who released research about the probable event in the Journal of the Royal Astronomical Society of Canada last year.

The position and speed of the larger particles that broke off from the comet will determine whether this continuous disintegration will result in a spectacular shower, which has yet to be named. A meteor outburst could occur if these gravel-sized particles arrive ahead of the comet. Viewers are unlikely to notice anything if they aren’t moving fast enough to be in this position.

The Sun was orbited every 5.4 years by the comet SW3, which was detected in 1930. The two German observers that discovered it was Arnold Schwassmann and Arno Arthur Wachmann. The comet was last seen in the 1970s.

The comet became 600 times brighter after 1995, and by 2006, scientists had discovered that it had fragmented into about 70 pieces, creating its own cloud dust tail.

It has now broken down into even more fragments, with astronomers estimating that the debris will approach the Earth’s atmosphere at a speed of 10 miles per second. The meteor shower would occur at the end of May 2022 as a result of this.

This time, the Tau Herculids Meteor Shower is likely to be visible on Earth. Find out what causes this meteor shower, when you can see 1000 shooting stars in the sky, and where to look here.

OMG! This meteor shower might be the biggest night sky event of your lifetime! Or not. Read about the Tau Herculids, coming up the night of May 30-31 …https://t.co/DD1bKHCRDx pic.twitter.com/GGGhjo7HOO

The upcoming Tau Herculids meteor shower, according to NASA, might be one of the brightest in the sky this year. Take a look at the video below, which was provided by NASA.

When did you see Meteor Shower?

The peak viewing period on the East Coast is predicted to be 1 a.m. on Tuesday, May 31. The new moon occurs the day before, on May 30, resulting in the dark sky. Anyone interested in seeing this probable event should seek out a location away from strong lights, according to Rao.

“It’s possible that nothing will happen at the scheduled time,” Rao remarked. “But all we can do now is go outside, stare up at the sky, and hope that nature is in a show-off mood.” However, there’s a potential that you won’t be able to observe this meteor shower at all. However, if seen, it would be the finest.

Bill Cooke, the chief of NASA’s Marshall Space Flight Center’s Meteoroid Environment Office in Huntsville, Alabama, said that the impending meteor shower would be an ‘all or nothing event,’ as it would produce a spectacular display from May 30 evening to May 31 morning. The meteor shower will also be visible to the unaided eye.

What happened to Eduardo Valseca? Why was he kidnapped? Explained