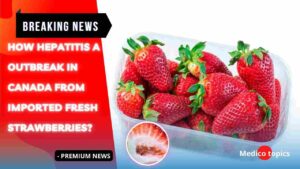 How Hepatitis A Outbreak from imported fresh strawberries

The Public Health Agency of Canada (PHAC) is working with provincial public health partners, the Canadian Food Inspection Agency (CFIA), and Health Canada to investigate a hepatitis A outbreak in Alberta and Saskatchewan.

These imported fresh organic strawberries were purchased in Co-op stores in Alberta and Saskatchewan between March 5 and 9, 2022, and are no longer accessible in Canada.

Throw away any remaining fresh organic strawberries purchased at Co-op stores in Alberta and Saskatchewan between March 5 and 9, 2022. Throw out the strawberries if you don’t know where they originated from.

If you suspect you’ve been exposed to these organic strawberries, or if you’re experiencing signs of hepatitis A, visit your doctor right once. If given within 14 days after exposure, vaccination can prevent hepatitis A infection.

Summary of the investigation

There are ten laboratory-confirmed cases of hepatitis A disease being investigated in two jurisdictions as of May 27, 2022: Alberta (4) and Saskatchewan (6). Between early and mid-April 2022, many were unwell. Individuals that were ill range in age from ten to seventy-five years old. Four people have been admitted to the hospital. There have been no deaths reported.

The CFIA is launching a food safety investigation into fresh organic strawberries purchased at Co-op stores in Alberta and Saskatchewan between March 5 and 9, 2022. There are currently no food recalls related to this epidemic. As the investigation progresses, we will be updating instant news.

Is Hepatitis A most dangerous?

Hepatitis A can affect anyone at any time. The majority of persons who have hepatitis A will recover completely, although the risk of significant consequences increases with age and in those who have underlying liver disease.

Some persons who are infected with hepatitis A may not become ill or show any symptoms, yet they can still spread the virus to others.

Infected people do not always show symptoms. Adults are more prone than children to experience symptoms. Hepatitis A symptoms include fever, urine that is dark in color, a decrease in appetite, exhaustion (tiredness), vomiting, nausea, abdominal discomfort or stomach cramps, a yellow tinge to the skin (yellowing of the skin and eyes)

Hepatitis A symptoms usually show 14 to 28 days after exposure, although they might appear up to 50 days later. Symptoms last about two months on average. Mild symptoms can continue for a week or two, whereas severe symptoms can last for up to nine months.

What should you do to safeguard your health?

Fresh organic strawberries purchased between March 5 and 9, 2022 from Co-op stores in Alberta and Saskatchewan should be in your freezer. Do not consume them if you put them in the freezer to eat later.

Any remaining organic strawberries should be thrown away. Throw out the strawberries if you don’t know where they originated from.

Wash and sterilize any drawers, shelves, or containers where the products were stored with a kitchen sanitizer (follow the directions on the container) or a bleach solution in a marked spray bottle (5 ml household bleach to 750 ml water) and rinse with water.

If you’ve eaten these organic strawberries that were bought fresh and then frozen, or if you’re experiencing signs of hepatitis A, visit your doctor right once. If given within 14 days after exposure, vaccination can prevent hepatitis A infection.

Before and after preparing or eating meals, as well as after using the restroom or changing diapers, wash your hands. Do not prepare or serve food or drinks to others if you have been diagnosed with hepatitis A.

What the Canadian government is doing?

The Canadian government is committed to keeping Canadians safe from enteric disease outbreaks.

The Public Health Agency of Canada leads the human health investigation into an outbreak and keeps in touch with its federal, provincial, and territory partners regularly to monitor the situation and work on outbreak response strategies.

Food-related health risk assessments are conducted by Health Canada to establish whether the presence of a substance or microbe constitutes a health concern to consumers. Food safety investigations are carried out by the Canadian Food Inspection Agency on the likely food source of an epidemic.

What happened to Eduardo Valseca? Why was he kidnapped? Explained

[…] How Hepatitis A Outbreak in Canada from imported fresh strawberries? […]