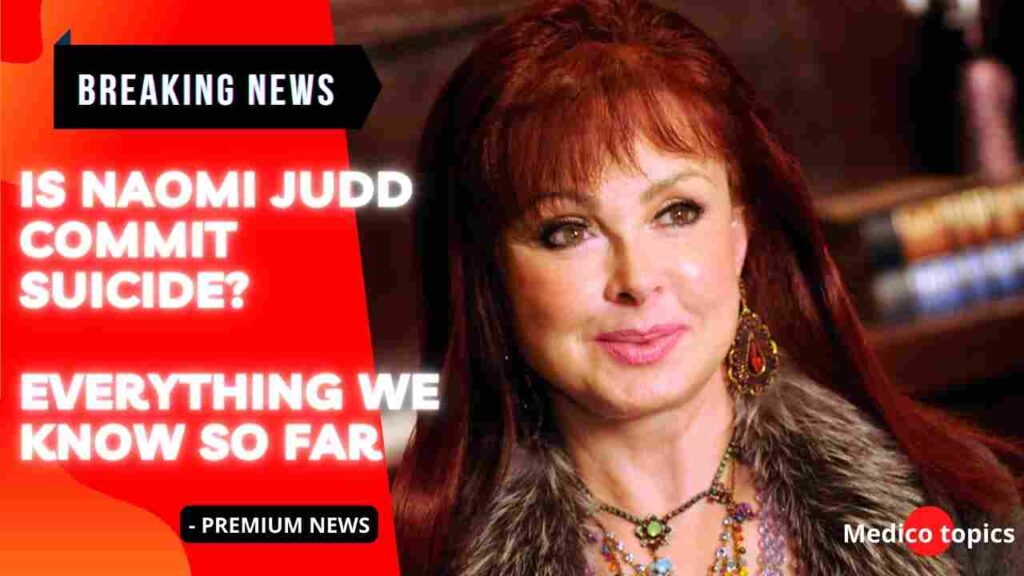 Naomi Judd, who died on Saturday at the age of 76 from “the disease of mental illness,” was open about her depression battle throughout her decades-long career. Let’s see Did Naomi Judd commit suicide.

What happened to Naomi Judd?

During an interview with “Good Morning America” in 2016, the “Love Can Build a Bridge” singer revealed that she was suffering from “extreme” and “severe” depression, which had rendered her housebound. Judd’s health deteriorated after she and daughter Wynonna ceased touring as The Judds in 2011.

“[Fans] see me in rhinestones, you know, with glitter in my hair, that’s really who I am,” she explained to Robin Roberts. “But then I’d come home and not leave the house for three weeks, not change out of my pajamas, and not practice normal hygiene.”   It was truly bad.

“When I got off the tour, I fell into this deep, dark, terrifying hole that I couldn’t get out of,” she admitted. “I sat on my couch for two years.”

In 2011 Naomi even admitted that she had seriously considered suicide at a bridge near her farm.

In 2016, Naomi published “River of Time: My Descent into Depression and How I Emerged with Hope,” in which she explained that she went public with her diagnosis — which was eventually treated with drugs and electroshock therapy — because she wanted people to understand that mental illness is “not a character flaw, it’s a stinking disease.”

Naomi’s daughters, Wynonna and Ashley, have also been open about their struggles with depression and anxiety throughout their respective Hollywood careers.

Wynonna, 57, told Page Six last year that she attempted suicide when she was 18 and still suffers from depression.

“I have moments where I think to myself, ‘This is too much,’ and then I call someone,” she explained. “I literally will call somebody because I’ve been stuck in my sadness where I didn’t and we have to reach out and that’s been the hardest thing for me because I’m not good at asking for help and that’s it,” she says.

Wynonna went on to say that she has “constant thoughts about how difficult this life is.”

“When you live on a farm, you think to yourself, ‘Oh, I could just jump in a lake.'” But then I realize I need to stay around for my grandchildren and continue to make music… “A mentor once told me, ‘Don’t leave until the miracle occurs,'” she explained.

The “Double Jeopardy” host, 54, revealed in 2006 that she had spent 47 days in a Texas treatment center for depression and other psychological trauma.

Naomi Judd Cause of death

Naomi Judd, the country music singer and half of the Grammy-winning duo The Judds, died at the age of 76 after a battle with mental illness.

Ashley Judd, her daughter, announced her mother’s death on Instagram on Saturday, saying she and her sister Wynonna were “shattered” by the news.

“Today was a tragic day for our sisters.” We had to say goodbye to our lovely mother due to the disease of mental illness. “We are broken,”.
“We are navigating profound grief, and we know that she was loved by her public as much as we loved her.”
“We’re in uncharted territory.”

Did Naomi Judd commit suicide, But there are no official statements claiming that Naomi Judd suicide herself due to her depressive disorder. She was most likely suicidal.

Naomi is survived by her two daughters and her husband of 32 years. 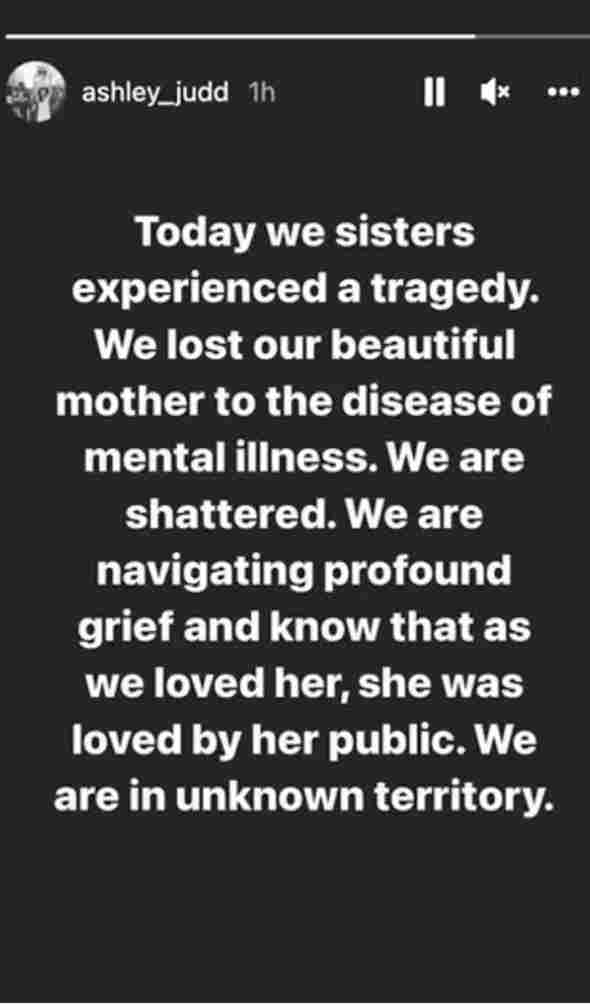 How did Naomi Judd die?

Naomi’s husband, Larry Strickland, a backup singer for Elvis Presley, told The Associated Press that his wife died near Nashville, Tennessee, and asked for privacy for their family during this difficult time.

There are no further details available about the 76-year-death, old’s which occurred just one day before she was to be inducted into the Country Music Hall of Fame and a few months before she was scheduled to perform again later this year.

Naomi and her daughter Wynonna Judd announced earlier this year that they would embark on a 10-city “Final Tour” beginning in September.

On Sunday, the duo was also set to be inducted into the Hall of Fame.

They reunited just two weeks ago for their first TV performance in over two decades, singing their classic 1990s hit “Love Can Build a Bridge” at the CMT Music Awards.

People confirmed it as a suicide. According to them, Naomi Judd, the legendary country singer and half of the mother-daughter duo The Judds, committed suicide on Saturday at the age of 76 after a lengthy struggle with mental illness, according to several sources.

Naomi was a longstanding advocate of mental health and penned an open letter for Mental Health Awareness Week in 2018, which she shared with PEOPLE exclusively.

“The inevitable question for anyone grieving the death of someone who committed suicide is, “Why did this happen?” We don’t have very good answers, unfortunately “At the time, the musician wrote. “Suicidal behaviour is known to be associated with a variety of behavioural brain disorders, including schizophrenia, bipolar disorder, and depression. Among these mental illnesses, suicide is one of the main causes of preventable death.”

“To better understand this issue, we must integrate suicide research into mainstream neuroscience and treat it like any other brain illness,” the note continued. “People who commit suicide have issues with mood, impulse control, and aggression, all of which are regulated by distinct circuits in the brain, but we still don’t know how these circuits go crazy in the brains of suicide victims.”

Carrie Underwood is among the country music fans paying tribute to Naomi Judd, who died suddenly on Saturday, April 30th, at the age of 76.

During her performance at the Stagecoach Festival in Indio, California, just hours after the devastating news of Judd’s death broke, Underwood asked fans to remember loved ones who have died along the way, according to People.

She went on to directly mention Judd’s death, discuss how it has affected the country music community, and then have her band begin her heartfelt song of loss, love, and faith, titled See You Again.

‘This next song is dedicated to everyone who has ever lost someone they loved, which is everyone,’ Underwood said in the prelude to See You Again.

Underwood then asked the audience to join forces by pulling out a phone or lighter and shining it in memory of those who had died.

‘Let’s light up this place in memory of all those we miss,’ the Inside Your Heaven star said, adding, ‘I know all of the country music will light something up for Ms. Naomi Judd.’

I loved Naomi Judd. Among her many talents, she was just so much fun, a great storyteller, and a wonderful spirit.

This is heartbreaking news! Naomi Judd was one of the sweetest people I’ve ever known. I had the honor of working with her in movies and numerous musical events. My deepest heartfelt condolences go out to her family.

My very deepest condolences to the family of Naomi Judd The story of her hard-fought rise with Wynonna and Ashley is absolutely remarkable. The Judds reunited to perform “Love Can Build a Bridge” with a choir at the CMT Music Awards 19 days ago. It was spell-binding. RIP

I am deeply saddened by the loss of my friend and fellow Kentuckian, Naomi Judd. Naomi was always so special to be with. She accomplished so much and she will be missed and loved forever. My prayers go out to Naomi and her family.

I’m very sad to hear that Naomi Judd has passed away. Rest In Peace. Sending love and light to Ashley and Wynonna and all who love her.

Depression (major depressive disorder) is a common and serious medical illness that has a negative impact on how you feel, think, and act. It is, thankfully, treatable. Depression causes feelings of sadness and/or a loss of interest in previously enjoyed activities.

It can cause a variety of emotional and physical problems, as well as a reduction in your ability to function at work and home. Depression symptoms can range from mild to severe and include the following:

[…] Did Naomi Judd commit suicide? Everything we know so far […]

0
Reply
Will Roe V Wade be overturned? What happens if it is overturned?

[…] Did Naomi Judd commit suicide? Everything we know so far […]