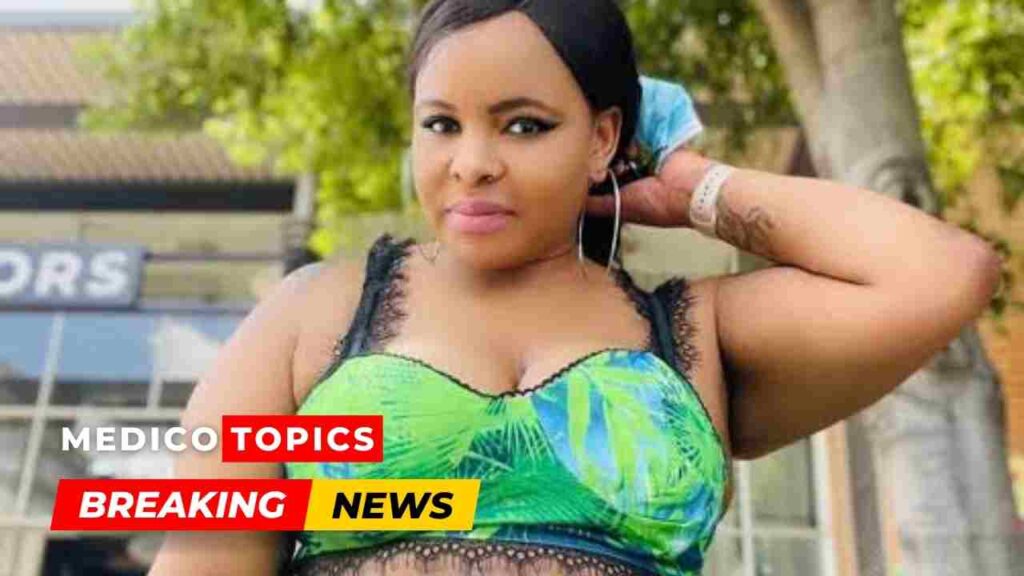 Dinkybliss, also known as Rethabile Potsane from BBMzansi, passed away on November 13, 2022, at Hillbrow Clinic in South Africa. Let’s see how Rethabile Potsane aka Dinky bliss died and her Cause of death in detail.

How did Dinky bliss die?

Rethabile Potsane, who is professionally known as Dinky bliss, suddenly passed away on November 13, 2022.
Dinky Bliss rose to fame after appearing on Big Brother Mzansi, one of South Africa’s most popular reality programs.

Entertainment Commentator and TV Host Phil Mphela first confirmed this on his Twitter page. By saying,

He also shared an Email received from the Dinky bliss family regarding her passing. The message reads,

It is with deep sadness that we share the news that Rethabile Potsane also known as Dinky bliss has passed away in the early hours of today at Hillbrow Clinic. More details will follow in due course. At the moment the family is still shocked & grieving. 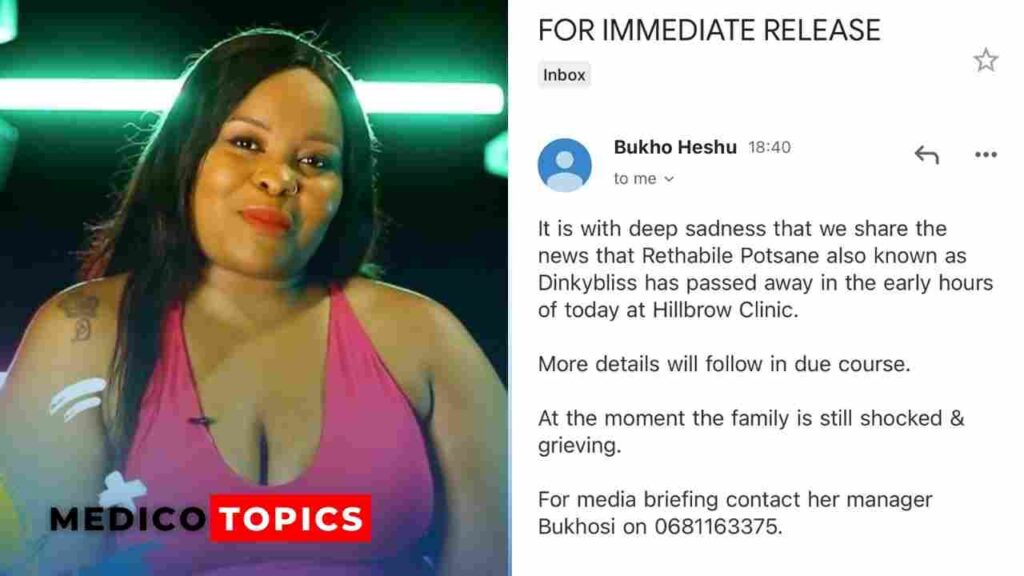 Unfortunately, she was among the first Big Brother Mzansi contestants to be booted from the competition.

Dinky bliss cause of death:

A South African journalist confirms the death of a former BBmzansi Season 3 housemate, Dinky bliss. Dinky bliss cause of death remains unknown. She passed away at Hillbrow clinic and her family is in total shock after the demise of Dinky bliss. She was in depression, according to her fans. However, it is not known whether her depression relates to her death.

He announced the passing of Dinky bliss on his social media.

UPDATE: Dinky bliss didn’t commit suicide, Phil Mphela confirmed on Twitter as the family confirmed him via Mail. He said,

There has been speculative tweets about Dinky’s passing.

Dinky did not commit suicide.

Yes Dinky was public about her depression struggles but please wait for the family to deal with the shock and details of her untimely demise will be shared. 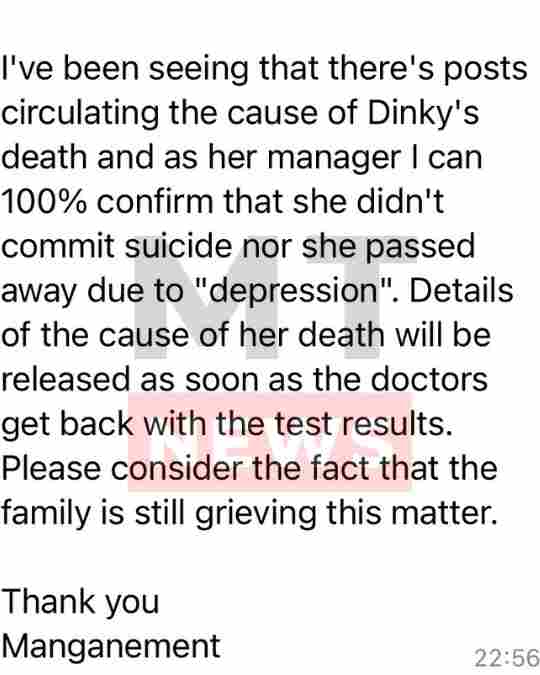 For the first time,

Back on April 29, She posted a video on Instagram and stated, “People call it attention seeking, and yes I am seeking urgent attention of help. I tried, I really tried”

Medico topics have been trying to reach out to the family and relatives for comment on the incident. So far no responses have been received. We will update the page once enough information is available. More details on Dinky bliss cause of death will be added soon.

Recently about her depression:

Dinky bliss suffered from depression. She opened up that she was battling depression for the past few days. She shared a story about her depression on her Instagram and fans reacted to it.

In April of this year, Dinky Bliss emotionally asked her followers to pray, saying that she is stressed and had not been able to sleep. She also explained how her child has kept her going through it all, adding that she hopes she won’t do anything harmful to herself. 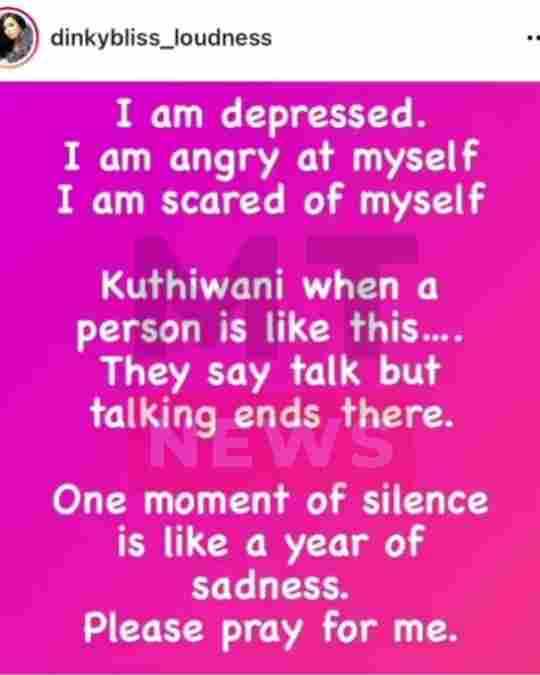 She gained hatred during releasing n#des of Terry Treasure

Taking to her Twitter page yesterday, Dinky Bliss, posted an n#de picture of Terry Treasure. Why she did isn’t known yet. She might have probably gotten it from her Only Fans account. But that didn’t work in her favor as SAns demanded that she pull the pic down.

The penalty for this offense may include a fine up to R300 000 or imprisonment for up to four years or both a fine and imprisonment. Hmmm, here’s how Tweeps reacted to her post.

Reactions from South Africans below:

One said, BBMzansi Dinky bliss really stooped that low…first after she was evicted she went for Nale and started saying horrible things about her now she is on Terry.

Another one said, Guys did Dinky bliss dig for Terry’s nudes & publish them, or did she just RT’ed pics, Terry, herself posted? I woke up to the fire. Please say Dinky Bliss is going to jail.

The third one said, Dinky Bliss, you went so low by Posting your fellow human Nude that’s why you were evicted upon how entertaining you were, you cannot fight grace, just heal.

Details on Dinky Bliss Cause of death will be added soon.

She took Instagram and posted a photo of her PS5 along with the Spiderman & Call Of Duty CDs and quoted “When I’m on my game mode I travel the world guess I’m a Zia Zia.”

Before this, she posted a selfie of her and said, “54 days to hit 30 years, supper excited and grateful to be alive. The universe has been great thus far.”

Who was Dinky bliss?

Dinky bliss was a former housemate of Big Brother Mzansi’s house, where she faced off against contestants like Mpho and Naledi, among many others.

Rethabile Potsane, also known as DinkyBiss was a Big brother Mzansi season 3 contestant. She was a 29-year-old woman from Johannesburg. She was a businesswoman.

According to her bio, She describes herself as bold ambitious, and passionate – she is “loud and proud” and believes “s she can transform people’s moods and lift their spirits when she is around. She likes to socialize and party. She shoots straight from the hip and says she’s constantly evolving and learning. She plays hockey to stay in shape in addition to going out.

She believes that she will bring “drama” to the House. Dramatic action. She “is not going to cook up drama,” nevertheless. Don’t step on my toes, and I won’t step on yours is her catchphrase. Her approach in the House is to research every Housemate before aligning with the right people. She’s going to be nice and kind until she is the last woman standing.

Dinky Bliss was a business entrepreneur. The former Big Brother Mzansi participant loved fashion and was a successful businesswoman. She loves to play hockey to keep fit.

Dinky Bliss got married in 2015. Dinky Bliss and her Nigerian prince celebrated their seventh wedding anniversary in August of this year.

“A happy 7th anniversary to me and my ever-so-humble, down-to-earth husband. You never gave up on me to date. You love me unconditionally; you don’t set rules for me. You allow me to be me. #loud # proud # wild & #Bold. I love you to the moon and back, my Igbo Eze prince,” she wrote in her Instagram post.

Rethabile “Dinkybliss” Potsane who left the Big Brother mansion believes that she made an impression on the other inmates and casting agents.

Dinky bliss was not surprised by the abrupt storyline twist that the viewers witnessed when she and Mvelo Ntuli were kicked out. She claimed that she knew in her spirit that she would be fired even though she wasn’t quite ready to leave the house.

Dinky bliss said, “I was not ready to go because I believed I brought content,” she said. “I’m spiritually gifted so there was a voice that came into my mind that I’m leaving, so while people in the house thought I was being negative, I was readying myself for something I already knew would happen.

“I wanted to leave nicely and be remembered for how I left. It was something to make the housemates remember that at times, stop judging people for what you see at the moment. I wanted to show them that side of me which is fun. So even if they would talk about me they would remember the exit. When Lawrence called my name as the next housemate being evicted, it did not come as something that would make me cry because I was okay with it.”

Dinky bliss twerked her way out of the mansion and said was her way of giving the housemates who had gossiped about her on the show a different perspective of who they thought they had come to know. I thought everybody hated me, I thought people would judge me. It was so nice to open my phone and see the majority of the messages I received were of people asking Big Brother for me to come back. I was very astonished but I feel very blessed to have been there.

After being away from her kids and her ailing mother for almost two weeks so she could join the show, she was happy to see them again after leaving the show. Dinky bliss might not have had a chance to take home the R2n prize, but she still intends to land a job as a presenter on television and grow her fashion line. “I’m going to fix my social media and be intentional about the content I share. I plan to approach production companies and go for auditions. “I have wanted to be in the industry for a very long time. I’m also planning to open stores in Nigeria and Ghana.”, she added.

Tributes pouring in for Dinky bliss

You all be explaining uMsunu! The depression Dinky bliss went through you guys added something to that depression instead of supporting her the time she needed you the most and now you here throwing a “fake reaction Rip” fusek man you killed Dinky that’s it case closed.

THE POPE OF GROOVE tweeted,

Depression is ageless, panic attacks are not a show, anxiety is not an exaggeration, low self-esteem is not a game, mental health is as important as physical health; begin to be more empathetic and respectful with everyone #RIPDinkyBliss

As Immaculates we would like to send our condolences to Dinky’s family, friends, and fanbase we are with you in prayer, Rest in peace Rethabile. Immaculate let’s spread hearts Due to the news That will not be posted on YouTube today. #RIPDinkyBliss

Replying to @PhilMphela I’m so sad…given that she did express she’s battling with depression, and praying for her family and loved ones.

Who are Shane Yerrell and David Sparrey? Meet the gay couple refused in 31 churches Explained