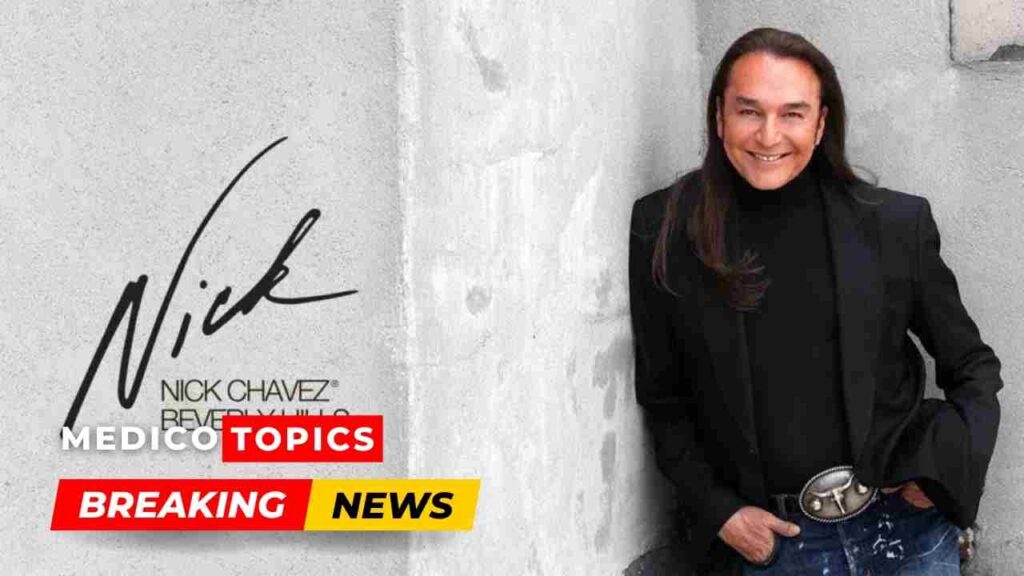 How did Nick Chavez die?

Nick Chavez, the famous hairstylist passed away on December 23. His death news was confirmed by his family members on the social media post and the statement reads,

“It is with immeasurable sadness that we announce that our beloved brother, uncle, cousin, and friend, Nick Chavez passed away today at his residence in Beverly Hills after a long and courageous fight against pancreatic cancer. As a true fighter, Nick persevered through it all, leaving a true legacy of love and light.”

“He was surrounded by his family, leaving us knowing that Nick’s story has been a true love story for the ages. His love and zest for life, his undying love for his family, his compassion for his friends, and his sincere gratitude for his clients, customers, and colleagues he called friends.”

Today, QVC celebrates the life of our dear departed friend, Nick Chavez. For years, this iconic Beverly Hills stylist brought his line of haircare products—along with his style, charm, joy, and laughter—to QVC. He will be truly missed by everybody in the QVC family. pic.twitter.com/hbUoTcgM4u

“Nick inspired people around the globe with his passion, and commitment to bringing beauty into this world, not to mention his abiding joy and devotion to illuminating that true beauty begins and lives within us all. He has touched more people’s hearts than we will ever know.”

“The ongoing support and outpouring of love for Nick will help greatly at this difficult time, in the same way, it helped Nick throughout his journey. We thank you for your constant love and prayers.” Peace and blessings always, The Chavez Family added.

Nick Chavez cause of death:

The hairstylist, Nick Chavez passed away at his residence in Beverly Hills after a long and courageous fight against pancreatic Cancer. Nick Chavez cause of death was cancer.

Nick Chavez revealed that in March 2020, he received a stage two pancreatic cancer diagnosis. The renowned hairstylist began chemotherapy treatment in April to lessen the size of his tumor before surgery. He battled the disease and won.

The driven businessman previously revealed that he had successfully beaten cancer. However, he sadly passed away from Cancer.

Who was Nick Chavez?

Nick Chavez was a well-known hairstylist around the world with his “Nick Chavez Beverly Hills” hair care product brand.

Nick’s love of beauty and spiritual living developed at a young age. Nick Chavez was from Yuma, Arizona. He was the second-oldest of seven children in his family. Nick was used to working hard while also learning holistic healing techniques from his Yaqui Grandmother who lived nearby.

But it was his ability to groom the family’s horses, as well as his determination and confidence, that propelled him forward. Nick developed his natural talents by designing cool, current hairstyles for his siblings and other family members using only his scissors (and a fierce sense of style).

After developing his skills as a teenager, Nick made the transition to California, where he instantly began working in a renowned Beverly Hills salon.

Nick quickly moved up the hairdressing ladder from apprentice to full-fledged stylist, building a loyal clientele and an even more enduring reputation. But once more, Nick’s skills went beyond him.

As an actor and model, he worked with designers like Jean Paul Gaultier, Yves St. Laurent, and Valentino on a tour of Europe that was so successful that it resulted in magazine covers for Vogue, GQ, Elle, and Esquire as well as a 100-foot billboard in Times Square.

Nick performed in roles on TV programmes like “The Young and the Restless” and “Hollywood Detectives.” However, Nick’s experiences and successes in acting and modeling could not match his passion, So he became a hairdresser in Beverly Hills—this time as the owner of his own salon.

He worked with actors, musicians, and models, such as Maria Shriver, Ivana Trump, George Lopez, Queen Noor, Michelle Stafford, Bella Hadid, Gigi Hadid, and many others.

Nick had trouble locating high-quality hair care items for his diverse clientele. Nick took issues into his own hands and created his line, Nick Chavez Beverly Hills, in keeping with his highly ambitious personality.

Nick is dedicated to giving his clients the “Every Day GorgeousTM” look by giving them hair that is healthy, shiny, and gorgeous. His product also includes shampoos, conditioners, coloring, and style products.

After having problems reaching customers with high-quality products, Nick Chavez Beverly Hills was established in 1999. His goods are offered for sale online, including on the renowned home shopping network QVC.

I struggled with finding quality hair care products for my customers and knew I had to take matters into my own hands, Nick said.

Along with his fame as a hairstylist, Nick is also well-known for his very popular line of products, which is currently available online and featured on home shopping channels including QVC (U.S.) and QVC (Germany), as well as The Shopping Channel in Canada and QVC (Japan) abroad. Additionally, Nick’s products are found on such e-commerce sites as beauty.com, dermstore.com, folica.com, qvc.com, and of course nickchavezbeverlyhills.com.

Today, QVC celebrates the life of our dear departed friend, Nick Chavez. For years, this iconic Beverly Hills stylist brought his line of hair care products—along with his style, charm, joy, and laughter—to QVC. He will be truly missed by everybody in the QVC family.

My heart is broken @nickchavezbh was one of the main reasons why I even carried on at @qvc. Not many know this, but I had my first airing in 2015. I sold out! And, I was over the moon! I had a few more shows that did well, but then the dreaded bomb of a show!

Nick Chavez you will be missed! I will miss seeing what you are doing on Facebook. I am so glad I met you! Cancer sucks! Thank you for coming out with all the hair products! Your talent is remarkable! #QVC QVC

How did Mampintsha die? Singer cause of death revealed

God Bless Nick, and condolences to all of his family..so sorry