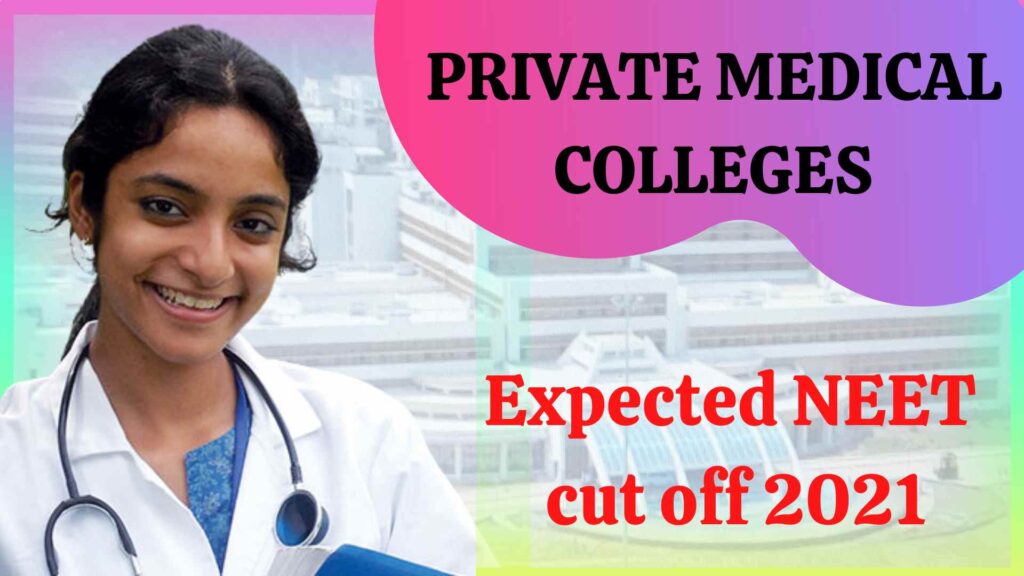 In terms of private medical college admissions, all seats are filled through the Tamil Nadu state itself. There is no central government quota.

From each college, a few seats are reserved for the State Government Quota and the rest of them are allocated for the Management Quota. On the TN Medical Selection website, you can apply for these 2 separately whenever the applications are out.

Here in this post I am gonna get you through the expected NEET cut off for government quota in private medical colleges for the year 2021 and the expected cut off for Management quota will be published shortly in a new blog post.

Before getting into the cut off

I can create 3 stages of expected cutoffs for you so that you can predict how your marks will perform. Each of these three levels of cut-off calculations has its own precision and accuracy.

Also, keep in mind that all of my cut-off marks are the final marks you’ll expect in mop-up (3rd round counselling). So first-round counselling generally gets 10 marks higher than my estimate.

Allow the notification above or just subscribe to our mail list to obtain all of the cut off marks updates at regular intervals on your mobile devices.

We got the specific cut off for each category from the allotted list from last year and the year before last year. Before moving on to the cut off part, we must first understand what the cut off was previously; only then will we have a clearer picture of the cut off. I hope you understand.

The pure number of seats apart from 7.5% in each stream of colleges,

The pure number of seats apart from 7.5% in each stream of colleges,

There is a flood of information on the internet that this year will see the addition of 11 new medical colleges (4 of which are almost ready) and 4 new private medical colleges. However, please do not get trapped here. Anyway, let’s see how the number of seat changes if they’re added.

I am seeing 2 probabilities here,

493, 1849, and 364 are the final product of seats after 7.5% reservation special category reserve and return and the AIQ return.

Things to consider before calculating the cut off mark

Before we go right into calculating the NEET cut off 2021 in Tamilnadu, there are a few factors to keep in mind. These factors will improve the calculation’s effectiveness and reliability.

Remember these factors will be useful only after the Times of India report or Rank list.

Until then cut off marks will be calculated based on the last year’s cut off and seat matrix in comparison with this year’s seat matrix.

2. NEET Marks vs rank in Tamilnadu

The Times Of India, on the other hand, will generally analyze the NEET marks vs. rank for each year. This will be as accurate as possible, as it will be reflected in the merit list exactly. I made this comment since TOI has proven its reliability over the past two years.

Because neither of them has been released yet, the reliability of this predicted cut off could be less.

After NEET marks vs rank, the expected NEET cut off 2021 in Tamilnadu is mainly dependent on the same mark density. This is an analogy and can only be used if we know the TOI or rank list.

I am going to enlighten you with my entire calculating technique for each of my 3 cut-off calculations in order to help you understand them better. These will be covered in more detail further down.

This is the easiest one of all time. We can figure this out using the cutoff from last year and the seat matrix from both last year and this year. This is simply a unitary method of calculation that we learned in elementary school. Cut off calculation will be explained in each category.

As the name says it’s an approximate value no one can’t define the cut off until either the Times of India report or Rank list release.

I explained these factors in one of the blogs, read it for better understanding,

According to the above factors, records, and analysis of various sectors thus far, the cut-off increase for OC, BC, BCM, and MBC will be about 45 to 60 marks. And it may rise between 50 and 70 marks for SC, SCA, and ST. It’s only a speculative, statistical, and historical prediction.

Because the data we’ll be using comes from a news channel called Times of India, which generally provides a statistical NEET mark vs rank of each state even before the official rank list, we may expect moderate accuracy. Over the past two years, TOI has proven its reliability and accuracy.

The factors that we are going to use here are

Step by step to determine your category expected cut off mark:

We may expect a highly accurate cut off because here the data we’ll be using is the official rank list.

The factors that we are going to use here are

Step by step to determine your category expected cut off mark:

As of now, we don’t have the official rank list or the Time of India report, So we have to rely on the low accuracy cut off calculation(80%). Let’s see in the order of expected general rank, community rank, and cut off mark.

Expected General rank for each category

Expected Community rank for each category

These expected community ranks can be raised or lowered by 10 to 15 ranks on each side for BC, MBC, and SC.

For ST, you can add 5 ranks less or more on either side.

Expected cut off mark for each category

These prediction cut-off marks can be adjusted by 10 marks on each side.

I can’t take dicision for you. This is completely depends on your financial status. Level education won’t be a problem here(mostly). If you would like to know more about the fees structure of entire mbbs in private and government colleges then have a look at here – Tamilnadu Medical Colleges List, Fees structure, Seats matrix in 2021

Will i get self finance college with 454 marks bc category