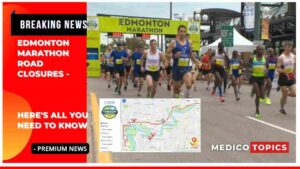 Between 5:00 AM and 4:00 PM on Sundays, Jasper Avenue will be closed from 95th Street to 111th Street. Let’s see Edmonton Marathon Road Closures.

The Edmonton Convention Centre will serve as the race’s starting and finishing places. From Saturday at 6 a.m. until Sunday at 8 p.m., a section of Jasper Avenue between 97 Street and 99 Street will be shut down.

The city stated that travellers should prepare for significant traffic delays when crossing those portions of the race route as well as Buena Vista Road at 140 Street.

The city anticipates longer delays on Sunday in the Jasper Avenue section that will be closed, especially at 100 Street, 101 Street, 105 Street, and 109 Street.

When it is safe to do so, course marshals and police will help with traffic crossing at the impacted junctions, but the city warned that sometimes delays might reach an hour.

Due to Edmonton’s upcoming hosting of the Servus Edmonton Marathon in 2022, drivers should plan on travel delays this weekend, particularly in the Downtown area.

The 31st edition of the race will feature hundreds of competitors sprinting through Edmonton’s downtown centre from east to west, the city announced in a Friday PSA.

The City of Edmonton’s website includes a map of current traffic interruptions as well as a map of road closures for special events.

Here’s all you need to know

The Valley Zoo, Laurier Park, and Buena Vista Park will all have diversion signs for visitors to avoid, according to the city, which also noted that many of the neighbourhoods along the marathon course will only let access to local motorists.

The city names Virginia Park, Bellevue, Highlands, Beverly Heights, Rundle Heights, Glenora, Crestwood, Parkview, and Laurier Heights as among of the neighbourhoods that are impacted. Residents in certain areas are advised by the authorities to stay away from parking along the marathon route.

According to the city, traffic jams will affect areas east of the core until 10:30 a.m. and areas west of the centre until 4 p.m.

Between 6 a.m. on Saturday and 4 p.m. on Sunday, drivers may experience difficulty accessing a number of Downtown parking facilities due to traffic interruptions caused by the event. The Stanley A. Milner Library Parkade, Sun Life Place Parkade, KRP Tower, Double Tree by Hilton, and both the east and west parkades of Canada Place are among the institutions that are affected.

The 101A Avenue surface lots between 96 and 97 Streets, the Diamond and Impark lots on 99 Street south of Jasper Avenue, and other access points will also be impacted by the marathon.

Transit users in Edmonton should be prepared for delays on routes that run through Downtown as well as potential bus stop closures on Saturday for routes 2, 5, 111, and 900X.

When will the race start?

Actress Claudia Jimenez died at 63: Cause of death Revealed