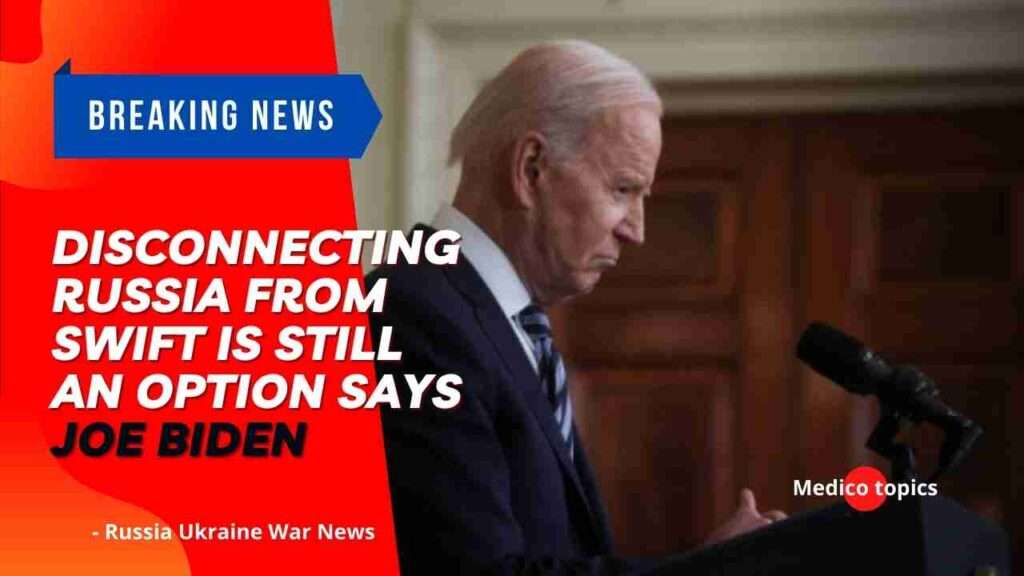 United States President Joe Biden said that for now, as part of US sanctions against Russia for an attack on Ukraine, Moscow will not be disconnected from the SWIFT international payment system. However, according to him, this option remains possible.

It is reported by RBC-Ukraine with reference to Biden’s briefing. (Source)

“Russia will not be cut off from SWIFT yet, although such an option remains an option,” he said, adding that the effect of the sanctions already being introduced will be comparable to this.

He also added that the sanctions might not deter Russian President Vladimir Putin.

“He will see the impact of the sanctions. This will greatly weaken his country, so he will have to make very difficult decisions or weaken himself as a country,” he said.

We will remind, today Biden announced the introduction of new sanctions against Russia for the attack on Ukraine.

It should be noted that today Vladimir Putin launched a full-scale attack on Ukraine, announcing a “special military operation in the Donbass.”

SWIFT is a high-security network that links financial institutions all around the world.

It is used by a variety of financial organizations to send and receive data, such as instructions for cross-border money transfers.

It does not transport or keep money or securities, rather it is used to handle transactions. SWIFT uses standardized codes for instructions, allowing institutions to process payments more swiftly.

It was established in 1973. More than 11,000 financial institutions in more than 200 countries used the service in 2021. It handles around 10 billion financial messages every year.

How is SWIFT used?

Financial firms use the format to make cross-border payments easier.

The French business will then notify the Russian company via SWIFT that the money transfer has arrived and that it may access the funds.

What will happen if Russia gets kicked out of SWIFT?

Russia’s capacity to do business with other countries would be harmed if it was dropped from SWIFT. Metal, oil, gas, and other commodity shipments may be halted for an extended length of time.

“If Russia is cut off from SWIFT, we won’t get [foreign] cash, but customers, first and foremost European nations, won’t get our products,” Nikolai Zhuravlev, vice speaker of Russia’s upper chamber of parliament, said last month.

According to the Financial Times, the European Central Bank has issued a warning to banks that Russia may be removed from the SWIFT network.

According to Elina Ribakova, an economist at the Washington-based Institute for International Finance, if Russia is removed from SWIFT, the country will experience considerable economic disruption for a period of time.

According to Ribakova, the interruption might lead the Russian economy to decline, sending the ruble, the country’s currency, plunging in the short term.

However, a large interruption would most likely be just short, since Russia would have certain capabilities to counteract a suspension.

What can Russia do in response?

The System for Transfer of Financial Messages (SPFS) is Russia’s own payment system, however, it is a considerably smaller operation than SWIFT.

Because SPFS has roughly 400 users and is responsible for around 20% of domestic transactions, the country’s financial troubles would be severe if it were cut off from SWIFT.