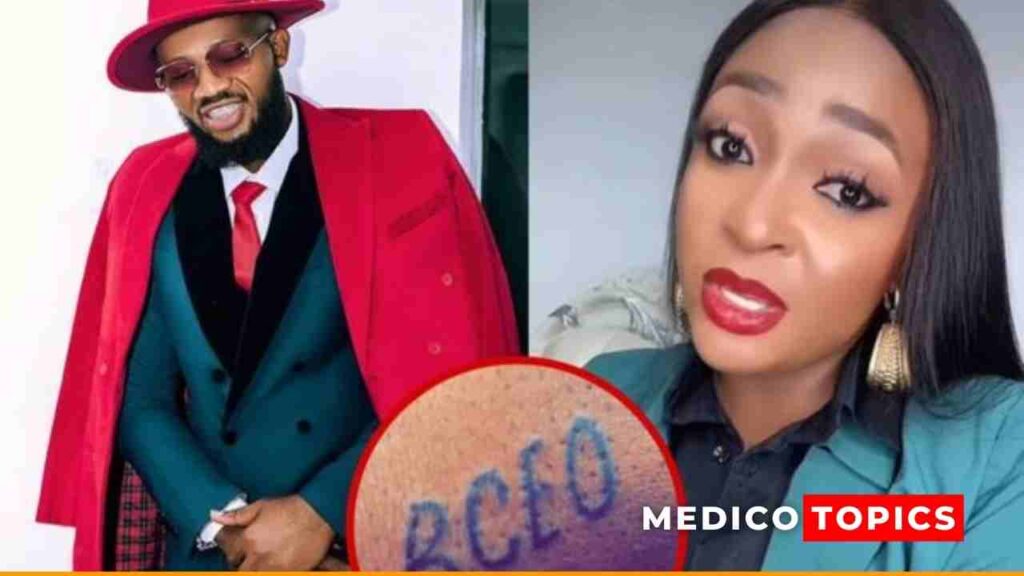 Blessing CEO is in a relationship with the celebrity auto dealer, Ikechukwu Ogbonna, popularly known as IVD. Let’s see more about how this happened in detail.

Blessing Okoro, a relationship specialist also known as Blessing CEO, has sparked dating rumors with IVD. Today, she announced her relationship with the mystery man on Instagram.

The relationship therapist posted a picture of a mysterious man with the tattoo on Instagram. She shared a picture of the man’s hand in which her name had been inked. Fans confirm that it’s IVD’s hand.

This occurs just two months after the passing of IVD’s wife Bimbo, who passed away under controversial circumstances.

Ikechukwu Darry Ogbonna, popularly known as IVD, is a well-known Lagos businessman, singer, and entrepreneur who sells cars and other auto parts.

He is the CEO of IVD Autos Limited and has also engaged in real estate and entertainment. He is also passionate about the vehicle industry.

Recently, he was arrested over his wife Bimbo’s death.

Ikechukwu was married to Bimbo Ogbonna, with whom he had five children. Bimbo died in a fire accident on October 2022.

Jazz said in one of the posts that the auto dealer IVD had killed Bimbo. Oyindamola Martins, Bimbo’s brother, also shared many recordings of his sister and IVD arguing.

Bimbo accused the businessman of beating her repeatedly in 2019. A year later, IVD refuted claims that their marriage was experiencing issues.

A video of their reconciliation was also disclosed by him. Later, in October, Ikechukwu’s late wife, Bimbo, confronted him over some issue.

It eventually turned into a fight, during which their apartment was set on fire, resulting in the burning of Bimbo, while Ikechukwu managed to escape with minor injuries.

Bimbo spent more than 48 hours in intensive care before passing away from the wounds she received in the event.

Domestic violence reportedly occurred in Ikechukwu and Bimbo’s marriage before she finally passed away.

Bimbo reportedly passed away on October 15, 2022, after serious burns she allegedly received in her marital house. According to several other sources, she allegedly had a long history of domestic abuse.

In order to refute the allegations that IVD physically beat and killed his wife, Blessing CEO, who has been outspoken in the case, has given receipts and supporting documentation.

Blessing CEO revealed how the deceased’s family is battling for IVD’s money. She claims that the late Bimbo’s family, especially Mama Jazz, her older sister, is after IVD’s money and life.

People who knew the pair were aware of Bimbo’s violent past. The dead always cracked bottles on her husband’s head on a regular basis, the relationship specialist stated.

According to Blessing, the deceased Bimbo was a violent offender and a victim of suicide.

Fans’ reaction to the Blessing CEO and IVD relationship news:

Don’t worry the same thing that killed the wife goes soon kill the side chic, We go soon hear justice for blessing CEO.

Wait I read Blessing CEO is dating IVD. 2023 is about to explode

No wonder she was so bold and loud..defending the man…she couldn’t even wait for the woman to rest in peace before coming to blame her …Nawa …

This blessing CEO lady is a disgusting trash of a human. No excuse for her stupidity and inhumane nature. The disease is no longer clout, it’s worse!

How did Barry Lane die? Former Ryder Cup player cause of death Explained

How did Kameron Rubin die? Erie Express player cause of death Explained