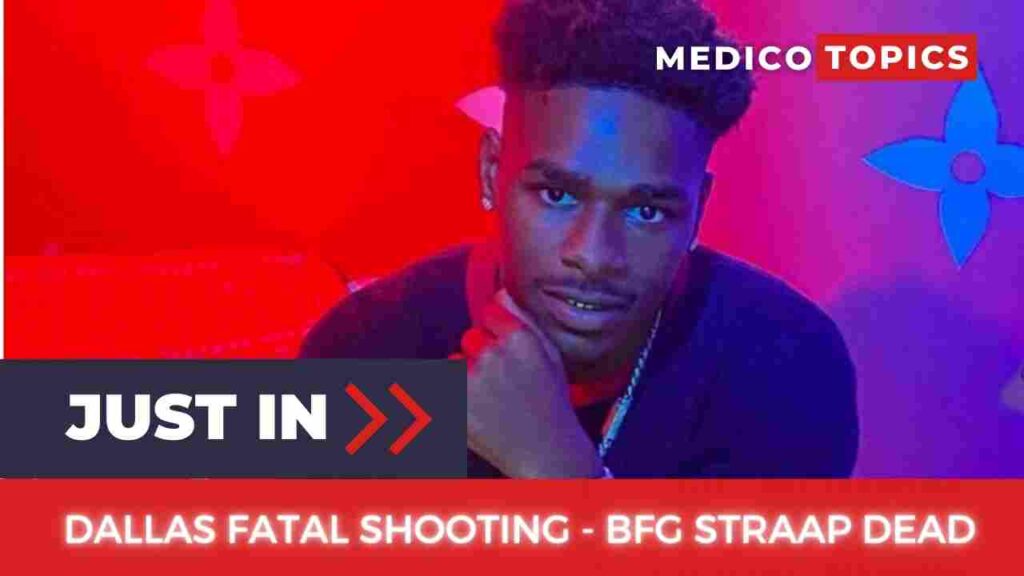 Police are searching for the individual who shot and murdered two people in Dallas on Thursday afternoon, including local rapper BFG Straap. Let’s see what happened, behind the scenes of shooting.

Police are searching for the individual who shot and murdered two people in Dallas on Thursday afternoon, including local rapper BFG Strapp.

The circumstances surrounding the murders are under investigation.

What happened to BFG Strapp?

Rapper from Dallas who was shot and transported to a hospital in a private vehicle passed on Thursday afternoon, according to Dallas police.

At the site, a second individual was also shot and killed.

Antywon Dillard, a rapper who is 22 years old, was identified by Dallas police. According to the Dallas Morning News, his nickname was BFG Straap.

According to Dallas police, Cory Medina Lucien, 26, was the other victim.

LD BFG Straap’s manager, The Manager, announced the rapper’s passing on social media. On Instagram, he posted a photograph of the rapper. Her caption read:

My heart is in a million pieces right now!

“If I don’t respond y’all know that’s not like me but I will tho I’m just hurting too bad right now.”

Officers from Dallas responded to a gunshot complaint in the 2800 block of Casey Street on Thursday at 3:30 p.m.

After being located by the police after being shot many times, Lucien was declared dead on the spot.

Officers discovered that Dillard, a second victim, had been transported to a nearby hospital in a private car where he later passed away from a gunshot wound.

The cause of the deadly shooting is unknown, according to Dallas police. And a serious investigation is going on for the suspect.

Who is BFG Strapp?

According to The Dallas Morning News, east Dallas native Dillard aka BFG Straap has more than 17,400 monthly Spotify listeners and over 10,000 YouTube followers.

The rapper’s current album, “11:11,” was published less than a month ago. His debut album, “STRAAP A MANIAC,” was released in 2019. Anyone with information on this case is asked to contact Homicide Detective Kim Mayfield at 214-671-3646 or by email at kimberly.mayfield@dallaspolice.gov, according to the Dallas Police Department.