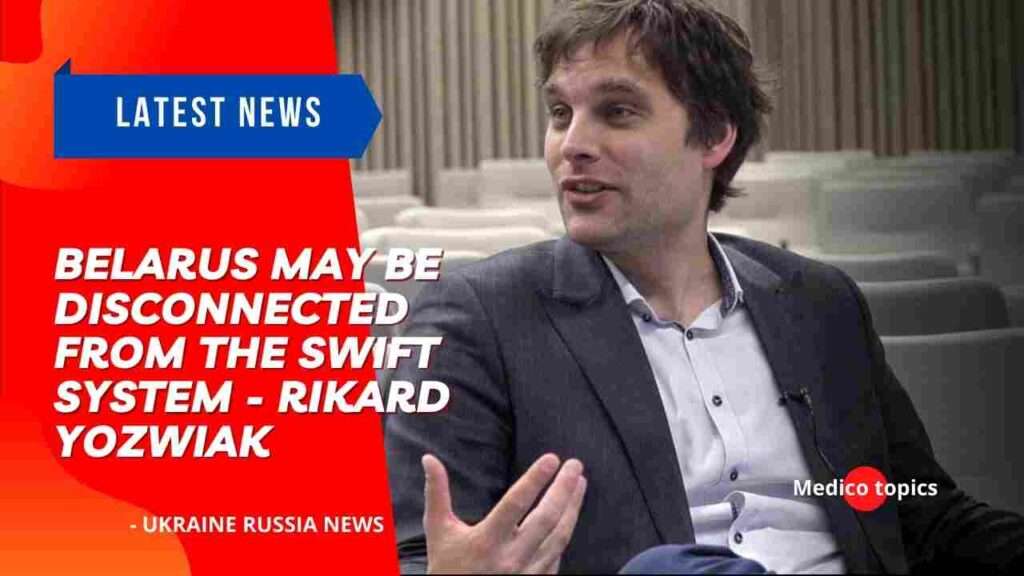 Belarus SWIFT: Belarus may be disconnected from the SWIFT system of international bank payments. Earlier, the process of disconnecting the Russian Federation from the system began.

It is reported by Medico topics with reference to the Brussels-based journalist Rikard Yozwiak on Twitter.

And there is also a push to cut #Belarus from SWIFT https://t.co/t3zL6VwDwr

“The foreign ministers of the EU countries will meet tomorrow via videoconference to reach a political agreement on SWIFT sanctions. There is also a proposal to disconnect Belarus from SWIFT,” he wrote.

Read more about what SWIFT is and how its shutdown will affect the Russian Federation – in the material of Medico topics. See below

Russia will be disconnected from SWIFT, – Kuleba

Russia is disconnected from the system of international bank payments SWIFT.

It is reported by medico topics with reference to the statement of the Minister of Foreign Affairs Dmitry Kuleba on Facebook.

An official decision has not yet been issued, but technical preparations have already begun for making a decision and implementing this sanction. We gnawed, gnawed and gnawed,” Kuleba wrote.

According to him, “the entire vertical of Ukrainian diplomacy worked – from the President of Ukraine to the attaché in the Ukrainian embassy.”

“Thank you also to the thousands of people, in particular the Ukrainian diaspora, who put pressure on their governments to support this decision. Ukrainian diplomats dedicate this victory to all the defenders of Ukraine,” he added. 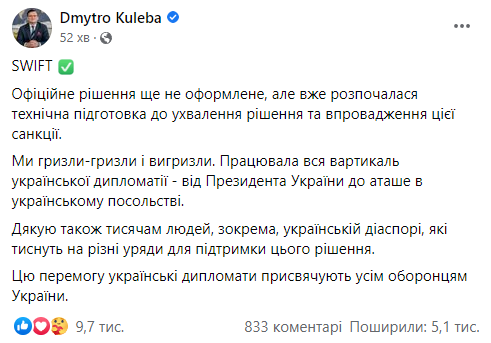 It is reported by Medico topics with reference to the Brussels-based journalist Rikard Yozwiak on Twitter.

“Germany will move forward with regard to SWIFT,” the journalist wrote.

The West is preparing to disconnect Russia from SWIFT. Why this sanction is needed and how it threatens the Kremlin

The US and EU countries are considering the possibility of disconnecting the Russian Federation from the SWIFT system of international bank payments. This move could have a severe impact on the Russian economy, shutting down the financial operations of businesses and banks.

What is SWIFT and how its shutdown will affect the Russian Federation – in the material Medico topics.

SWIFT (Society for Worldwide Interbank Financial Telecommunications) allows you to make payments around the world and receive data about these transactions. More than 11 thousand companies and organizations around the world are connected to the system. More than $330 billion is sent via SWIFT every day.

How its shutdown will affect the Russian Federation?

According to Rosswift, in the Russian Federation, 291 banks in 48 cities were connected to SWIFT by the beginning of the year. The aggressor country was ranked 13th in terms of message traffic in the system two years ago. Disconnection from it threatens Russian banks and their clients with blocking and restricting access to financial markets around the world.

It will be much more difficult for Russian businesses to carry out export-import operations and receive loans from foreign companies. It may also discourage local investors from dealing in Russian debt.

Russia’s military invasion of Ukraine forced even those countries that were previously against the imposition of such sanctions against Moscow to reconsider their opinion on this issue. Western countries ambiguously assessed the blocking of SWIFT as a measure against the Kremlin regime.

US President Joe Biden, even after the invasion, said that the sanctions against Russian banks are quite tough, and therefore disconnecting from SWIFT is not so important. However, according to Bloomberg, the White House administration has again returned to discussing this issue, starting negotiations with the US Federal Reserve.

In addition, the authorities of Cyprus and Italy, who were previously skeptical about this idea, declared their readiness to participate in disconnecting the Russian Federation from SWIFT. Hungary also said that they did not intend to prevent the introduction of this sanction against the aggressor.

Unilaterally, countries cannot make such a decision – neither the US nor the EU. SWIFT as an organization isolates the Russian Federation from its system only if all countries support this decision.

There have already been precedents in the world when Iran fell under such sanctions in 2012. It was one of the measures aimed at containing its nuclear program. The unprecedented aggression of the Russian Federation against Ukraine, threatening consequences for the whole of Europe, is clearly a much greater reason to impose such sanctions now.

I hope I explained this blog (Belarus may be disconnected from the SWIFT system) in a better way.