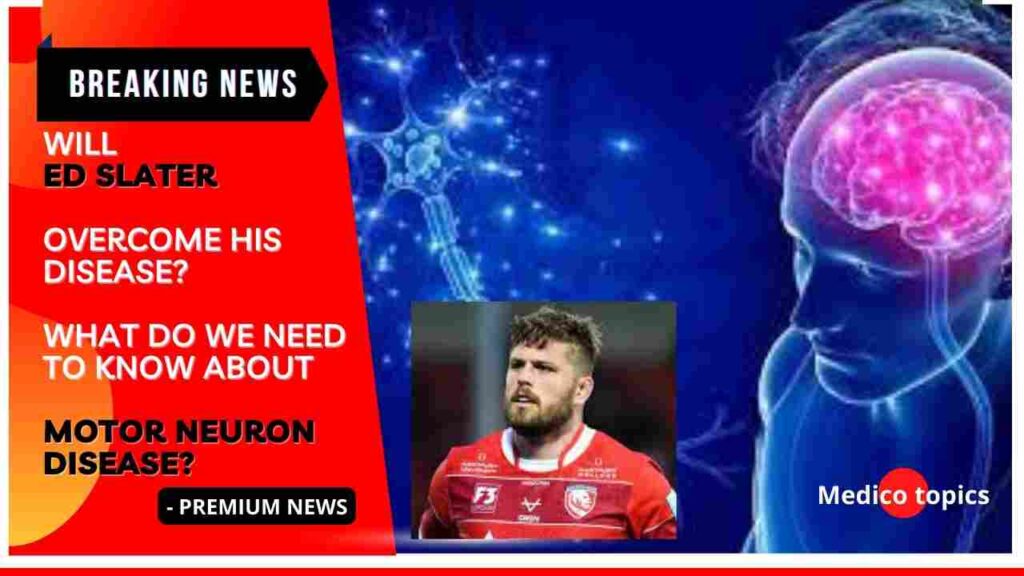 Gloucester has revealed their second row and, the former Leicester captain suffering from motor neuron disease. Let’s see What happened to Ed slater and will he overcome the disease. Also learn about Motor Neuron Disease.

Who is Ed Slater?

Edward Nicholas Slater is a retired English rugby union player who most recently played for Gloucester Rugby. He played at lock. Ed Slater was born in Leicester, England.

With his sheer size and physical presence, he was aware from an early age that he was fated to be an athlete.

After a thriving campaign during the 2012-2013 season, he was rewarded a Premiership Winners Medal by the league. Following a diagnosis of motor neuron disease in July 2022, Slater quit professional rugby.

At the age of 33, motor neuron disease (MND) has been diagnosed in Gloucester lock and former Leicester captain Ed Slater.

His illness was identified last week after six months of testing, and with the help of his family, friends, and Gloucester Rugby, he has made the tough decision to leave the world of professional rugby. He has already announced his immediate retirement from the sport.

Will Ed Slater overcome his disease?

A statement from Gloucester said: “Everyone at Gloucester Rugby, including the players, coaches, and staff, is fully dedicated to helping Ed, his wife Jo, and their three children however they need it.

The wider rugby community, as well as supporters of Gloucester and Leicester, will likely feel the same way. “Gloucester Rugby has started a JustGiving page while Ed, his family, and the Club decide what to do next.

The use of these funds, including whether to directly assist Ed and his family or donate to a chosen MND charity, will be decided in due course.”

Several rugby players have been diagnosed with MND, and Joost van der Westhuizen, a former South African scrum-half and 1995 World Cup champion passed away from the condition in 2017.

Doddie Weir, a legend of the British and Irish Lions and Scotland, revealed in 2017 that he had been diagnosed with the illness. Since then, he has raised money for research through his My Name’5 Doddie Foundation.

“Everyone at Gloucester Rugby – players, management, and staffs are fully determined to support Ed, with his wife Jo, and his three children. We know the same will be true of Gloucester and Leicester fans, and the wider rugby community.

“While Ed, his family, and the Club take time to choose the next steps, Gloucester Rugby has opened a JustGiving page.

The direction of these funds will be resolved in due course, whether it will be supporting Ed and his family directly and/or a selected MND charity.”

Sending all of our support from everyone at Saracens

So sorry to hear this. Doddie and everyone at My Name’5 Doddie Foundation will do all we can to support Ed and his family.

Our heartfelt thoughts to Ed. Sending our support to the Slater Family and all at

Leicester Tigers are extremely saddened to learn that former club captain Ed Slater has announced that he has been diagnosed with Motor Neuron Disease (MND).

We’re sorry to read this news. The MND Association will always be here to support people like Ed and his family.

What is Motor Neuron Disease (MND)?

Motor Neurone Disease (MND) is an abnormal condition that affects the brain and nerves. It provokes weakness that gets worse over time. There’s no cure for MND, but there are treatments to help lower the impact.

Some people live with the illness for many years. MND can extremely shorten life expectancy and, unfortunately finally leads to death.

The term “motor neuron disease” describes a set of illnesses that impair the function of the motor nerves in the spine and brain over time. They are an unusual but serious type of neurodegenerative illness.

Motor neurons are the brain cells that are responsible for actions like walking, conversing with friends, and chewing food. They can suffer injury just like other body parts do.

You may be familiar with Lou Gehrig’s disease, also referred to as ALS. There are numerous less well-known kinds of motor neuron disease in addition to this particular one.

Motor neurons are nerve cells that communicate with muscles through electrical output signals, influencing how well the muscles can perform.

Although the symptoms of motor neuron disease (MND) can manifest at any age, they typically do so beyond the age of 50. Males are highly impacted than females.

Amyotrophic lateral sclerosis is the most prevalent kind of MND (ALS).

The most prevalent form of MND is ALS. It affects the brain and spinal cord’s upper and lower motor neurons, which in turn impact the muscles that control the arms, legs, mouth, and respiratory system.

The average lifespan of someone with ALS is three to five years after diagnosis, however, with supportive care, some people can live for ten years or longer.

This disease impacts the brain’s neurons. It is an uncommon variety of MND with a slower rate of progression than ALS. Although it won’t kill you, it can lower your quality of life. Children can develop juvenile primary lateral sclerosis.

This affects the brain stem and is frequently present in ALS patients. It makes it difficult to speak, swallow, and consume, and it frequently triggers choking episodes.

It is an uncommon form of MND. Lower motor neurons in the spinal cord are impacted, which results in gradual but increasing muscle atrophy, particularly in the arms, legs, and mouth.

It is an inherited MND that manifests in young people. There are three varieties, and each is brought on by the SMA1 genetic mutation. Legs, limbs, and the trunk are typically affected. The type will determine the long-term future.

The following are examples of motor neuron disease’s physical effects:

Although the origins of MND are unknown, numerous investigations have been conducted worldwide on:

Since 1993, several gene mutations have been discovered, and current research hopes to find additional genes connected to MND. Ninety to five percent or more of cases are sporadic.

When specialized nerve cells (motor neurons) in the brain and spinal cord gradually stop functioning, motor neuron disease results. The reason why this occurs is unclear.

The cause, according to researchers, is likely a chain of events involving a combination of harmful genetic and environmental variables. We may gradually lose the ability to manage this damage as we age, leading to permanent neurodegeneration.

A close relative with motor neuron disease or the associated ailment frontotemporal dementia affects about 5% of people with the disease. This condition is known as familial motor neuron disease, which can be inherited or linked to a gene-related issue that can lead to issues at a younger age.

If you notice the earliest signs of motor neuron disease, such as a developing, typically painless grip weakness, consult your doctor right once.

After an initial evaluation, they could suggest that you see a neurologist for a second opinion and perhaps some testing.

During the early stages of the disorder, it can be challenging to diagnose motor neuron disease because many of the early symptoms might also be caused by other, more prevalent medical conditions, such as:

A trapped nerve – nerves can occasionally become trapped and squeezed under the spine due to wear and tear of the spine’s bones.

Peripheral neuropathy is the term used when another medical condition, most frequently type 2 diabetes, damages a portion of the nervous system.

Motor neuron disease cannot be diagnosed with a specific test, and it might be challenging in the early stages. Diagnostic tests, along with a thorough medical history and physical examination, are necessary for diagnosis.

A neurologist (a physician who specializes in the treatment of illnesses of the neurological system) will be suggested if motor neuron disease is suspected.

The electrical examination of muscle function known as an electromyogram (EMG) is frequently utilized in diagnostic procedures.

A nerve conduction study (NCS), which evaluates a nerve’s capacity to transmit a signal, is another frequent examination.

Blood tests and magnetic resonance imaging (MRI) scans are further tests that could be conducted to help with the diagnosis and rule out other potential reasons for the symptoms.

No medication can appreciably change the course of motor neuron disease. To stop excessive salivation, muscle spasms, and involuntary twitching of the muscles, doctors may give medication.

However, the main goals of treatment are to maintain function, improve quality of life, and offer comfort.

Riluzole (Rilutek), a disease-modifying medication, is offered in New Zealand and has the potential to somewhat extend some patients’ lives. For those who meet certain requirements, riluzole is covered and can only be given by a specialist, typically a neurologist.

The problem will need to be managed with the help of a group of medical experts, which may include:

These medical specialists will endeavor to maintain mobility and make the best possible use of the affected person’s talents in collaboration with the patient and family.

There is equipment to help with practical issues and communication issues. Most people eventually need full-time nursing care because of the condition’s progressive nature.

A mechanical ventilator may be needed to maintain breathing when it gets too difficult. Although using a ventilator can extend the life and enhance sleep, it won’t change the course of the disease, thus many people with motor neuron disease opt to avoid using them for extended periods.

Is the Monarch butterfly endangered? What do we need to do?

[…] Will Ed Slater overcome his disease? What do we need to know about Motor Neuron Disease? […]