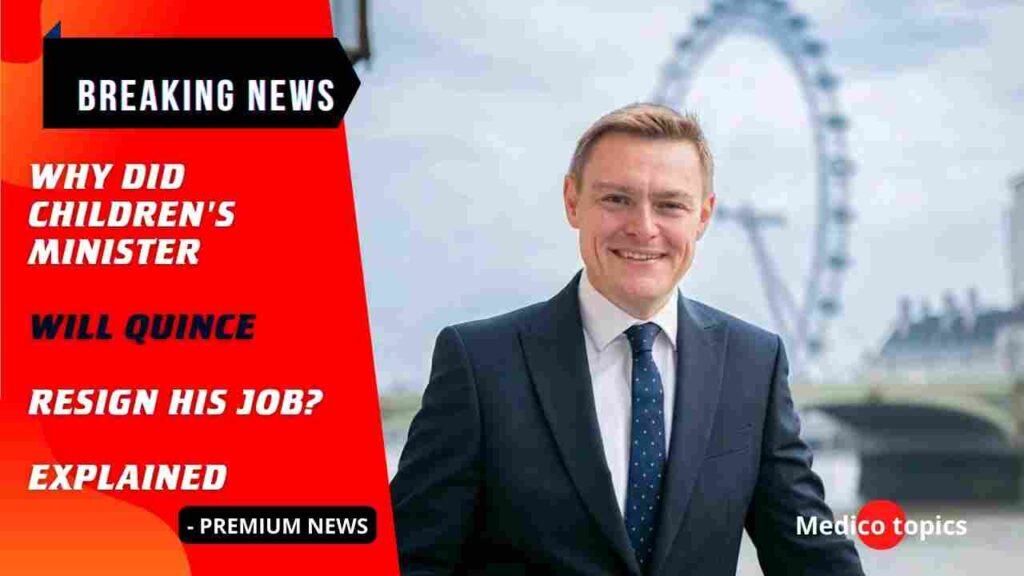 William James Quince is a politician for the British Conservative Party and a top lawyer.Will Quince, a Colchester MP, has resigned from his position as minister for children because of “inaccurate briefings” on the Chris Pincher incident. Let’s see why will quince resign?

Will Quince was born on December 27, 1982. Following graduation, Quince worked as a market development executive for Concur Technologies Ltd. and a customer development professional for Britvic plc. He is a citizen of Ware, Hertfordshire, and was elected as one of two Conservative Party council members for the Ware Christchurch ward on the East Hertfordshire District Council in May 2007. However, he resigned from his position in April 2009 after being nominated as the Conservative Party’s potential Colchester parliamentary candidate.

He was first chosen as the Member of Parliament (MP) for Colchester in the 2015 general election, defeating Sir Bob Russell, a member of the Liberal Democrat Party.
Quince served as a district councilor for Colchester from 2011 to 2016. Since May 2015, Will Quince has represented Colchester as a Conservative member of parliament. He previously worked for the Department of Work and Pensions before being named the children minister in September 2021.

Why Will Quince resign?

Will Quince, the minister for children and families, announced his resignation on Twitter.
He tweeted: “With great sadness and regret, I have this morning tendered my resignation to the Prime Minister after I accepted and repeated assurances on Monday to the media which have now been found to be inaccurate. The tweet and the letter he wrote to Prime Minister is provided in this link. https://twitter.com/willquince

Quince had given interviews on Monday, July 4th defending Johnson in the Pincher scandal.
He gave “categorical assurance” that Johnson was unaware of any “particular” claims against the former chief whip, reassuring the public.

The PM acknowledged on July 5 that he had received a report following an investigation into Pincher’s behavior, proving that this information was false.

The resignation is remarkable given Mr. Quince’s defense of Boris Johnson about allegations that the Prime Minister was aware of Chris Pincher’s past before appointing him as deputy chief whip. Due to allegations that he sexually abused two men at an associates club. Finally he resigned his position with great sadness and regret.

How did Mohammed Barkindo die? Cause of Death Explained

1 thought on “Why did children’s minister Will Quince resign his job? Explained”