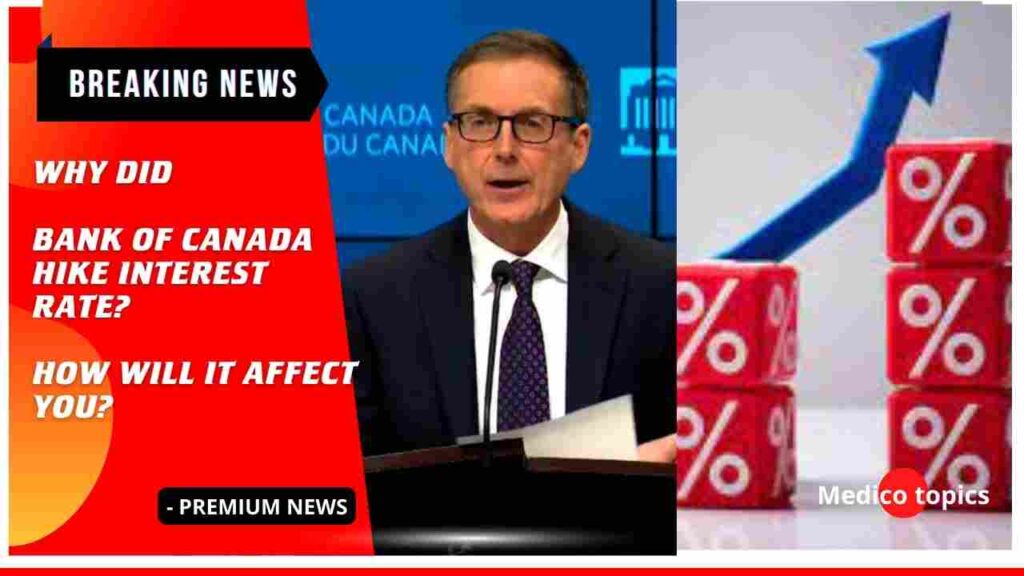 On Wednesday, the Bank of Canada increased its benchmark interest rate to 1.5% and hinted at further increases.

It was widely anticipated that the central bank would decide to increase its rate by half a percentage point as part of its strong efforts to control excessive inflation.

It is expected that the Bank of Canada will raise interest rates this week, which could make it the high rate increase of the year.

Analysts predict the bank to boost the rate by 0.75 percent, bringing it from 1.5 percent to 2.25 percent. It will be the fourth successive increase this year following a two-year pandemic-time low rate of 0.25 percent.

According to Michael Carney, the director of business development at home listings platform HouseSigma, the rate hasn’t exceeded 1.75 percent since 2016, that will place Canada’s mortgage stress test in “uncharted waters.”

The qualifying rate for borrowers will be either 5.25 percent or 2 percent more than the bank’s offer, whichever is higher, to demonstrate their ability to pay a higher mortgage rate.

It will be difficult for those whose mortgages are up for renewal as well as new borrowers hoping to enter the house ownership market as a result of this hike.

The last time the rate was 2.25 percent was in April 2009, immediately following the 2008 recession, although there was no stress test at that time and the discounted mortgage rate was only 3.85 percent.

Analysts believe that after the anticipated fourth increase on July 13, there may be two more increases before the end of the year. The earlier rises happened in March and June.

The upcoming increases by the bank are a response to the increasing cost of housing and rampant inflation that has not been seen in decades.

May saw Canada’s inflation rate reach 7.7 percent year over year, the largest increase in consumer prices since 1983. Additionally, significant rises earlier in the year, including 6.8% in April, have added to this.

A Bank of Canada interest rate of 2.5 percent by early 2023 and remaining at that level through the end of 2025 is believed to be sufficient to control inflation given the sensitivity of households to rising rates as a result of their heavy debt loads, according to Bob Dugan, chief economist of Canada Mortgage and Housing Corporation (CMHC).

It neither encourages economic growth nor causes it to decline under this moderate interest rate scenario of 2.5 percent.

In the high-interest rate scenario, it will reach 3.5 percent in early 2023 before gradually declining to 2.5 percent, which is considered “neutral.”

Under the high-interest rate scenario, the unemployment rate would increase to up to 7 percent in early 2023 from its all-time low of 4.9 percent in June 2022.

Naturally, this will result in higher unemployment and slower pay growth, which will make home ownership more challenging. Additionally, rising rates will raise building prices due to higher finance expenses, on top of rising labor and material costs.

“The rapid increases in home prices over the past two years have not been sustainable. A significant portion of new house purchasers is no longer able to afford housing costs, which will cause a slowdown in 2022.

According to Dugan, the anticipated rises in borrowing rates cause a further slowing in the rise of home prices in 2022 and 2023.

Mortgage rates won’t settle down until 2024, when property values will start to expand again, albeit slowly, thanks to rising household income and increased immigration.

What happens if the Bank of Canada increases interest rates?

The Bank has the power to lower interest rates to stimulate economic activity if the economy is having trouble expanding or is under stress, as it was during the COVID-19 epidemic.

People and businesses pay less interest on new and existing loans and mortgages and earn less on savings when the overnight rate declines.

They typically increase their spending as a result of this, which strengthens the economy.

Conversely, excessive inflation might result from an economy that is rising too quickly.
In this case, the Bank might increase the overnight rate, which would result in higher loan and mortgage interest rates for consumers and companies.

How Bank of Canada interest rate Hike affects you?

Canadians with fixed-rate debt won’t be impacted by increased interest rates from the Bank of Canada.
However, the rate increase may prompt lenders to raise the prime rate at which Canadians are charged for loans, which would then increase variable interest rates.

People in Canada who have debts with fixed rates won’t be impacted when the Bank of Canada boosts interest rates. The rate increase, however, may prompt lenders to raise the prime interest rate that Canadians pay for their loans, which would then increase variable interest rates.

Mortgages, credit cards, lines of credit, auto loans, student loans, and loans for college are among debt types that may have variable interest rates.

In essence, if you are a customer with a variable-rate loan, an increase in interest rates will cause you to pay more every month.

Ipos research found that Canadians saw $149 less in their savings per month as a result of the interest rate hike in January.

Canadians saw $149 less in their savings each month after the interest rate increase in January, according to an Ipos study.

One advantage of a variable-rate mortgage is that its initial interest rate is lower than that of a fixed-rate mortgage. The possibility exists that the Bank of Canada will increase interest rates to the point where you end up paying significantly more throughout the life of the loan.

Fixed-rate loans bind you to a higher interest rate in the near run but keep it constant for the duration of the loan, giving you additional comfort.

Variable rates change in response to changes in prime rates.

“A 25 [basis point] increase in prime raises payments on adjustable-rate mortgages by around $12/month per $100,000 of borrowing,” according to mortgage expert Robert McLister.

According to Jesse Abrams, CEO of online mortgage broker Homewise, “those who are spending a couple of thousand dollars a month on their mortgage could see that [amount] grow dramatically if the prime rate goes up by 1 percent.” We may be talking $30,000 to $40,000 over five years. A percent more can make a big difference.

Borrowers with fixed-rate loans, like fixed-rate mortgages, are exempt from this rule.
When a rate is “locked in,” it means that the lender will guarantee it for the whole length of the loan or mortgage.

In this case, notwithstanding changes in the external market, the borrower is still required to pay the same rate. High-interest savings accounts (HISAs) and other investment instruments, such as guaranteed investment certificates, are affected by changes in the prime rate as well (GICs).

Because financial institutions have more freedom to compete on the interest rates they offer, as the overnight rate rises, individuals can earn a higher return on their investments.

Sure raise rates and then blame the potential impact on someone else so irresponsible.

BNN Bloomberg tweeted,
Governor Tiff Mackem said he knows there’s going to be “some pain” stemming from higher #interestrates, but that they’re necessary to bring price stability back.

Governor Tiff Mackem said he knows there’s going to be “some pain” stemming from higher #interestrates, but that they’re necessary to bring price stability back.

Is snapchat down today? When will the problem be sorted out? Explained

[…] #NBA KEEP READING, How did Shawn Drumgold die? What happened? Cause of death Explained Why did Bank of Canada hike interest rate? How will it affect you? Follow us on Twitter to get instant notifications on the latest news. […]