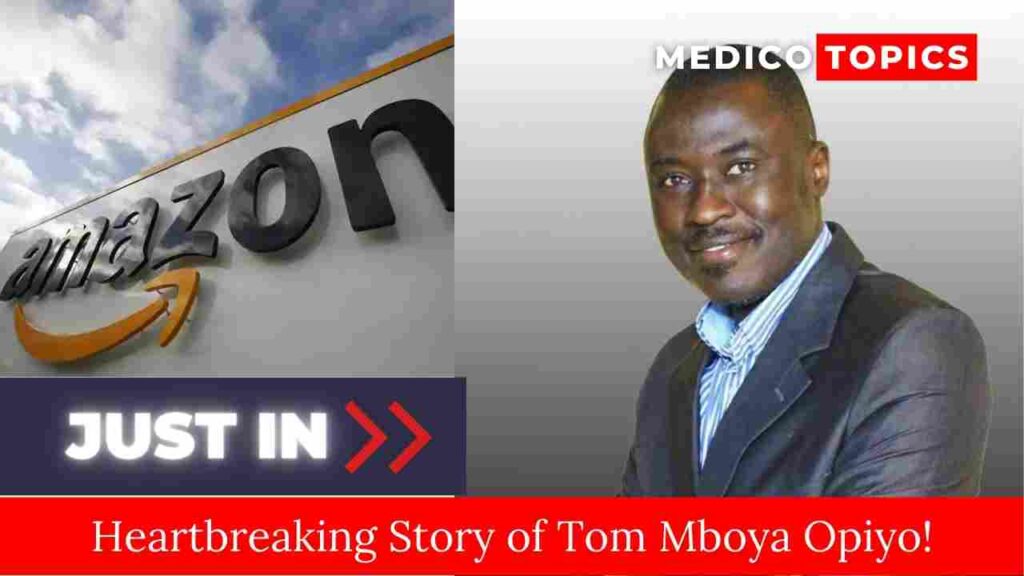 Amazon stated earlier this month that it would begin terminating 18,000 employees worldwide on January 18. One of the 18,000 individuals affected by Amazon’s huge layoffs was Tom Mboya Opiyo. After being negatively affected by the termination, Opiyo posted about his experience on LinkedIn. Let’s see about it in detail.

Who is Tom Mboya Opiyo?

Four days prior to his departure for Europe in search of a job at Amazon, Tom Mboya Opiyo, an IT professional from Kenya, was informed that the opportunity had failed as a result of business changes at the global e-commerce giant.

Tom Mboya Opiyo revealed his experience in a LinkedIn post, explaining that he had sold his house and cars in anticipation of a move that never happened. 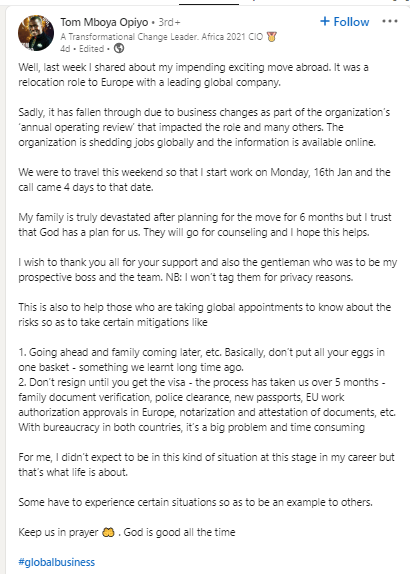 Opiyo received a distressing call informing him that the position had been eliminated, just as everything appeared to be in order and the family only needed to fly. The multinational told him that he was one of the thousands of applicants who had their offers cancelled since the company was doing an “annual operations review” at the time. Opiyo said to Hillary Lisimba of TUKO.co.ke that he was originally scheduled to begin in October but that the date kept shifting because of complications with his work authorization in Luxembourg. Due to procedure delays and recent changes, a new start date of January 16, 2023, was chosen.

The IT professional said on LinkedIn,

“Well, last week I shared about my impending exciting move abroad. It was a relocation role to Europe with a leading global company. Sadly, it has fallen through due to business changes as part of the organization’s ‘annual operating review’ that impacted the role and many others. The organization is shedding jobs globally and the information is available online.”

They began applying for visas at the Belgian embassy, which handles Luxembourg after the letters eventually arrived around the end of November. Opiyo said that for the position, they had to send in their birth certificates, police clearances, marriage certificates, and requests for the Ministry of Foreign Affairs to certify their academic credentials. When they received the paperwork, the Belgian embassy, which was required to certify them, was already closed for the Christmas holiday until January 3. our days before the family was scheduled to leave, the call was made.

”We were to travel this weekend so that I start work on Monday, 16th Jan and the call came 4 days to that date.”

Opiyo claimed that after six months of preparation for the transfer, his family is sincerely devastated, but I am confident in God’s purpose for us. I hope this will be helpful, and they will seek counselling. The Kenyan IT expert said that he had sold his house and his cars to go to Europe after his kids finished high school. While adjusting to the blow, they would have to start anew.

He gave those who were considering moving for work two pieces of advice:

”For me, I didn’t expect to be in this kind of situation at this stage in my career but that’s what life is about. Some have to experience certain situations so as to be an example to others. Keep us in prayer. God is good all the time.”

He ended his post by requesting that his readers remember him in their prayers.

For all tech professionals worldwide, 2023 has started poorly. According to reports, in the first 15 days of this month, 91 organizations fired more than 24,000 tech workers, indicating that worse days are still to come. Then, there are numerous job postings, offers of assistance for friends and coworkers who have been laid off, and tips for overcoming professional obstacles on LinkedIn. One message particularly caught our eye: it described an IT professional whose plans to settle in Europe were dashed when Amazon fired him four days before his arrival.

Amazon stated earlier this month that it would be laying off 18,000 workers worldwide, including roughly 1,000 in India. Amazon received a summons last week from the Pune office of the Labour Commission about its policy on mass layoffs and voluntary separation. In a letter to the union representing IT workers, it was requested that a joint meeting regarding the company’s alleged layoffs in India take place on January 17. “Thousands of employees’ and their families’ livelihoods are now at danger.

According to the Industrial Dispute Act’s processes, an employee who is listed in the establishment’s muster records cannot be terminated by the employer without first receiving approval from the relevant authorities, according to a statement from NITES President Harpreet Singh Saluja. Amazon offered its employees a voluntary resignation policy in November of last year.