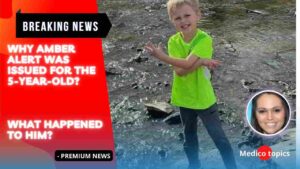 Brixton Sisk, a five-year-old boy, is the subject of an Amber Alert issued by the Kansas Bureau of Investigation (KBI). Let us see why Amber Alert was issued for the 5-year-old.

What happened to Brixton Sisk?

Brixton was last seen earlier Thursday afternoon at the Rose Hill School Daycare. He stands four feet and a half inches tall, weighs 75 lbs, and has blonde hair and blue eyes. He was last seen carrying a blue blanket and wearing grey sweatpants, a green t-shirt, and black sneakers.

A woman impersonating a social worker entered the daycare at 2:40 p.m. and took Brixton. She drove away from school in a black Chevrolet Suburban with a paper tag. The automobile was being driven by an unidentified individual.

At 7:02 p.m., KBI got information that the suspect, his male counterpart, and the youngster had swapped automobiles to a 2010 Volkswagen Jetta with Kansas license 461NWF and were possibly exiting the area.

Why Amber Alert was issued for the 5-year-old

Brixton’s biological mother, Danielle Banzet, was revealed as the lady who had her parental rights taken away by the court.

Banzet’s behavior previous to the kidnapping, including threats of violence, indicates that Brixton is at grave risk, according to KBI.

Danielle Banzet is a woman 31 years old. She stands 5 feet 4 inches tall and weighs 125 lbs. Banzet has brown eyes and blonde hair. She has long blonde hair and was last seen wearing a long red and white dress with spectacles (dyed after the photo).

Brixton Sisk, 5, of Rose Hill, was found safe in Oklahoma on Thursday, May 19, after his mother pretended to be a social worker and pulled him out of a children’s center with an unknown guy. KBI then issued an Amber Alert for Sisk.

An Amber Alert for a 5-year-old kid from Rose Hill, Kansas has been canceled.

The Oklahoma Highway Patrol successfully recovered Brixton Sisk, and the culprits were apprehended, according to authorities. Brixton was abducted by his 31-year-old mother on Thursday afternoon, according to the Kansas Bureau of Investigation.

Danielle Banzet, posing as a social worker, allegedly entered his school and abducted him. Banzet’s parental rights were reportedly terminated by the court.

Banzet left in a black Chevrolet Suburban 1500 with a paper 30-day tag, according to the KBI. The vehicle with Banzet and the youngster was being driven by an unknown male. They transferred to a 2010 Volkswagen Jetta, according to authorities. In rural Cowley County, the Jetta was discovered abandoned.

How did Abdul Gaffar Chowdhury die? Cause of Death Explained

What happened in High School Graduation at MTSU?