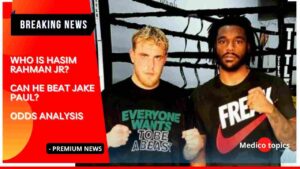 Hasim Rahman Jr, Jake Paul’s new opponent, has previously commented on how he believes a battle between the two will go. Let’s see Jake Paul vs Hasim Rahman odd analysis.

Who is Hasim Rahman?

The younger Hasim Rahman, the former WBC heavyweight champion’s son, was just eleven years old when his father overcame Lennox Lewis to become the best heavyweight in the world.

Rahman Jr. made his professional debut in 2017 by knocking out Ralph Alexander in one round, following in his father’s footsteps into the sport of boxing. He won his next two matches in the first round as well, but his fourth match against Deon Hale required extra time.

Hasim Rahman Jr. (12-1) made his professional debut in 2017 and is the son of the former lineal heavyweight champion. In 2021, he had three victories, including two knockouts. Rahman’s most recent contest ended in a TKO loss against James McKenzie Morrison in April.

Why is he going to fight Jake Paul?

Jake Paul wasn’t originally going to pick Hasim Rahman Jr. The long-awaited bout between the YouTube celebrity and Tommy Fury of Britain has been called off due to the younger brother of Tyson Fury’s immigration troubles.

Rahman was the name that stuck out when Paul intended for the show to go on. Rahman meets the requirements for someone with name value who can keep the show going because his father has a high profile in boxing because to his heavyweight past.

On August 6, Jake Paul and Amanda Serrano will return to the ring. At 9 p.m. ET, the main card is scheduled to start. Depending on how long the fights on the undercard go, Paul and Rahman should arrive at the ring at about 11:30 p.m. ET.

In April, Jake Paul was observing history being made from the center of Madison Square Garden as a sold-out crowd.

The major event of “The World’s Most Famous Arena” was Amanda Serrano and Katie Taylor, both of whom had Paul on their side. He will now try to enter the annals of history. However, it will be against an underdog opponent. 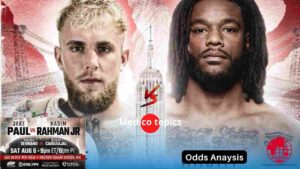 Paul declared he would be making a comeback on August 6. His Showtime-produced fight will be the main event at MSG this time. Hasim Rahman Jr. will be his opponent.

This comes after Tommy Fury could not enter the country for a scheduled fight with his opponent Paul. Paul gave Fury a choice and then left.

According to ESPN, the match will take place at the 200-pound cruiserweight limit.

Serrano’s comeback will serve as the co-main event, or the “second main event,” according to Paul. She will face Brenda Carabajal to defend her WBC, WBC, and IBO featherweight titles.

Rahman Jr.’s lone loss came from Morrison, who he stopped in the third round after being caught.

Due to his expertise, he should start this fight as the favourite and will have support from many people. If Paul can win, it might be the turning point in his professional fighting career.

There are no odds available right now for Jake Paul’s upcoming match. As time goes on, The Sporting News will continue to provide updates.

Paul engaged in three fights in 2021. He defeated Tyron Woodley in August and Ben Askren in April, both former MMA champions.

Fury had to cancel his December fight after breaking a rib, which forced him to do so. The rematch was scheduled when Woodley took his place. Paul defeated him by knockout in the sixth round of the fight.

Prior to Fury’s withdrawal from the fight due to travel complications, Fury and Paul had made an agreement to fight. According to TMZ, Fury’s problems may have been related to his family’s apparent connections to Daniel Kinahan.

How Dale Douglass died? cause of death explained.

How did Bryan Marchment die? NHL defender’s Cause of death Explained