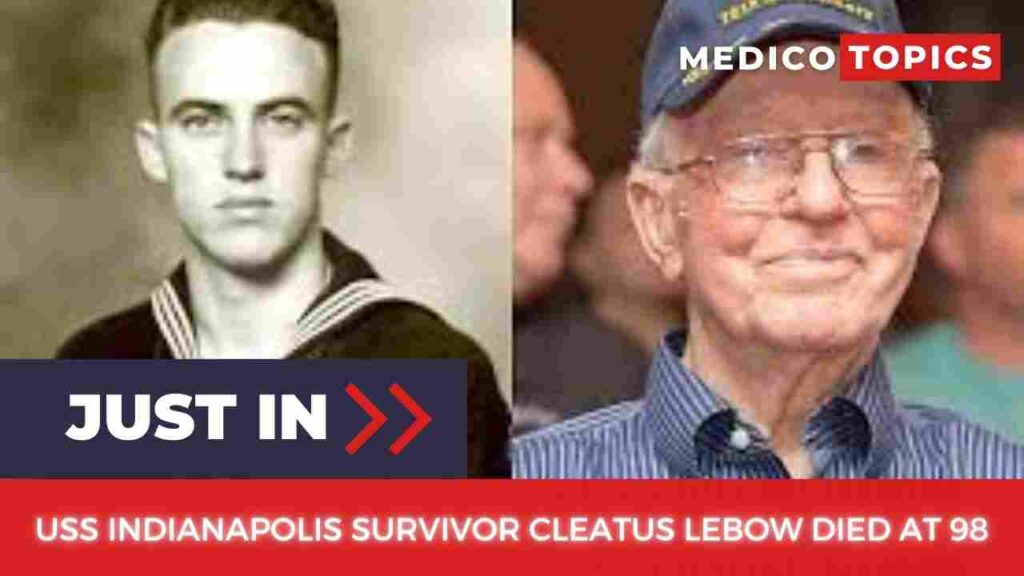 USS Indianapolis Survivor Cleatus Lebow passed away at 98. Let’s see what happened to him and Cleatus Lebow cause of death in detail.

How did Cleatus Lebow die?

USS Indianapolis confirmed the passing of Cleatus Lebow on their Facebook page. The messge reads,

It is with the deepest sadness that we must share that USS Indianapolis Survivor Cleatus Lebow passed away earlier today.

Cleatus, 98, was a lifelong Texas resident, having grown up with 8 brothers and sisters in Abernathy. As a teen, he joined the Navy and was shortly thereafter assigned to USS Indianapolis in January of 1944. He helped the ship earn 7 of her 10 battle stars. Cleatus was a Fire Controlman 3rd class who worked as a gunnery range-finder for most of those battles including Marianas, Tinian, Iwo Jima, and the pre-bombardment of Okinawa.

Following the war, Lebow returned home to Abernathy and worked for the telephone company, where his military experience was helpful. He worked in various locations in that field for 35 years prior to retiring. He became an integral member of the USS Indianapolis Survivors Organization and attended many reunions through the following decades, honoring his shipmates and sharing their stories with everyone he could.

With his passing, there is one remaining USS Indianapolis survivor, Harold Bray, Jr.

Cleatus Lebow cause of death

So far USS Indianapolis didn’t announce any cause of death for Cleatus Lebow. Yet again considering his age Facebook users claims, that he died of natural causes. Cleatus was not a known patient as far as the reports concern.

Medico topics have been trying to reach out to the family and relatives for comment on the incident. So far no responses have been received. We will update the page once enough information is available. More information on Cleatus Lebow cause of death will be added soon.

Condolences pouring in for Cleatus Lebow

Fair winds and following seas. Reunite with your shipmates and rest easy, sir, we have the watch.

RIP Cleatus thank you for your service. He survived hours in the shark infested water after his ship delivered the bomb that helped end the war.

What a blessing my friendship with Cletus has been. I will miss our weekly visits. What a wonderful man. My uncle, Robert Edward Coleman, served with him on the Indy. I always felt a special connection with him. My condolences to his family.

This is a developing story. Come back later for new updates.

How did Andre Payette die? Newcastle Vipers legend cause of death

What happened to Dr. Chris Hoskins? Cause of death Explained