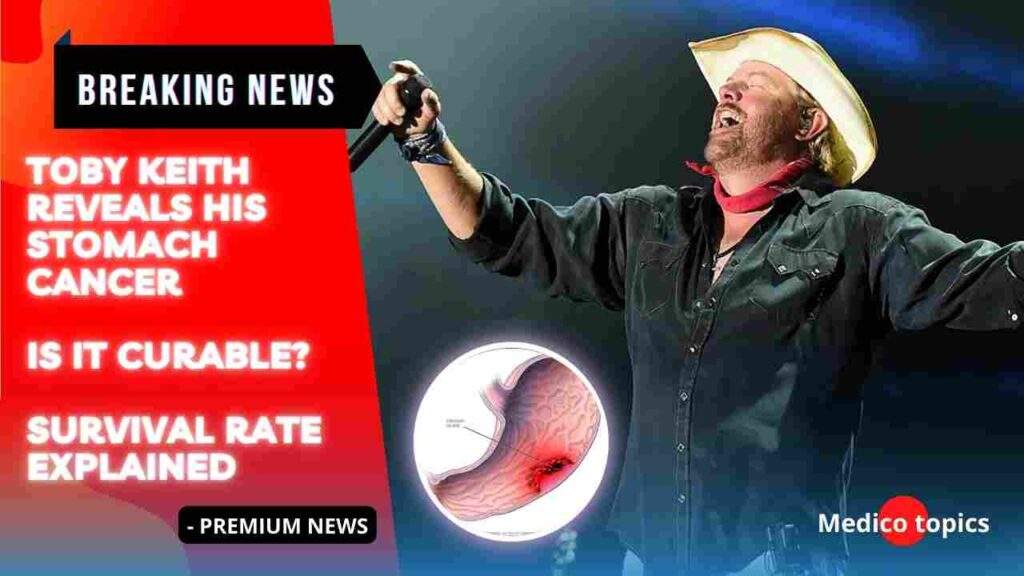 Toby Keith, a country music singer, revealed on Sunday that he had been battling Stomach cancer for several months. Following his cancer diagnosis, the country music star has spent the last six months undergoing chemotherapy, radiation, and surgery. Let’s see whether Toby Keith Stomach cancer is curable and what are the survival rates on treatment for Stomach cancer.

Keith stated in an online statement that he was diagnosed with stomach cancer last fall and that he has spent the last six months undergoing chemotherapy, radiation, and surgery.

“Thus far, so good. I need time to heal, breathe, and rest. I am looking forward to spending this time with my family. But I’ll see the fans sooner rather than later. I simply cannot wait, “Keith penned a letter.

The Nashville Songwriters Hall of Fame member was supposed to play two performances next week in Illinois and Grand Rapids, Michigan, according to his official website. He also has a few shows planned from mid-July until early August. The Ohio State Fair, where Keith was supposed to play on July 28, acknowledged that the event had been canceled and that the ticket holders would be refunded.

The Ohio State Fair tweeted, “Our thoughts go out to Toby Keith as he bravely battles illness.”

Keith has been a champion for cancer patients throughout his career. In 2006, he established the Toby Keith Foundation to assist children with cancer throughout Oklahoma. The organization opened the “OK Kids Korral” in 2014, providing a place for child cancer patients and their families to stay while getting treatment at The Children’s Hospital at OU Medical Center.

Survival rates can tell you what proportion of persons with the same type and stage of cancer are still alive after a particular period of time (typically 5 years). They cannot predict how long you will live, but they can help you understand how probable it is that your therapy will be effective.

Remember that survival rates are estimates and are frequently based on the outcomes of large numbers of individuals who had certain cancer, but they cannot predict what will happen in each person’s case.

As per the star he is currently on chemotherapy, radiation, and surgery, which means he is either in Stage 3 or 4 of Stomach cancer.

As per the NCBI research on the Survival of metastatic gastric cancer, Patients in the age group 55 to 64 can survive anywhere around 3 months to 6 months after diagnosis if not treated. Patients who got any treatment had significantly improved survival. The median survival time after a Gastrectomy or local surgery was 8 months. Similarly, those who had radiation treatment had a higher chance of survival.

Beth Tomsic said, “My dad was diagnosed with stage 4 stomach cancer almost 4 years ago. He was initially given 3-6 months to live. He’s battled it for almost 4 years and his tumor is now gone and he is basically cancer-free. Huge prayers coming your way. My family and I know all too well what you’re going through.”

Connie S Gilliland said, “This the First I’ve heard about this Toby??? God, is Good 👍🏼 Always Watching Over You Praying For You”

Tina Morehart said, “Sorry to hear this. Prayers for a speedy recovery. May the good lord put his healing hands on you”

How did Hilary Devey die? Dragons’ Den Star Cause of death Explained

Couldn’t have happened to a worse human. Bravo, Cancer!!

[…] the type of rugby character as lacking in hubris as he was full of sumptuous talent KEEP READING, Toby Keith Reveals Stomach cancer, Is it curable? Survival rate Explained How did Hilary Devey die? Dragons’ Den Star Cause of death Explained Follow us on Twitter to […]