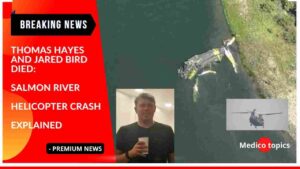 Who is two helicopter pilots?

According to Traci Zimmerlee, a district ranger with the Lowman Ranger District in Lowman, Idaho, the two people on board, Thomas Hayes, 41, of Post Falls, Idaho, and Jared Bird, 36, of Anchorage, Alaska, were decorated military veterans and seasoned pilots who worked for ROTAK Helicopter Services.

The US Forest Service announced on Friday that the two pilots of a firefighting helicopter that crashed in Idaho had perished.

Thomas Hayes, 41, of Post Falls, Idaho, and Jared Bird, 36, of Anchorage, Alaska, both died from injuries they sustained after their CH-47D Series “Chinook” crashed in the Salmon River at around 3:30 on Thursday, according to Mary Cernicek with the Salmon-Challis National Forest.

Where the pilots worked?

The pilots worked for ROTAK Helicopter Services in Anchorage, which was hired to assist in putting out the Moose Fire, which was raging about 21 miles (34 kilometres) north of Salmon.

According to Cernicek, both pilots were “very experienced” and former service members. The men could not be saved, she claimed, despite the fact that rescuers who responded to the incident were able to remove them and take them to hospitals.

ROTAK requested prayers and respect for the families’ privacy on its website after confirming the disaster “with broken hearts.”

The company stated: “ROTAK Helicopter Services is closely coordinating with all appropriate agencies and will issue a detailed statement as information is released.”

Four first responders were killed in another helicopter crash in New Mexico less than a week before to the disaster in Idaho. The chopper came down quickly, landing upright before tumbling over, according to authorities in New Mexico. The crew had just finished a firefighting job and was on their way home to Albuquerque. One of the four victims who perished in the collision made a 911 call before passing away from his injuries.

The Moose Fire in Idaho has been fought by around 700 firefighters. The National Interagency Fire Center reported in an incident report on Friday that nine aircraft were being employed to support ground firefighting operations with water bucket drops since the fire broke out on Sunday.

On Friday, the fire was threatening a number of structures and was threatening an area of roughly 37 square miles. Fire managers predicted that the fire would spread as long as the hot, dry weather persisted in the area. The region received a “red flag” warning because wind gusts could reach up to 35 mph.

According to Cernicek, the helicopter wreckage was still in the Salmon River, and NTSB investigators were on their way to the scene.

Authorities prohibited day trips for recreational purposes along that section of the river, which is popular with rafters and tourists. People taking multi-day river cruises can still access it, according to Cernicek.