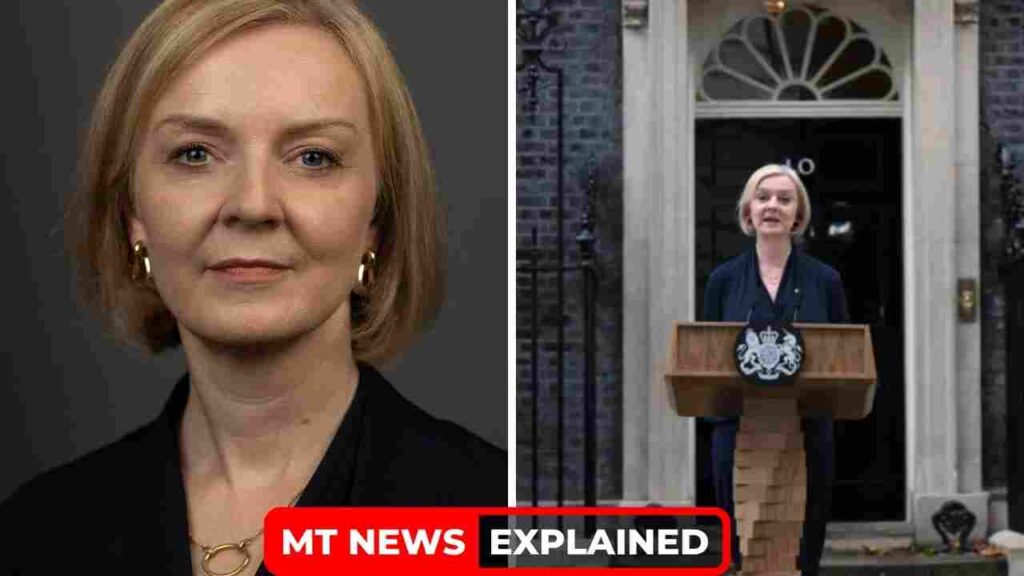 Liz Truss, the British Prime Minister, has announced her resignation as head of the Conservative Party after her policies caused economic chaos and internal divisions within the party. Truss resigned from her PM post on October 20. Let’s see everything about her resignation and what happens next in detail.

After less than two months in office, British Prime Minister Liz Truss gave a speech outside Downing Street in which she announced her resignation. On Thursday, Truss said she could not keep the commitments she made while competing for Conservative leader because she had lost the confidence of her party.

Truss, who has only been prime minister for 45 days, declared that she will continue in those roles until a replacement was chosen.

I recognise however that, given the situation, I cannot deliver the mandate on which I was elected by the Conservative Party.

I have therefore spoken to His Majesty The King to notify him that I am resigning as Leader of the Conservative Party.

Graham Brady, the head of the 1922 Committee for the Conservative Party, stated that the winner of the leadership campaign should be announced by October 28. General elections were called for immediately by the opposition Labour party.

As a result of the financial market turmoil brought on by her economic policies, Truss had the least approval rating of any British leader in decades. As the leader with the shortest tenure in the nation’s history, Prime Minister Liz Truss announced her resignation, prompting a search for her successor.

Who is Liz Truss?

Mary Elizabeth Truss is a 47-year-old British politician who has served as the prime minister of the United Kingdom since 6 September 2022. She resigned from her PM post and also declared her intention to step down as Conservative Party leader. She had previously served in a number of Cabinet positions. Since 2010, Truss has been the South West Norfolk district’s Member of Parliament (MP).

Lizz Truss was the leader of the Oxford University Liberal Democrats and a student at Oxford’s Merton College. She joined the Conservative Party in 1996. She was chosen as the MP for South West Norfolk in the 2010 general election after two failed attempts to secure a seat in the House of Commons.

What is the reason behind her big decision?

Lizz Truss decided to resign after a serious economic and political crisis. Her tumultuous six weeks in power, during which her support rating dropped to the lowest of any British prime leader in decades as the markets reacted negatively to her proposal to cut taxes while increasing expenditure. This caused a serious economic crisis in the UK.

Some of the main reasons for the economical crisis are:

Which economic strategies did Ms. Truss attempt to implement?

On September 6, Lizz Truss took office as prime minister after winning the support of her party’s members in a leadership contest over Rishi Sunak, Boris Johnson’s chancellor of the exchequer, whose resignation eventually toppled the previous.

Ms. Truss intended to borrow money to help customers with their energy prices while also lowering taxes to promote economic growth. The independent fiscal monitor of the government did not approve the plans.

There will be a leadership election to be completed in the next week.

This will ensure we remain on a path to deliver our fiscal plans and maintain our country’s economic stability and national security.

I will remain as Prime Minister until a successor has been chosen.

Why did her economic proposals cause a stir?

At a period of skyrocketing inflation, she and her then-Chancellor Kwasi Kwarteng suggested tax cuts, one of which was targeted at the wealthiest earners in the United Kingdom.

Liz Truss claimed she was unable to carry out the Conservative Party’s mandate for her election. However, the tax cuts’ lack of funding alarmed the markets, sending the pound down against the dollar, rising bond yields, and forcing the Bank of England to step in. When Mr. Kwarteng left his position as Treasury secretary, Jeremy Hunt reversed nearly all of the tax-cutting measures.

There has been public outrage over the Truss government’s economic policies, which included dramatic tax cuts followed by a swift U-turn and rollback.

What happens next for the UK, and who becomes Prime Minister?

After David Cameron, Theresa May, and Boris Johnson, Truss is the fourth Conservative prime minister to leave the office early.

“The Conservative Party has proved it no longer has the mandate to govern. The Tories cannot respond to their latest shambles by yet again simply clicking their fingers and shuffling the people at the top without the consent of the British people. We need a general election – now. After 12 years of Tory failure, the British people deserve so much better than this revolving door of chaos.”

Who is Aman McCutchen? Suspect in shooting of Robby Mathews Explained

How did Sam Westmoreland die? Mississippi State football player cause of death Explained